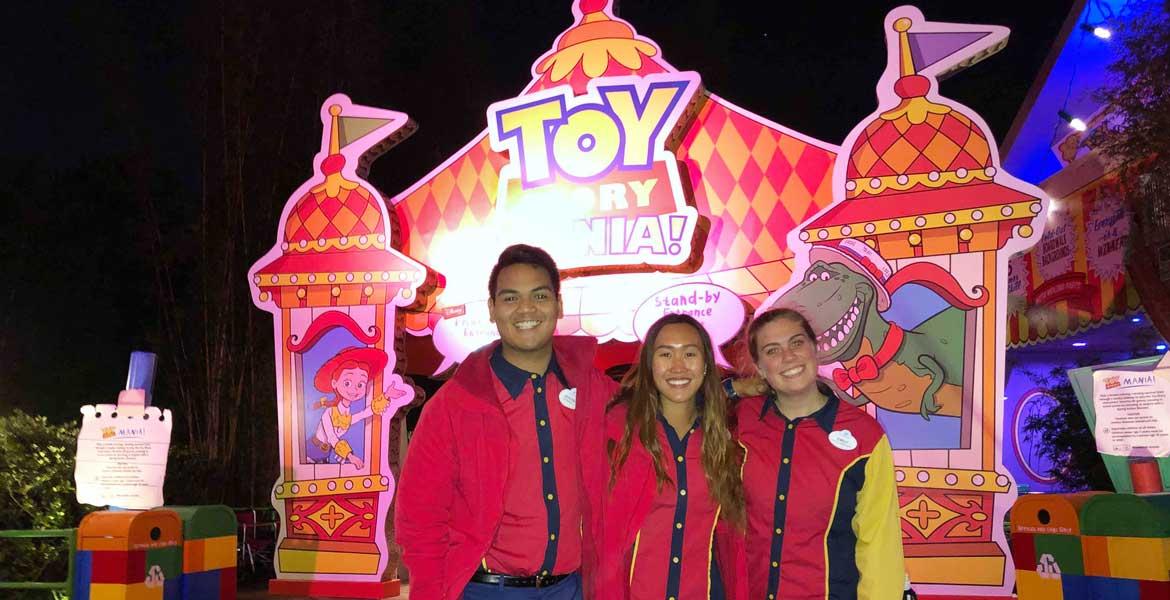 UA electrical engineering student Tiffany Ma (center) with some of her colleagues at the Disney College Program in Orlando, Florida.

By
Emily Dieckman
Time to read
3 minutes
Print
a- a+
Read so far
Engineering undergrad builds communication and teamwork skills in the Disney College Program.

Tiffany Ma has been a Disney fan for a long time. Her favorite character is Winnie the Pooh. She loves that when guests celebrate their birthdays at the park, they can receive special pins with their names on them. She’s been to the Disneylands in California, Hong Kong and Tokyo.

“That was probably part of how Disney was so captivating to me, because I was able to see how it looked around the world,” said the University of Arizona electrical engineering junior. “When people walk into the park, you get that magical feeling like you’re a little kid again.”

She also dreamed of growing up to be an engineer. Her dad, who works at Intel, used to buy her circuit kits to do electrical experiments when she was a kid. The perfect job, she decided, was to be an “imagineer,” one of the engineers behind the design and construction of Walt Disney theme parks.

The honors student took a step toward making her dream come true when she participated in the Disney College Program at Disney World in Orlando, Florida, from June 2018 to January 2019.

“She always had the technical abilities, but her confidence in terms of explaining concepts and meeting people has just doubled since she returned from the program,” said Kathie Melde, associate dean of faculty affairs for the College of Engineering and professor of electrical and computer engineering, or ECE.

From Chandler to Tucson to Orlando

Ma grew up in Chandler, Arizona, and decided to attend the UA after she attended the Summer Engineering Academy, a hands-on engineering camp for high schoolers, and fell in love with the close-knit campus.

Ma was learning about programming languages in one of her honors classes and decided to look into an application that particularly interested her: Disneyland’s new MagicBands, radio frequency identification, or RFID, bracelets that store park-goers’ information and act as everything from a hotel key to a method for making dinner reservations and small purchases.

She was fascinated, and spent fall 2017 researching the “internet of things” and the ethical considerations Disney took into account when designing a device to hold guests’ personal information. In spring 2018, she worked with Melde, an antenna specialist who taught her how to use a spectrum analyzer to measure the frequencies of antennas and see how they affected the frequencies of MagicBands.

Then, Ma decided she wanted to go work at the parks herself. She joined the Disney College Program, excited to learn about the operation of the parks’ engineering services and facilities, meet imagineers, and work alongside Disney Engineering professors. She attended several engineering seminars throughout the program, but some of the most valuable experiences she had were when networking with imagineers and other engineering services people while she worked at the park’s Toy Story Land.

“A lot of them were entry-level people who’d just got hired, and many of them did the Disney College Program or an internship with Disney as well,” she said. “It was a good experience to learn about how they got into the job I want.”

Helping Others From Outside Her Comfort Zone

Ma isn’t inexperienced with stepping out of her comfort zone. Her freshman year, she joined the student club 3D Printing For Everyone. Not only was she the only woman in the club, but she was also younger than everyone else -- an intimidating set of circumstances, at first.

“But then all of them graduated, and I became president my sophomore year,” said Ma, who is also a member of Engineering Student Council. “I learned how to use SolidWorks, Onshape and different 3D-printing software. Even in my classes now, it’s mostly males. But I have a lot of female friends who are engineers, and I think it’s good: We build each other up and work together.”

Everyone there is kind of in the same boat: They all just want to make magic and have a good time and learn and have different experiences.”

She’s also a supplemental instruction leader, sitting in on an introductory physics course twice a week and holding study sessions to help students understand the material -- she attended those study sessions every week when she was a freshman, so now she finds fulfillment in helping other students reach their own “lightbulb moments.”

Ma said she gets a similarly altruistic thrill from being able to make someone’s day as a Disney employee. So she doesn’t hesitate to recommend the Disney College Program to other students.

“You meet people from all over the world -- from Australia, Italy, Germany -- and we just all come together,” she said. “I went there not knowing anybody, and it was halfway across the country, so it was kind of scary at first. But everyone there is kind of in the same boat: They all just want to make magic and have a good time and learn and have different experiences.”