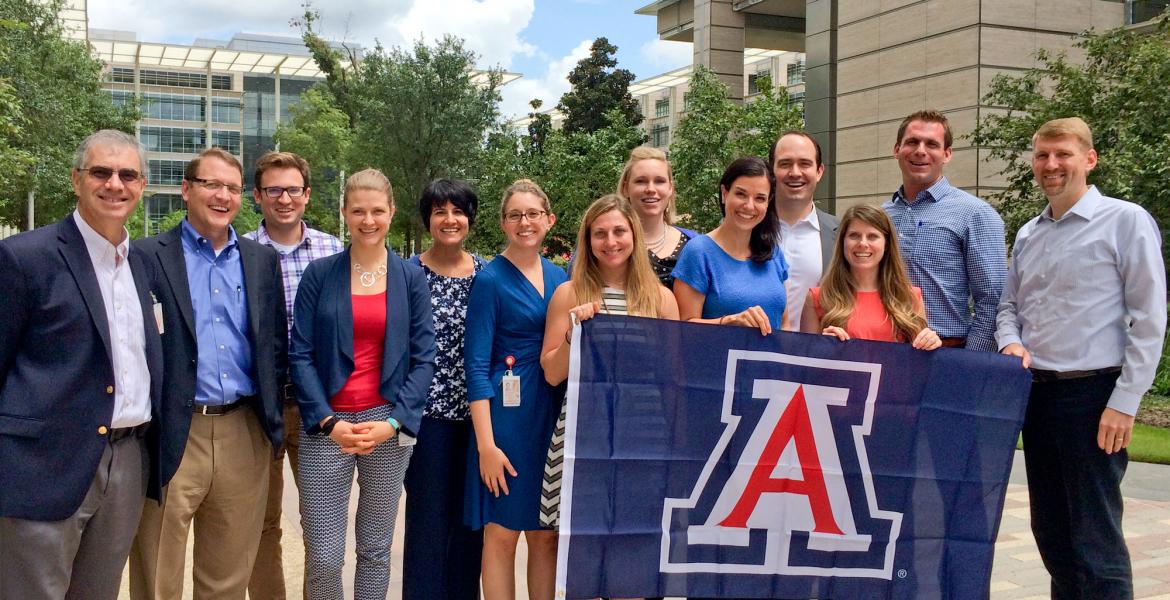 Mechanical engineering alumnus Eric Carmichael, second from left, hosts then College of Engineering Dean Jeff Goldberg, left, on a February 2018 visit to the BayouCats UA alumni group at the ExxonMobil campus in Houston.

By
Emily Dieckman
Time to read
3 minutes
Print
a- a+
Read so far
College supporters give $9.3 million in 2018 financial year.

Thanks to the generosity of more than a thousand individual donors and a lot of hard work, the College of Engineering’s development team raised more than $9.3 million in fiscal year 2018. Gifts from donors ranged from $10 to $1.5 million, and every dollar helped further the college’s mission to educate the next generation of engineers.

“We truly are grateful for every gift that comes to the College of Engineering,” said Margie Puerta Edson, senior director of development and alumni relations for the college. “There is a story behind each gift and a specific purpose that our donors want to achieve with their philanthropy. As a development team, it is our privilege to get to work with alumni and friends of the college to help them tell their stories and make amazing things happen for the college.”

John H. Kane graduated from the UA with a degree in mining engineering in 1960. Though he died in July 2017, he included a planned gift to the college in his estate plan for after his death totaling at more than $1.3 million. The money will fund an endowed scholarship to support the cost of attendance for students and a general endowment for the Department of Mining and Geological Engineering.

“A planned gift doesn’t cause you to commit to any money now, but it allows you to have a say over what your legacy is going to be at the University and with the college after you’re gone,” said Chris Fraker, the senior director of gift planning at the UA Foundation.

Kane spent part of his career working for Asarco Inc., a mining company based in Tucson. He never strayed far from his metallurgical roots, accumulating a vast collection of minerals over the course of his life. Though he made small donations to the university over the years, this planned gift is the largest by far. Fraker advises potential donors, particularly those interested in making planned gifts, to work closely with the Foundation through the gift-giving process. Making sure the language in official paperwork is clear and specific ensures that donors’ money will fund exactly what they want.

“If you have charity in your heart, and want to set your legacy here, a planned gift is a good way to start thinking about it,” he said. “These are simple but powerful gifts. When someone includes the university in their estate plan, that’s them including us in their family. We take the importance of that very seriously.”

Eric Carmichael graduated with his bachelor’s degree in mechanical engineering in 1990. Today, he works as the Americas fuels marketing manager at ExxonMobil. Though he now works in marketing, he started off in the technical world, and says he still uses his engineering education every day at work.

“I love the UA,” he said. “It played an important role in my development, and I really think the engineering program felt personal. People in the program are very giving of themselves.”

He made a donation through the College of Engineering’s da Vinci Circle, a community of donors who make unrestricted gifts to the college of more than $2,500 per year. He also took advantage of ExxonMobil Foundation’s Educational Matching Gift Program, which matches employees’ donations to higher education institutions three to one. In 2017, the company provided $41.5 million to colleges, universities and other organizations that support higher education all over the world -- with $37.9 million of that money benefiting higher education institutes in the United States.

“This really starts allowing employees to make a meaningful contribution to their universities,” Carmichael said. “I’d encourage anyone who works for a company with a matching program to consider that no amount is too small to get started. You can’t imagine how over time you’re able to grow in what you can contribute as your career progresses.”

Carmichael has been a supporter of the UA for many years. Not only does he support the college financially, but he has also co-hosted gatherings of UA alumni on the ExxonMobil campus. In 2017, he outbid alumni from Texas A&M and UT Austin to promote the UA at “Raise Your Flag Week” at his son’s Texas high school. The UA colors flew high in the Lone Star state for a week in October, keeping the Wildcat spirit strong well beyond the borders of Tucson.