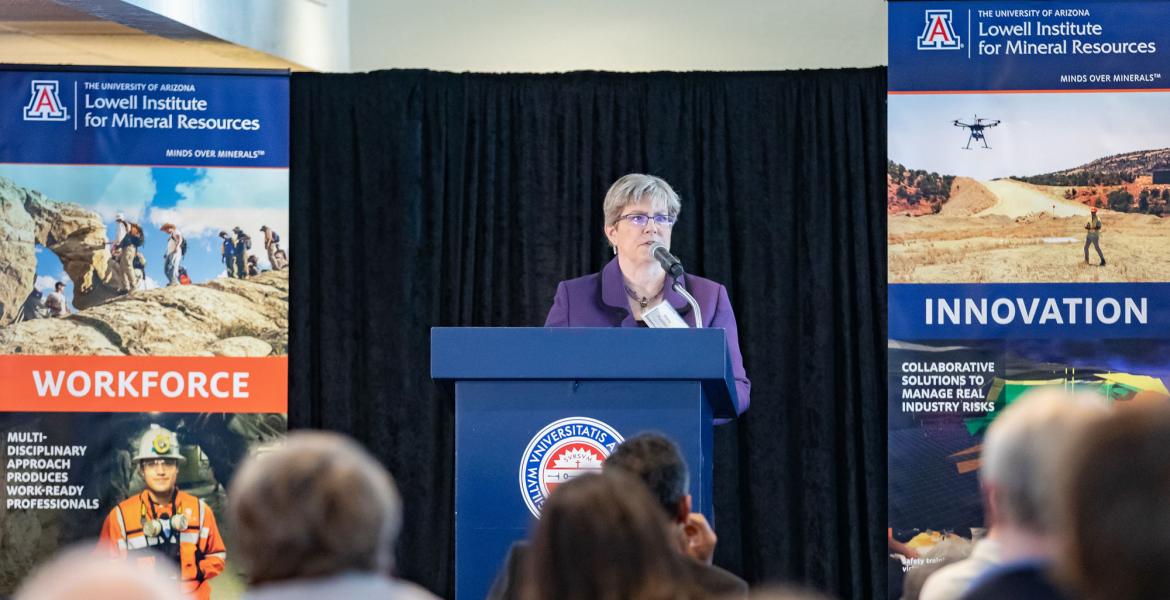 Mary Poulton, co-director of the Lowell Institute for Mineral Resources and former head of the UA College of Engineering's Department of Mining and Geological Engineering, addresses delegates at the IMR mining summit. Poulton was inducted into the American Mining Hall of Fame in 2009 and was the college's first woman department head.

Could Southern Arizona Become the Silicon Valley of Mining?

Arizona has long been known as “The Copper State” for its abundance of natural resources and thriving mining industry.

In a summit sponsored by the University of Arizona’s Lowell Institute for Mineral Resources, the Arizona Mining Association, and the Arizona Rock Products Association, Southern Arizona mining industry leaders reflected on the state’s rich history and how, with the right mix of raw resources, university innovation and industry support, they could be a part of the summit’s title: Securing Arizona’s Future as the Silicon Valley of Mining.

“Our world is changing,” said Brad Ross, director of the Lowell Institute's Geotechnical Center of Excellence and professor of practice in the Department of Mining and Geological Engineering. “Compared to 1950, we mine 10 times as much copper today, we use three times as much copper per person and there are three times as many people. We are the industry that has to supply these resources to all of these people.”

The mining industry occupies a key role in the UA’s new strategic plan, spearheaded by President Robert C. Robbins and focused on the Fourth Industrial Revolution, or the convergence of the physical, digital and biological worlds.

Mary Poulton, co-director of the Lowell Institute, researched innovation hubs such as Silicon Valley, Norte Portugal, London and Tel Aviv and found that a similar convergence of expertise and resources is key to Arizona’s future as mining’s Silicon Valley. Southern Arizona shares many of the key characteristics of these hubs: research universities, entrepreneurs, investment capital, a solid workforce, a business-friendly environment and integrative organizations to tie them all together. This essential integration was reflected in the diversity of summit delegates, which, in addition to industry representatives, included attendees from government agencies and from groups spanning the entire University.

According to the Kauffman Index of Startup Activity, a measure of business startup activity in the United States, Arizona was fourth in the country for the number of new startup companies created in 2017. National Science Foundation numbers from 2016 reveal that 24 out of every 1,000 individuals between 18 and 24 in Arizona earned bachelor’s degrees in science or engineering. This is higher than the national average of 21.4 and California’s number of 21.8.

Southern Arizona’s technological innovation was highlighted by representatives from local companies and industry leaders, such as Freeport-McMoRan, GroundProbe, Hexagon Mining and Newmont Mining. Robert Mcleod from GroundProbe spoke about the company’s lifesaving radar to detect submillimeter movement, 300 of which are deployed all over the world. Poulton added proudly that the local chapter of the Society of Mining, Metallurgy and Exploration’s dinner the night before had about 130 attendees, while a chapter in another part of the country might have 15 people on a good night.

“The vibrancy and the size of the mining community here is absolutely enormous,” she said.

Lowell Institute Puts the Pieces Together

The UA’s presence as a top-tier research university and the quality workforce it produces in the form of smart, experienced graduates also strengthen Southern Arizona’s position as an innovation hub. The Lowell Institute's key role, said Poulton, is to be the integrative organization that brings all of the pieces together.

“Innovation is driven by this partnership between industry, academia and government,” she said.

“The way we have structured the Lowell Institute is really to be an innovative ecosystem from the university's side. But we pull in the opportunities and challenges from our stakeholders’ side as well: from industry, from government, from NGOs.”

Looking ahead, she noted several areas where the state has room for improvement: Its research and development expenditures are about 2.4 percent of state GDP, the 18th-highest in the United States. And Arizona matches the national average for the number of patents awarded annually. But groups like Tech Launch Arizona, the office of the UA that commercializes inventions stemming from research, are helping these numbers improve. Doug Hockstad, assistant vice president of Tech Launch Arizona, said the office has seen double-digit growth in almost every commercialization metric for the last five years.

“The Fourth Industrial Revolution is here,” Ross said. “We believe the University of Arizona is in the right place to solve a lot of these things. We have the right vision, and we have the right people -- not just at our university, but across our industry and in the government.”