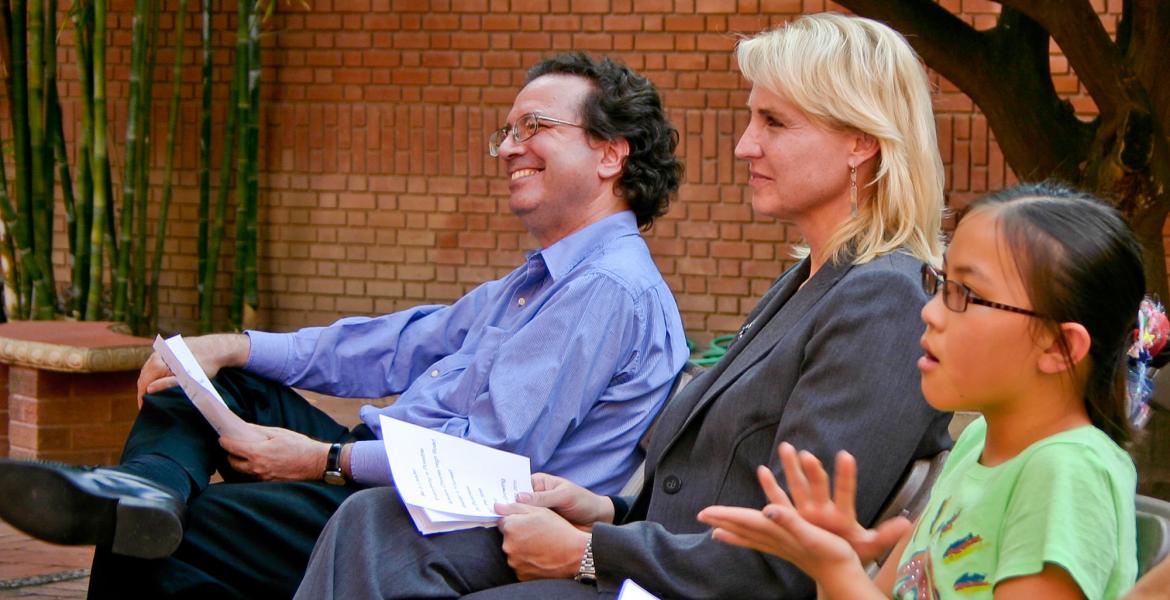 BIO5 director Fernando Martinez, left, with BME department head Jennifer Barton and her daughter Erika, enjoy a few words from Tom Keating at the inauguration of the new BME department.

By
Pete Brown
Time to read
2 minutes
Print
a- a+
Read so far
Department grows from roots that go back to the 1960s, when engineering and medical faculty studied cardiovascular problems and advanced medical instrumentation.

The UA College of Engineering recently celebrated the inauguration of its first new academic department in more than 30 years.

The Department of Biomedical Engineering, widely known as BME, is the newest undergraduate program in the College of Engineering, indeed at the UA.

U.S. News & World Report recently reported that more jobs will be created in biomedical engineering than in any other profession during the next decade. The report said employment of biomedical engineers is expected to grow by "a whopping 72 percent," creating nearly 12,000 jobs by 2018.

Professor Jennifer Barton is head of the new department, as well as assistant director of the BIO5 Institute and a member of the Arizona Cancer Center.

Speaking at the departmental kickoff event April 20, Barton reminded the audience that biomedical engineering at UA is not new. "The roots of biomedical engineering at the UA go back to the 1960s, when faculty in the College of Engineering joined up with physicians in the newly formed College of Medicine to study cardiovascular problems and advanced medical instrumentation," Barton said.

Talking to students in the audience, Barton said: "We look forward to growing an exciting, modern degree with you, which will prepare you to speak the language of engineering and medicine, and move your great ideas into the clinic and into the marketplace, where they can truly benefit human health."

Several other speakers followed Barton, and all provided their perspectives on the new department.

BIO5 director Fernando Martinez described the new department as a "starting point for new collaborations to solve those problems we haven't been able to solve." He also praised Barton for being "an engineer who can take the time to talk to doctors."

Mark Riley, head of the Department of Agriculture and Biosystems Engineering, described the formation of BME as "a monumental event" and "a very good idea that should have happened years ago."

Dean of the College of Engineering, Jeff Goldberg, congratulated the "wonderful set of undergraduates" on the new program, and said he anticipated that "BME will grow to 300 undergraduates." He added that BME students will "help people in a very fundamental manner."

Tom Keating is a UA alumnus and longtime UA supporter. The BIO5 building bears his name. Speaking at the BME launch, Keating recounted his shaky academic start back in the 1960s and offered what he described as a few beneficial ideas that had helped him.

He framed these ideas in the form of an acrostic that spelled "Bear Down":

"Always try to lead," said Keating addressing the students in the audience. "Leadership is not in the genes. It's learnable, so learn it." He also advised students to think like entrepreneurs. "Take business courses," he said. "Learn how to take a good idea and turn it into a product. In BIO5 we call it 'bench to bedside'."

His final exhortation to students was, "Never, ever stop growing until you are on your deathbed. Stay out of your comfort zone, take risks and make mistakes. When was the last time you learned anything from getting it right first time?"

Freshman computer science student Herman Ghuman agreed. "I can't wait to switch to biomedical engineering. There is so much going on," he said. "I'm good at math and physics and biology, and I'm interested in creating engineered systems that work better than biological systems."