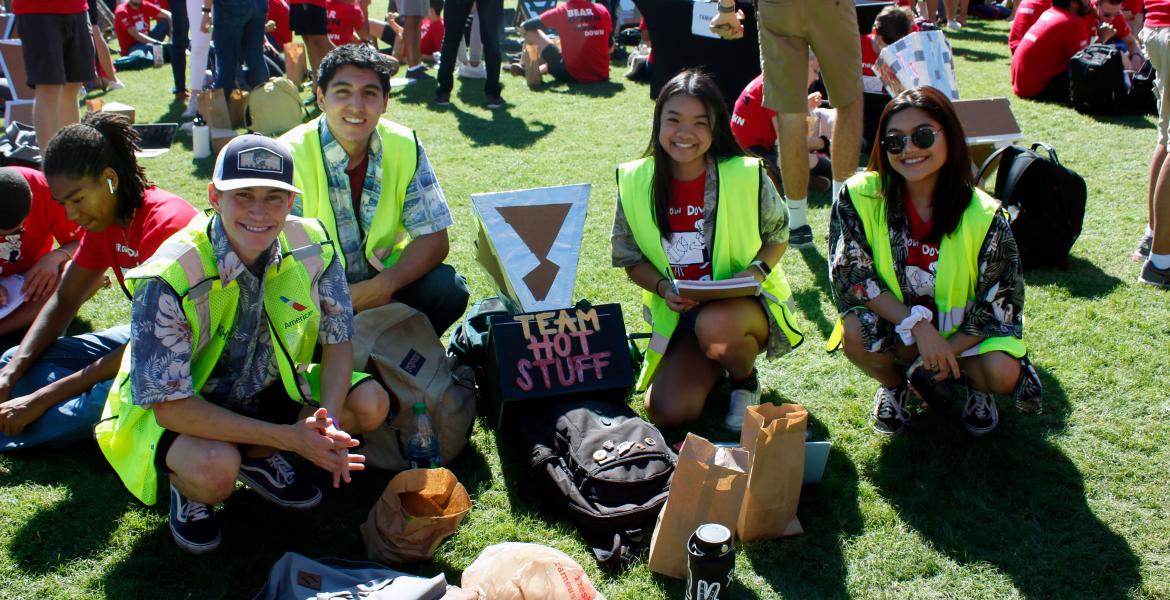 By
Emily Dieckman
Time to read
3 minutes
Print
a- a+
Read so far
Freshman engineers harness the power of the sun in their first hands-on design experience as UA students.

While many Tucsonans were enjoying cool temperatures and cloud coverage the morning of Friday, Oct. 18, more than 500 University of Arizona engineering students were hoping to see some sun.

It was the day of the 2019 Solar Oven Throw Down, the flagship event of ENGR 102, the College of Engineering’s required introductory course -- and the students’ first hands-on design experience as part of the Craig M. Berge Engineering Design Program. Freshman engineers spent their first eight weeks as college students designing, building, testing and rebuilding solar ovens out of everyday materials like cardboard and duct tape. At the Throw Down, they brought their ovens out into the sun on the UA Mall to cook biscuit dough.

“Although it seems simple, it’s actually much more involved than one would think,” said Ken George, ENGR 102 coordinator and lead instructor. “The project includes a variety of processes engineers will use in their future careers, including modeling, prototyping and designing.”

The ovens in assistant teaching professor Justine Schluntz’s class came closest, on average, to matching the temperatures the students had predicted through modeling, and they were named the winning section. Event sponsor W. L. Gore & Associates also gave an award for the group that demonstrated the best teamwork. Team SNACCS, from professor of practice Cac Dao’s class, was the winner, and Team FLAREON, from George’s class, was runner-up.

Teams tried out prototypes of their devices a few weeks before the event, and many changed their designs accordingly, adjusting the size or shape of their ovens to make them hotter or to make the peak temperature more predictable.

“The more insulation you have, the higher the predicted temperature is,” said Dallan Graybill of Team Los Jefes, whose oven was about twice the size of most of the ovens on the field. “We had one prototype that we tested, and it went okay. It was smaller, and if our first one was so small, we were going to make this one massive.”

While they learned technical skills like how to use Microsoft Excel, the team agreed that some of the most important lessons they learned through working on the project were time management, communication and teamwork.

Sophia Ippolito, of the team Easy Bakers, said her group switched to an octagonal oven design after the class went through a mechanical dissection of their devices. Seeing what was working, and what wasn’t, allowed them to make the changes that helped their oven perform well on the day of the event.

“My favorite part was getting to dissect another group and get feedback from other teams, because our prototype did so poorly, so to be able to identify the problem and fix it was rewarding,” she said.

Team Hot Stuff was decked out in Hawaiian shirts and bright yellow reflective vests, figuring it couldn’t hurt to wear clothing that might attract the sun to the area around their solar oven.

“Coming up with the whole basis of the oven was my favorite part, because we were pretty much clueless at the beginning and didn’t know what we were doing at all, and came up with this end product,” said team member Kathryn Hoang.

Many teams also dealt with last-minute challenges, such as the heat of the sun melting the tape that held their oven together. Team Tunder had to do an emergency repair when the wind hit their solar oven too hard, but they considered it just another part of the learning experience.

“I’d never done any engineering classes in high school, or anything where you’re working in a team or doing hands-on work, but I really enjoyed it,” said team member Summer Blunk. “Moving from prototyping into final modeling is so good. Going from our prototype, which barely hit 99 degrees, to this one, going to 120 degrees in three minutes, was so cool.”

Future Wildcats Get In on the Action

This was the first year that students from Tucson’s Salpointe Catholic High School, who were taking ENGR 102 during their senior year, participated in the Solar Oven Throw Down. One group was awestruck at just how hot their oven got, as they watched the temperature climb to 212 degrees Fahrenheit. Cecilia Gossler, STEM director and engineering instructor at Salpointe, said the experience was such a success for students that they plan to come back next year.

“It gives them an idea of what engineering is, and that’s really important,” she said. “It also helps them decide before they choose engineering if this is something they’re going to enjoy. Most of my students end up choosing careers in engineering.”