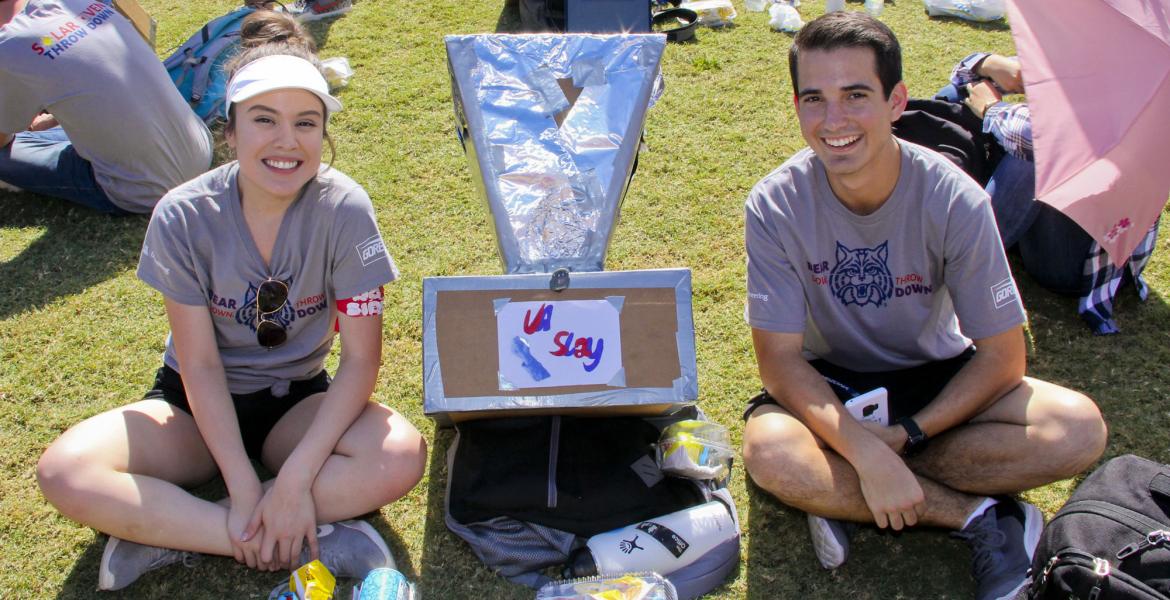 Members of team UA Slay and Engineering freshmen Carolina Gomez, left, and Eric Lawson enjoy the Tucson sunshine as they focus its rays in their solar oven.
Home / Stories / Engineering Freshmen Bear Down at the Solar Oven Throw Down

Engineering Freshmen Bear Down at the Solar Oven Throw Down

By
Emily Dieckman
Time to read
3 minutes
Print
a- a+
Read so far
Future engineers and biscuit dough were both on the rise at this annual College of Engineering event.

The event was the culmination of ENGR 102, the College of Engineering’s required introductory engineering course, in which students modeled, built, tested and rebuilt solar ovens out of common materials like cardboard, aluminum, duct tape, newspaper and polyester film.

“It’s a simple project that shows students the importance of manufacturing, mathematics, thermodynamics and prototyping,” said Jeff Goldberg, interim senior vice president for academic affairs and provost of the University of Arizona and former dean of the College of Engineering. “It’s always fun to get outside of the class and get some hands-on experience.”

Temperature and Competition Heat Up

The main goal of the event wasn’t just to bake biscuits -- although many biscuits were baked, and the distinctive scent of burning bread pervaded areas of the Mall. The students spent their first six weeks of college developing thermodynamic models to predict the highest temperatures their ovens would reach under the Arizona sun. The teams from instructor Ken George’s class designed the ovens that most closely achieved predicted temperatures.

Because the success of the ovens was dependent on the sun’s power, the weather -- a mostly cloudless day with temperatures in the 70s and 80s -- was perfect for the event. The student teams, with names ranging from The Ovengers to The Dough Boys, gathered in clusters around their solar ovens and recorded the temperature rise within the ovens’ chambers.

Akrum Tamimi, an ENGR 102 instructor, said he watched the students in his class become more and more invested in their projects as the weeks went on, especially after they first time they tested their prototypes.

“Prototyping is very important, because you learn something every time you test, and you improve,” Tamimi said. “That’s what engineers do.”

Nearly 600 UA Engineering students compete in a mass cook-off as they test and demonstrate the low-cost solar ovens they designed and built from scratch. Freshmen showcase their creativity and math prowess in a bid to calculate the expected temperatures of their thermodynamic designs. Faculty and industry judges select winners and award prizes. The event is sponsored by W.L. Gore & Associates.

What started as an obligatory assignment became a spirited competition after the students had a chance to see how their classmates were performing,

Perhaps nowhere was this more evident than when Larry Head, interim dean of the College of Engineering, stopped to chat with some students, and they protested that he needed to get out of the way -- he was blocking their oven from its celestial power source.

Big Ones, Small Ones, Some as Big as Your Head

The increased sense of competition bred creativity among the students. While most of the ovens had the same general shape, they came in many different sizes and relative dimensions.

Team Photon Fury had one of the biggest ovens on the field, and team member Thelma Gonzalez explained that the team’s idea was simple: A bigger reflector meant capturing more sun, and a bigger reflector also meant scaling up the rest of the oven. Fellow team member Ben Hoyt said watching their project go from a half-formed idea to a fully baked biscuit was exciting.

“My favorite part has definitely been executing everything we worked on, from the prototype through the actual throw down,” he said.

One team’s oven rested atop a small tripod while a few teams had reflectors with eight sides instead of four. Other teams talked about experimenting with the amount of newspaper they stuffed in their chamber to provide insulation.

“I love this class because it’s hands-on,” Gonzalez said. “This is the first time I’ve ever done any engineering -- building things, using mathematical models and learning Excel.”

Team Half Baked’s oven was decorated with the label of a well-known ice cream brand, and the team members enjoyed their own pints of ice cream in between pausing to record oven temperatures. Team member Davis Payton said he’d heard about the Solar Oven Throw Down before enrolling as a UA student.

“I knew about this going into the College of Engineering, and I thought it was pretty sweet,” he said, gesturing toward his team’s oven. “I want to get some steaks going in there.”

The Solar Chicks, a team in the class supervised by Cac Dao, professor of practice in the Department of Civil and Architectural Engineering and Mechanics, won the All-in-the-Same-Boat Award, sponsored by international technology company W.L. Gore & Associates, for their demonstration of strong teamwork.

“When asked what symbol represented their team, they responded with ‘a hand,’ stating they all worked together and were all critical to accomplishing the end goal, not being able to function as well without one of the digits,” said Gore engineer and UA industrial engineering alumna Rae Gargione. “They acknowledged the necessity to relinquish individual wants or needs for the greater good of the team.”

The Roasties, a team in the class of Armin Sorooshian, professor of chemical and environmental engineering, was runner-up for the award.