Jennifer Ramin, a sophomore in the UA chemical and environmental engineering department, was awarded a Goldwater Scholarship in March 2012. 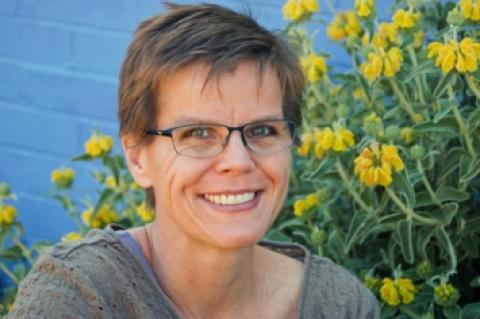 The United States Congress established the Barry M. Goldwater Scholarship and Excellence in Education Program in 1986, in honor of former United States Senator and 1964 presidential candidate Barry Goldwater, a Republican from Arizona.

The goal of the program is to provide a pipeline of highly qualified engineers, scientists and mathematicians by awarding scholarships to college students who intend to pursue careers in these fields.

Competition for Goldwater scholarships is famously intense. This year, the program's trustees awarded just 282 scholarships, which they selected based on academic merit from 1,123 nominations.

Ramin  is a returning student who left a successful 15-year career as a nurse to take up engineering. "I am thrilled to have been chosen for the Goldwater Scholar program," Ramin said. "It makes me feel like I have chosen the right path to pursue chemical and environmental engineering. I left a career as a nurse practitioner to follow my heart."

Because she's a sophomore, Ramin will receive the $7,500 annual award for 2 years. "It will go a long way in helping me pay for tuition and living expenses," she said.

One of Ramin's teachers, University Distinguished Professor Paul Blowers, said that in his 12 years as an engineering faculty member he'd never actually worked with a Goldwater scholar because the award is so exceptionally competitive.

"We've had four students make it fairly deep into the process, but only one honorable mention," Blowers said. "And those students went on to graduate school at Cal Tech, Berkeley, and UT Austin, all in the top 10 for chemical engineering."

Ramin said her educational goal is to complete a PhD program in chemical engineering, focusing on sustainable energy, particularly on alternatives to fossil fuels. "I would love to work in a research lab like the National Renewable Energy Lab in Colorado," she said.

Blowers further described Ramin as an "outstanding nontraditional student," and added: "We are lucky to have her in our program." Despite already having earned bachelor's and master's degrees, Blowers said, Ramin decided to work on environmental issues and to use chemical engineering to get there. "Even with her degree in mathematics and the ability use prior coursework for our degree," Blowers said, "Jennifer decided to retake all of the courses and update her knowledge."

Ramin got her bachelor's degree in mathematics at the University of Texas at Austin in 1988, and in 1995 earned her master's in nursing at Boston's Massachusetts General Hospital Institute of Health Professions. She is a member of the UA student chapters of Engineers Without Borders and the Society of Women Engineers.

The Goldwater Foundation is a federally endowed agency established by law in 1986. Since its first award in 1989, the foundation has bestowed more than 6,600 scholarships worth approximately $50 million.

Jennifer Ramin, a sophomore in the UA chemical and environmental engineering department, has been awarded a $6,500 Career Development Grant by the American Association of University Women, or AAUW.

AAUW awards Career Development Grants to women who hold a bachelor's degree and are preparing to advance or change careers or re-enter the work force. Special consideration is given to women of color, and women pursuing their first advanced degree or credentials in nontraditional fields.