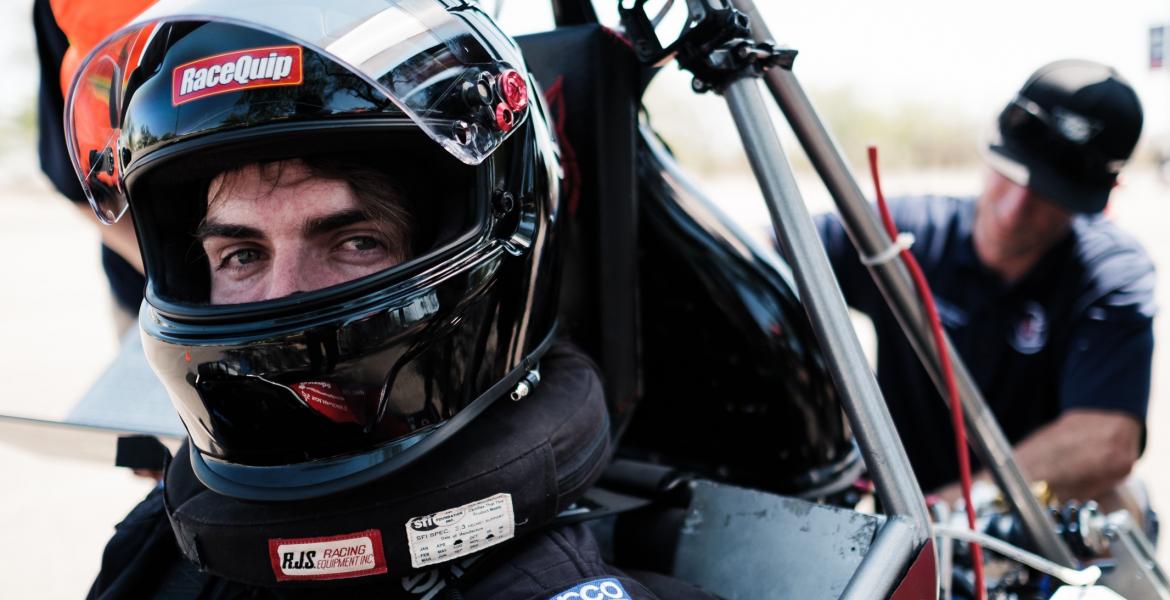 By
Emily Dieckman
Time to read
3 minutes
Print
a- a+
Read so far
From racecars to prosthetics and air quality sensors, students roll up their sleeves and get the job done.

Many students take their engineering knowledge to the next level in one of the college’s dozens of student clubs. The college is home to several honors societies, professional groups and themed organizations.

“Baja really gives you something to stand out if you plan on going into industry,” said Erik Knowles, a recent mechanical engineering graduate and 2019-2020 club president. “I had a Caterpillar internship at the proving ground two summers ago, and I would not have gotten that internship without Baja.”

Knowles, who begins a full-time co-op at Caterpillar this summer, said club members are in demand at the company because their skillsets stand out. Likewise, Emily Bauer, a 2021 mechanical engineering graduate who led a senior team designing the car, said the combination of unifying subteams into a whole team and turning physical parts into an entire vehicle helps prepare students for employment.

Micah Seiglaff, 2020-2021 president and rising senior in mechanical engineering, agreed that there’s nothing like doing engineering.

“You learn a lot of theory and math in classes, but it’s not until you pull up SolidWorks and start running a part, and running simulations, and figuring out how you’re going to put something together that you really see the whole picture,” he said.

Medical Devices Round Out Academics

In the UA Medical Device Club, students have worked on projects ranging from a prosthetic leg for a faculty member’s dog to a minimally invasive hemodialysis catheter prototype. To introduce new members to prototyping and programming, the club also works on smaller projects, such as air quality sensors and contactless temperature sensors.

“The greatest thing that the Medical Device Club has to offer is freedom to work on a wide range of projects at any skill level while networking with likeminded students and making new friends,” said club president Jacob Baker. “It has helped me fill in the gaps that my degree simply doesn't have time to cover in a comprehensive way.”

When COVID-19 made it difficult to do hands-on work, the group shifted to brainstorming ideas for future projects. Meetings also became a space where members checked in on one other and provided support.

“My communication skills have grown, and that’s made me more effective at connecting with students, professors and others,” said Alexandra Janowski, a biomedical engineering PhD student and the club’s technology coordinator.

The electrical and computer engineering major, who led the electrical/software subteam in the 2020-2021 academic year, is surprised by how much he’s learned about project management. With most club members balancing full-time academic schedules and part-time jobs, just setting starting and end points isn’t enough, he said.

“When you can only get people together for a couple of hours every week, you need to break down the project into a bunch of smaller, achievable goals so a large project becomes less overwhelming,” he said.

Over the last year and a half, the team focused mostly on tasks that could be done virtually, such as laying out wiring diagrams and learning about software architecture. They also recorded meetings so participants in different time zones could participate asynchronously.

“I find that what gets brought up the most on my resume outside of work experience is the club,” Penny said. “Most questions surrounding it involve being able to effectively communicate on an interdisciplinary team.”

Like Baja, Wildcat Formula Racing is a design-build-compete group. Club members spend the first half of the year designing a formula-style car and the second half testing and machining the vehicle to prepare for the Formula Society of Automotive Engineers competition.

For Carlton Louie, a rising junior in aerospace engineering and the club’s marketing lead, the chance to join Formula was one reason he chose the University of Arizona.

The coolest thing about Formula, said Louie, is learning about every facet of the engineering process, from fundraising to teamwork to welding – even if a lot of the group’s activities were in the virtual realm during the pandemic.

“We had to bring in our money. We had to coordinate with large groups of people. And you learn a lot of interpersonal skills that you don’t get in the classroom. I think it emulates working in a real engineering environment the best out of all the experiences I’ve had.”

He’s not the only one who thinks his experience has left him well prepared. This summer, Louie is interning at Lawrence Livermore National Lab, using the computational fluid dynamics skills he developed in Formula.