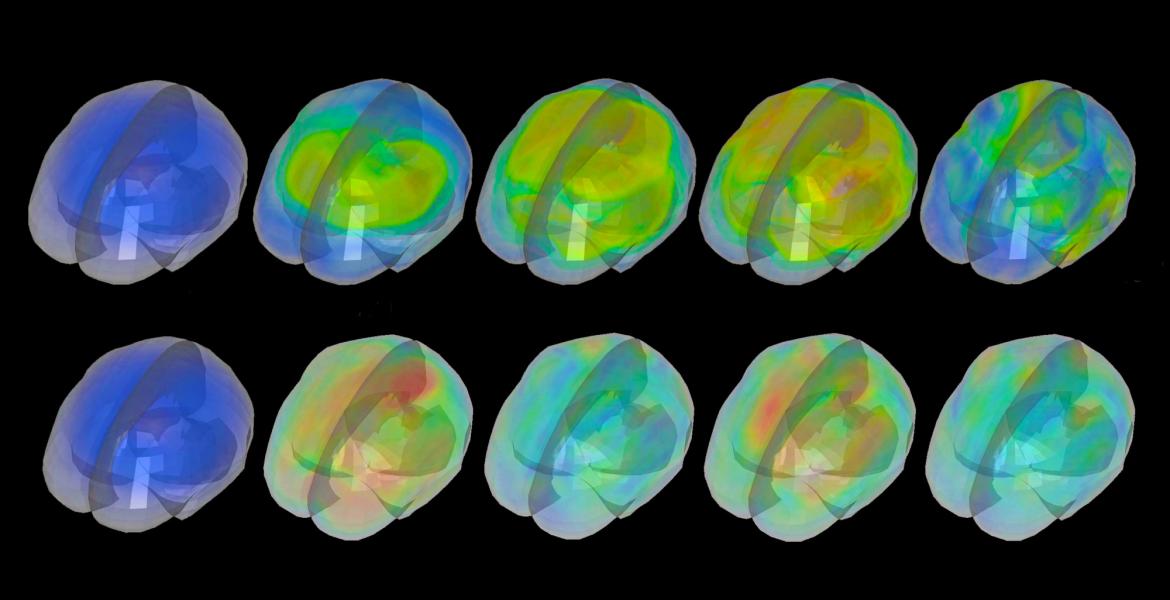 By
Emily Dieckman
Time to read
2 minutes
Print
a- a+
Read so far
New research results indicate that traumatic brain injury, such as that resulting from impacts in sports and auto accidents, is caused by stretching and straining of tissue well below the surface of the brain.

Kaveh Laksari, assistant professor of biomedical engineering at the University of Arizona, is first author on the paper “Mechanistic insights into human brain impact dynamics through modal analysis,” recently published in the journal Physical Review Letters. The paper demonstrates that some of the most dangerous brain injuries today don’t come from hitting your head on a hard surface. In fact, sometimes they come from not hitting your head on anything.

There are two primary types of head injuries. In focal injuries, a particular part of the brain sustains a direct impact. Think someone hitting their head on the steering wheel in a car crash, leading to potential bruising or bleeding of the brain. Focal brain injuries, especially in sports, have decreased dramatically with the development of increasingly sophisticated helmets since the 1960s. Now, however, doctors and scientists are seeing an increase in diffuse injuries, in which smaller-scale damage is spread throughout different areas of the brain.

Laksari has been researching traumatic brain injury since 2007. During his time as a postdoctoral scholar at Stanford University, he and a team of scientists developed a mouthpiece that could measure and record kinematics, or how fast the brain is moving in space. When an athlete’s head experiences a rapid movement, a microprocessor in the mouthpiece triggers data-collecting sensors.

This method improved researchers’ ability to gather information about brain and skull impacts because it was measuring movement of the teeth, which are rigidly coupled to the skull, rather than a helmet, which is designed to move independently of the skull. Using these mouthpiece microprocessors, the researchers collected 537 head impact kinematics across 31 athletes, two of whom experienced concussions and one of whom lost consciousness.

“Now, we have this big data set of sports head collisions, and we used a computer model to simulate all this data and the subsequent motion and deformation of the brain inside the skull,” Laksari said.

The computer system is called a finite element model, and researchers input the data they gathered about the head kinematics to virtually recreate these impacts.

“There is an external input to the head as a system -- in this case an impact -- and then you have an output in the form of brain deformation or even injury,” Laksari said. “As engineers, we wanted to characterize the behavior of that system. Why do certain inputs lead to certain outcomes such as injury?”

When the brain undergoes an impact, its movements can be categorized into sections called modes. This study demonstrated that the first mode involves the biggest movements and the most energy expenditure. In one example, the brain was displaced up to 3 millimeters, moving at 28 Hz, or 28 oscillations per second in the first mode. By the third mode, the brain was oscillating in smaller, quicker movements, at 42 Hz and only one millimeter of displacement. Modes aren’t just temporal, though: Different regions of the brain can experience different modes at the same time.

When modal frequencies are mismatched, or when one part of the brain moves faster or more slowly than another part, stretching or straining between the brain’s regions can occur and cause injury. Laksari and his colleagues found that there are more instances of this this straining phenomenon in the inner regions of the brain, especially in areas surrounding the brain’s ventricles, where cerebrospinal fluid -- a substance that provides immunological protection and clears waste from the brain -- is produced.

“Before, popular thinking tended to be that the outside of the brain was the biggest area of concern because it could sustain impacts against the skull,” Laksari said. “We found that this mismatch is bigger in the deeper regions of the brain, and we were able to see a good correlation between our simulations and the pathological data from diagnosed injuries.”

“Concussion is dubbed a silent epidemic as it affects millions of people,” Laksari said. “Our goal was to understand the underlying mechanism of the brain deformation during an impact. That will enable us to provide better diagnosis and prevention in the future."