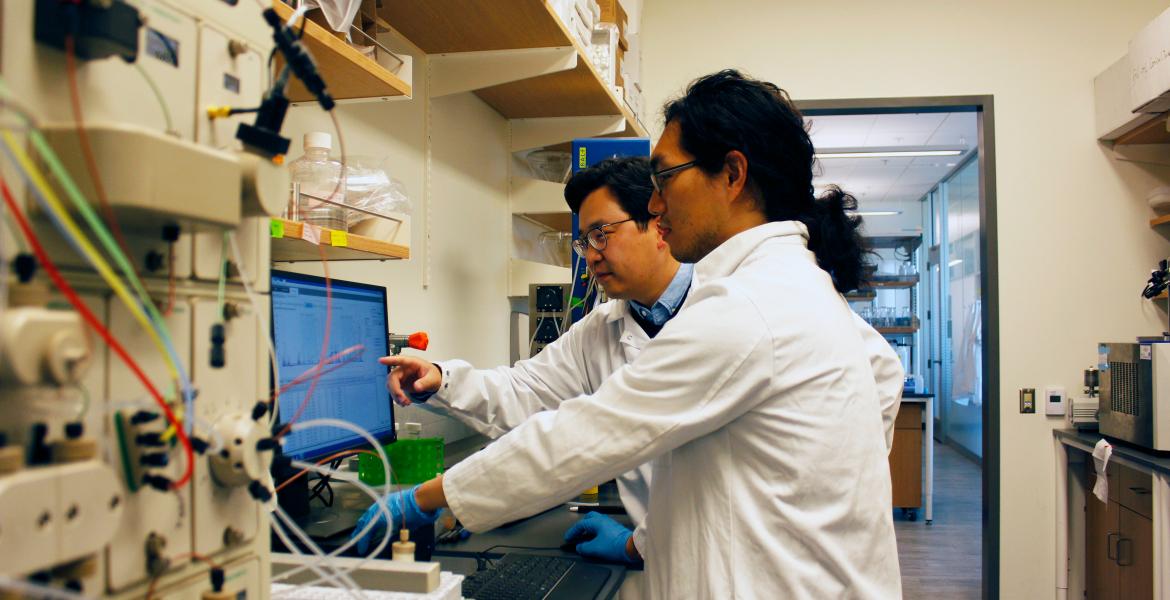 By
Melina Walling
Time to read
4 minutes
Print
a- a+
Read so far
The Arizona Republic features three College of Engineering faculty members in an article about biomimicry and biomimetic research.

Zoom in to the inner world of your veins, arteries and capillaries, and you'll find an engineering marvel: the red blood cell. Disc-shaped and flexible, millions of these oxygen transporters can be found in just a single drop of blood, and they’re adapted extremely well for their job of keeping you alive.

Now zoom out, cross the globe and witness another design feat: the termite mound. Relative to the size of its inhabitants, the structures are like skyscrapers and form the ideal habitat for an entire colony of insects.

The blood cells and termite mounds might seem completely different, but they have one thing in common: They’re inspiring Arizona scientists to develop new technologies.

The technology falls under the umbrella of “biomimicry,” a practice that, at its core, lets scientists and researchers imitate and learn from from features found in nature. In one famous example, engineers in Japan modeled the front of their high-speed bullet train after the shape of a kingfisher's beak to make the design more streamlined and eliminate the sonic boom.

If imitation is the sincerest form of flattery, Minkyu Kim could be red blood cells’ greatest admirer. He wants to mimic them in a lab by making his own versions that can be used to deliver medications like cancer drugs directly to specific parts of the body.

Kim, an assistant professor of biomedical engineering and of materials science and engineering at the University of Arizona, recently received a $600,000 award from the National Science Foundation to make his vision a reality. Over the next few years, he will use techniques from synthetic biology and engineering to develop the technology that he says may one day improve doctors’ ability to provide targeted treatments and deliver drugs more effectively.

He says the idea stemmed from his curiosity about the red blood cells themselves.

“That was the starting point in this study, to learn more about this cell, and then (we) came up with the idea to develop biomimetic red blood cell microparticles,” Kim said.

Kim has good reasons for wanting to create imitation red blood cells for drug delivery. They can slip past the body’s filtration system (unlike many drugs delivered using conventional methods). They’re great at carrying oxygen, so all scientists need for drug delivery purposes is to replace that oxygen with the medication of choice.

“They are flexible and they have very special geometry, and then they can be stretchable if there are external forces, and they are reversible if those external forces were removed,” Kim said. “I'm just trying to mimic (what) the red blood cell looks like.”

Focusing on the experiences of patients and physicians is key to Philipp Gutruf’s approach, too. Gutruf, another assistant professor at the UA, is working with his team to develop a tiny chip that attaches directly to the surface of a bone. The device could be used after traumatic injuries or for patients with osteoporosis, collecting data to keep tabs on the healing of fractures and other elements of bone health. The device is as thin as a sheet of paper, does not need a battery and is made to work seamlessly with the body.

Gutruf considers his device “biosymbiotic,” not “biomimetic” (his goal is to integrate smoothly with the human body rather than imitate it). But he is still borrowing some of the body’s principles with the aim of creating a better biotech experience, a goal that shares many commonalities with biomimicry.

And seamless integration is a challenge because the body — including the surface of bone — is constantly regenerating, making it hard for any foreign objects to stick or stay put. Think of skin growing around a splinter.

Gutruf and his team addressed that challenge by attaching calcium particles to their chip, merging techniques of engineering and biology. The body perceives those calcium particles as part of the bone itself, eventually creating a permanent bond with the device.

That’s an approach that differs from many other medical devices ranging from pacemakers to Fitbits, which Gutruf says are often just iterations of a “box” that takes measurements or carries out a certain function with little regard for the context in which it will be used. He wants to move away from that, and toward devices that are more like us.

“It is much more natural to interact with these devices, because we are not a box. We are a soft, squishy thing that moves around this world,” he said.

Jekan Thanga, an associate professor of aerospace and mechanical engineering at the UA, takes inspiration from insects, particularly “eusocial,” or highly organized social species like ants, termites and bees. And he’s using that biomimicry to create teams of robots that may one day help us explore outer space.

Biology is full of “principles that we consider sort of superior to our own engineering methods,” he said.

Which brings us back to the termite mounds. Certain termites build structures known as “cathedral mounds,” Thanga said, some of which can be far taller than the average human. They also form a complex ventilation system, channeling airflow to create a perfectly cool and moist inner environment. And, to top it off, that cozy abode shelters a self-sustaining food system: The fungi that grow inside the termite mounds provide services for the colony that lives within.

But perhaps even more impressive than the termites’ construction know-how, or their agricultural acumen, is their ability to work together. Thanga said the termites have solved a problem that robot engineers are just starting on. Programming a single robot is one thing. Getting five, 10 or more to cooperate is another story.

“We realized very quickly that our current theory, particularly with multiple robot systems, is quite limited, that it falls flat very quickly,” he said. “And so we look towards these insects for how they're organized.”

One day, Thanga hopes that teams of robots could be deployed to mine for natural resources on asteroids or the surface of the moon. And... Thanga sees his research and methods as a response to the pressures of the modern world, including climate change and resource limitations. But instead of focusing on Earth, he thinks humans should push to become an interplanetary species.

“All of these factors (threats like climate change and resource limitation), I think, forces us to want to think about a second place outside of Earth apart from just curiosity about what's out there,” he said.