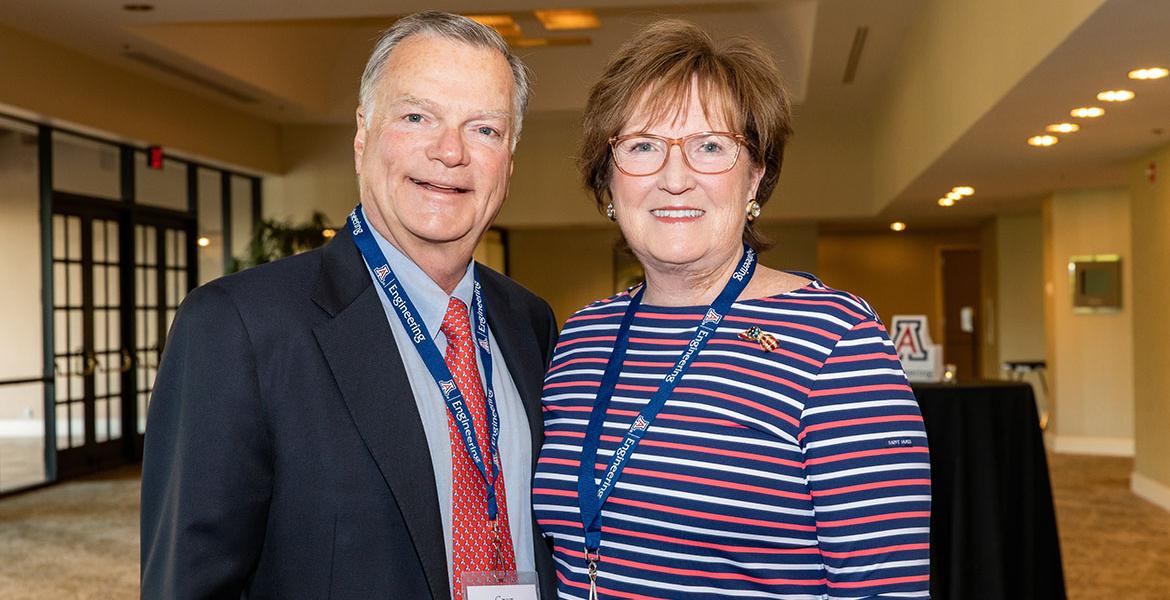 By
Emily Dieckman
Time to read
4 minutes
Print
a- a+
Read so far
Endowed chairs help the university attract and retain faculty members who have achieved national or international distinction in their fields.

Greg Boyce was accepted to two universities after he finished high school. But a springtime visit to Tucson made it an easy choice: He was going to study engineering at the University of Arizona.

"Obviously, I've never regretted making that decision," said Greg Boyce, who earned his bachelor's degree in mining engineering in 1976 and went on to a successful 40-year career in the global energy and mining industry. Among his achievements was leading companies including Rio Tinto Energy and Peabody Energy; he retired from the latter as executive chairman in 2015. Additionally, he served on the boards of directors for Monsanto and Marathon Oil and currently serves on the boards of Newmont Mining and the Heard Museum. His wife, Lisa, a 1978 business administration alumna he met at UArizona, has been by his side throughout.

With a $1.5 million gift to UArizona, and a plan to give an additional $1 million, the couple will establish the Gregory H. And Lisa S. Boyce Endowed Department Leadership Chair in Mining and Geological Engineering. Endowed chairs help the university attract and retain faculty members who have achieved national or international distinction in their fields. Kray Luxbacher, former head of the Department of Mining and Minerals at Virginia Tech, joined the university in August 2022 as inaugural holder of the chair.

"Expanding and strengthening our mining and geological engineering program has been one of my top priorities since I joined the college in 2019, and I am thrilled that Greg and Lisa have decided to make such a generous contribution to that mission," said David W. Hahn, the Craig M. Berge Dean of the College of Engineering. "Greg's long and impactful career is a perfect testament to the value of a mining engineering education. We are proud to name this leadership chair after two such successful University of Arizona alumni."

Greg Boyce, a member of the American Mining Hall of Fame, has been a longtime supporter of UArizona, serving as chairman of the board of the Lowell Institute for Mineral Resources and being named the 2013 College of Engineering Alumnus of the Year. He said he felt the time was right to make a gift because of the establishment of the university's School of Mining and Mineral Resources in 2021.

Co-administered by the College of Engineering and the College of Science, the school brings together students, professionals and communities from a range of disciplines to tackle industry challenges, with a particular focus on sustainability.

"The College of Science houses strengths in mineral resources and Earth surface processes that are intertwined with the strengths of the mining and geological engineering program in the College of Engineering," said Carmala Garzione, dean of the College of Science. "This generous gift from the Boyce family will ensure that the Engineering and Science college partnership in administering the School of Mining and Mineral Resources is reinforced by strong leadership in mining and geological engineering that will put us on the cutting edge of advancing sustainable and environmentally sound mining practices."

Greg Boyce was impressed with what he sees as an unmatched alignment of support for the initiative, with backing from the deans of both colleges, University of Arizona President Robert C. Robbins and even the Arizona State Legislature, which provided $4 million in ongoing yearly funding for the school in fall 2021.

"Because the MGE department is so core to the mission of the new School of Mining and Mineral Resources, I felt we needed to ensure the longevity of strong leadership in that position," Greg Boyce said. "I believe the university's vision of the mining programs and the collaborative programs around mineral resources will become the best in the world."

The gift comes at a perfect time. The Lundin family, of the Lundin Group, a collective of public companies in the resource sector, donated $2 million to lay groundwork for the school in 2020. The family also offered a $2.5 million match for funds raised by December 2022. With their gift, Greg and Lisa Boyce are not only establishing the endowed chair, but having double the impact by meeting the match.

"With Greg and Lisa's commitment, we have not only established the premier leadership chair in mining and geological engineering, but also met the ambitious match set by the Lundin family," said John-Paul Roczniak, president and CEO of the University of Arizona Foundation. "This is a meaningful example of alumni leaders in industry working together to move the university forward. When alumni give to programs that made a difference in their own lives, it sets the stage for all Wildcats to compete with the best."

The Right Place at the Right Time

Greg Boyce has watched the industry evolve significantly in the last 40 years, and not just in terms of technology. Many stakeholders have also taken a more holistic view of the mining process and its impact on the environment and local communities. He believes the industry needs graduates with a wide breadth of training. So, he is enthusiastic about the school's interdisciplinary approach to education, which will tap into fields including engineering, science, environmental studies, business, social science, public health and law.

﻿﻿"We are thankful to the Boyce family not just for their outstanding generosity, but for their recognition of what a key role the University of Arizona plays in the mining and mineral resources sector," said University of Arizona President Robbins. "In addition to being home to the new school, we are also ranked fourth in the U.S. in mineral and mining engineering programs in the 2022 QS World University Rankings. And the U.S. News & World Report Best Graduate Schools ranking placed our geosciences program as second in the nation among geology graduate programs."

After marrying Lisa shortly after graduation, Greg Boyce began his career in the Copper State. Today, Arizona produces three-quarters of the nation's copper and is the sixth-largest copper producer in the world. With headquarters for major mining companies based in Arizona – including Freeport-McMoRan and Hexagon Mining – nearly 50,000 jobs in the state are connected to mining in some way.