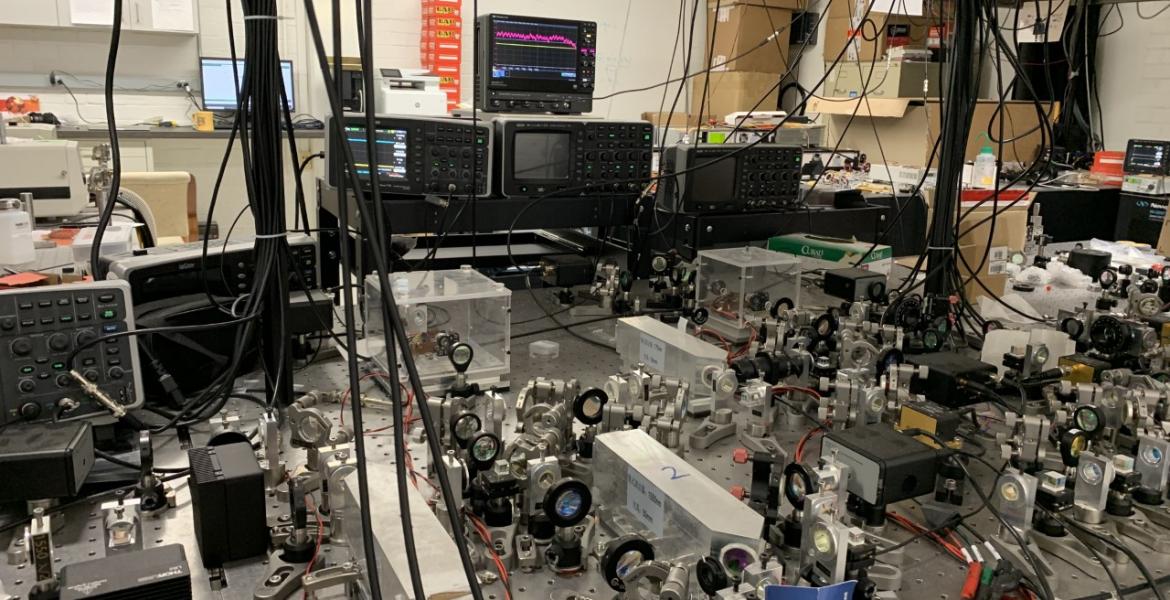 By
Emily Dieckman
Time to read
3 minutes
Print
a- a+
Read so far
University of Arizona researcher Zheshen Zhang leads a team to create sensor systems for navigation, health care and communications – on Earth and beyond.

Vehicle navigation systems, space communications and health care imaging are all powered by sensors which constantly send and receive information. Quantum entanglement – specifically, of photons – could make these systems vastly more powerful by increasing their sensitivity, accuracy and stability.

A University of Arizona team led by Zheshen Zhang, assistant professor of materials science and engineering and optical sciences, has received a $1 million Convergence Accelerator phase one grant from the National Science Foundation to move his basic quantum research into practice. C-Accel is new program that brings research teams together to address national-scale societal challenges. Zhang’s project team is one of 29 in the program’s second cohort.

“We are excited for these teams to use convergence research and innovation-centric fundamentals to accelerate solutions that have a positive societal impact,” said Douglas Maughan, head of C-Accel.

In June 2021, at the end of phase one, the team will participate in a pitch competition and a proposal evaluation. Selected teams will proceed to phase two, with potential funding up to $5 million for 24 months.

The research team is creating a prototype of a network of sensors connected via quantum entanglement, laying the groundwork for academia, industry and public agencies to use entanglement-powered technologies.

NSF C-Accel and UArizona College of Engineering alumnus. “If successful, the research from this project could lead to quantum chips that can have an impact on technologies ranging from autonomous vehicles to secure navigation and imaging capabilities.”

Quantum entanglement involves linking two particles in such a way that whatever happens to one particle influences the other. The phenomenon is powerful for many reasons, including that it allows for simultaneous sharing of information. However, entangled atoms are extremely fragile: Even a slight environmental disturbance can break the entanglement. Working in the optical domain by entangling photons, or light particles, instead of atoms, makes for a stronger bond.

“Atoms interact with the environment all the time – like, a pen is made of atoms, so if I pick that up, I’m interacting with it physically,” Zhang said. “In comparison, entanglement carried by photons is quite robust, because photons typically do not interact with the environment in the same way – I can’t pick up a ray of light. But you can see sunlight shining on objects all around you.”

In previous entanglement work, Zhang and his collaborators demonstrated how different kinds of signals can be converted to the optical domain, so they can entangle photons instead of atoms. This allows them to work with the information in more versatile and complex ways. It’s a bit like rewriting the information from a more obscure language, like Latin, into a widely used language, like English. It’s the same information, but converting it to a different language means more people can understand and make changes to it, so the information becomes more impactful.

For example, GPS signal is stored in radiofrequency waves. In one experiment, the researchers converted the information to being stored in photons, allowing for more stable entanglement and improved functioning of navigation systems.

The Sky’s the Limit

Because so much of our world is powered by sensor technology, potential uses for entangled networks are broad.

One way Zhang’s team plans to use the NSF grant is for development of affordable, compact optomechanical sensors. For instance, GPS is today’s gold standard for vehicle navigation, but the technology is dependent on a moving vehicle receiving signals from an external satellite. This means there is a risk that signals could be spoofed, or that hackers could emulate a signal and take the car to any place they want. With optomechanical techniques, a vehicle could use an on-board device to determine its own location, improving precision and safety.

“The idea is to attach a pendulum to the vehicle, which displaces in the direction opposite the vehicle’s acceleration – similar to a weathervane, but with inertia instead of wind,” said Dal Wilson, a collaborator in the James C. Wyant College of Optical Sciences. “Normally, you’d want a large pendulum to produce a measurable displacement, but by using light to read the displacement very precisely, we can miniaturize the pendulum to the size of a coin.”

Similar methods could be used in space missions and other situations where GPS signals aren’t available. Other applications for the technology include atomic force microscopy, wherein a tiny probe moves along the surface of a material to create a detailed, 3D scan. It has applications that include health care, materials science and physics.

Atomic force microscopy captures images in extreme detail – with resolution on the order of fractions of a nanometer. A human hair is about 75,000 nanometers in diameter, and fingernails grow about 1 nanometer per second. However, nanoscale imaging with a single point probe is time consuming. Applying entangled light sources could mean using multiple probes that sharing information instantaneously, speeding up the process and boosting sensitivity.

“Using entangled light would allow them to improve their sensing performance by reducing measurement noise and offering higher sensitivity,” Zhang said. “Having multiple probes could also make the traditionally slow process much faster.”

"Tackling grand challenges like quantum entanglement effectively requires bringing together expertise from many fields, each with its own piece of the needed solution, and teams like this need support to jump-start their ideas," said University of Arizona President Robert C. Robbins. "This funding allows our researchers to develop innovative ideas, with potentially transformative results. I am looking forward to Dr. Zhang's progress."

Zhang’s UArizona project team also includes Linran Fan, Christos Gagatsos and Nasser Peyghambarian of optical sciences, as well as Quntao Zhuang of the Department of Electrical and Computer Engineering. External partners from government, academia and industry include Jon Pratt from the National Institute of Standards and Technology, Sunil Bhave at Purdue University, and William Clark from General Dynamics. General Dynamics has supported quantum research at the University of Arizona for a number of years.