By
Pete Brown
Time to read
2 minutes
Print
a- a+
Read so far
Baseball fan and award-winning systems and industrial engineer sees natural alignment between department research and UA strategy.

Professor Young-Jun Son is the new head of the department of systems and industrial engineering at the University of Arizona. 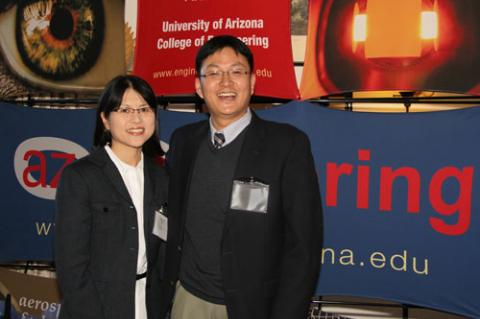 Young-Jun Son, right, stands with his wife, Hyewon Shin, at the 2012 da Vinci Circle annual dinner, at which he gave a talk in his capacity as a da Vinci fellow.

Son, who joined the faculty of the SIE department in 2000, began his new role Jan. 20. In addition to being a professor of systems and industrial engineering, Son is a da Vinci Fellow, an Arizona Engineering Faculty Fellow, and director of the UA’s Advanced Integration of Manufacturing Systems and Technologies program.

“I am truly excited by this opportunity to lead our systems and industrial engineering department, which has provided so much for me to develop and grow my research and education program over last 13 years,” Son said. “I am so glad to have a chance to give something back to SIE by serving SIE faculty, staff, students and alumni.”

Jeff Goldberg, dean of the UA College of Engineering, described Son as “one of the most respected faculty members in the College.” Goldberg noted that Son’s graduate students have won more than 10 national awards in thesis and modeling competitions. “We share a common vision of potential SIE contributions in the UA’s Never Settle strategic plan,” Goldberg said. “And we both believe that there are strong opportunities in the research application areas of defense, biomedical systems and devices, manufacturing, and sustainable systems.”

Son concurred with Goldberg’s assessment of how SIE research can contribute to the realization of the overall UA mission. “The SIE team brings critical skills to the areas emphasized in the UA Never Settle plan,” Son said. “I am excited to work with the SIE team, other departments and schools within the College of Engineering, as well as with other Colleges at UA, so that the SIE team becomes a strong contributor to the UA Never Settle mission.”

Son and his wife, Hyewon Shin, are both from Taegu, South Korea. They have been married since 2003 and have two children: Natalie, 8, and Anthony, 5. Son received his BS degree in industrial engineering with honors from Pohang University of Science and Technology in South Korea in 1996, and his MS and PhD degrees in industrial and manufacturing engineering from Penn State University in 1998 and 2000.

Son plays racquetball and is a big fan of baseball. “I was very disappointed when the Chicago White Sox and the Colorado Rockies moved out of Tucson for their spring training,” he said. “But I am excited again because two Korean professional baseball teams -- NC Dinos and KT Wiz -- now do their spring training in Tucson.”