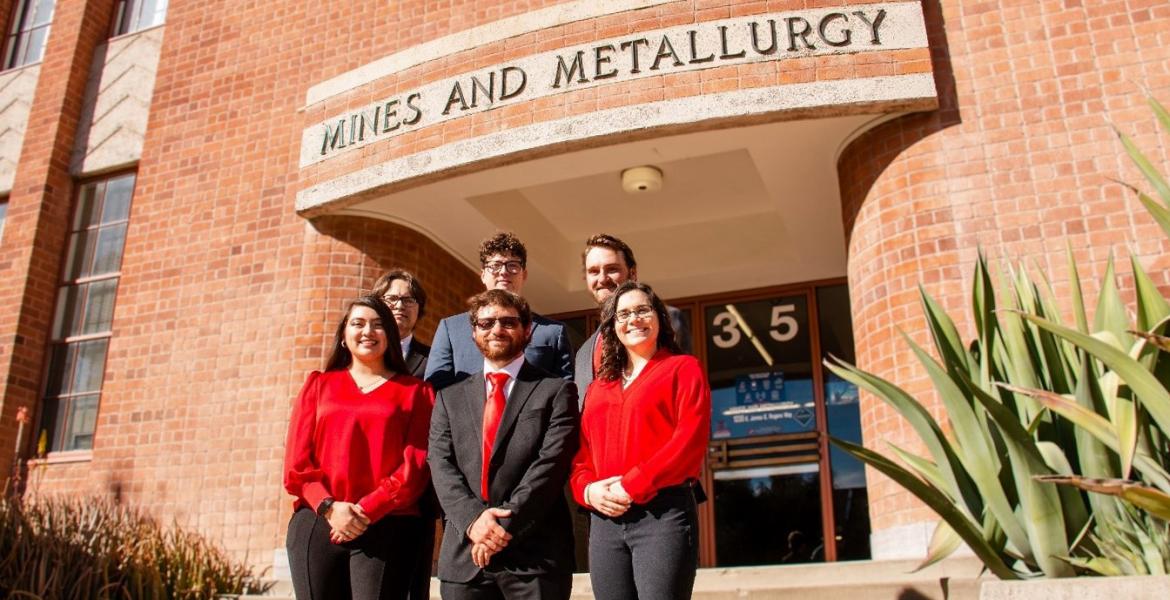 By
Lowell Institute for Mineral Resources
Time to read
2 minutes
Print
a- a+
Read so far
For the first time, a team of University of Arizona seniors took home first place in the international mine design competition. The junior team earned third place in another competition.

UArizona students went all out at this year’s Society for Mining, Metallurgy, and Exploration/National Sand, Stone and Gravel Association, or SME/NSSGA, student design competitions. The senior design team, Aggregate Mining Solutions, brought home the gold against international participants – a first for the university. The Wildcat Junior Team earned third place in the Metallic Student Design Competition, which ran for the first time this year.

“The University of Arizona’s mine design teams have been consistently ranking in the top three for the past several years. We have a tight-knit group of undergraduate students who are passionate about everything they do,” said Moe Momayez, Interim Department Head and David and Edith Lowell Chair in Mining and Geological Engineering at the University of Arizona. “The success of both the senior and junior mine design teams is also a reflection of the quality of our mining engineering program and the faculty in the department.”

Most of the students are majoring in mining and geological engineering, or MGE, but some, like Huggins-Hubbard, hail from other departments.

The challenges began in November and were concluded in the first week of March at the 2021 SME Annual Conference & Expo. Schuyler Mangiafico, leader of the junior team and a fourth-year student pursuing a bachelor’s in mining engineering, said that working remotely due to the pandemic made the first phase of the competition especially challenging. On top of that, the team of juniors had not yet taken all the core classes that would help them along the way. By phase two, though, they had found their groove.

“Phase two went much smoother than phase one because we had gotten familiar with the software and we had more classroom knowledge under our belt,” Mangiafico said. “I actually used something I learned just a few weeks before phase two to solve one aspect of the problem they gave us.”

According to Will Peterson, head of the senior team and MGE undergraduate, a tight-knit team that worked hard to communicate was the key to their victory.

“This has been one of the closest teams that I have worked with and I enjoyed every moment I get to spend with them,” he said. “It is my belief that this cohesiveness was paramount in the eyes of the six, industry-veteran judges, but more importantly our own enjoyment of the project.”

Brad Ross, Director of the Geotechnical Center of Excellence and Professor of Practice at the Lowell Institute for Mineral Resources, was impressed with the professionalism and thorough work of both teams.

“The [senior] team went above and beyond by visiting local sand and gravel mines to better understand how those operations worked. They talked with the engineers who designed those mines to find out more about the intricacies of designing sand and gravel mines,” Ross said. “Even with one less year of experience than most of their competition, the junior team’s work was remarkably complete and professional.”

Steve Trussell, Executive Director of both the Arizona Rock Products Association and the Arizona Mining Association, was also excited to see the students’ final results.

“The Arizona Rock Products Association and Arizona Mining Association could not be more delighted to hear of the recent success of the aggregate and metals design teams from the University of Arizona. These accomplishments demonstrate not only the fortitude of the students but also the skills and preparedness these students are receiving in UArizona’s world class program,” he said. “Both the rock products industry and hard rock mining industry look forward to working with these accomplished students and future leaders of our industry sectors.”