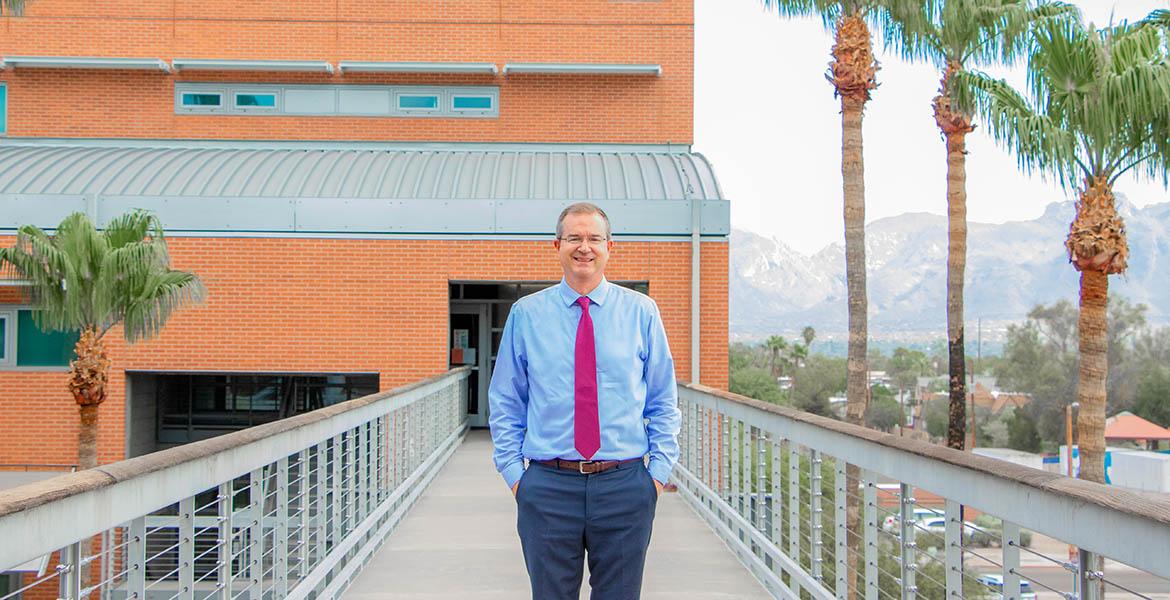 David Hahn, who has more than two decades of experience in higher education and with national agencies and laboratories, is the 14th dean of the University of Arizona College of Engineering. (Photo: Jessica Villasenor / UA Foundation)

By
Emily Dieckman
Time to read
2 minutes
Print
a- a+
Read so far
The college’s new leader is excited to be at a university where the mission matches up perfectly with his vision for engineering education.

In his 20 years at the University of Florida -- including eight as head of the Department of Mechanical and Aerospace Engineering -- David Hahn oversaw the construction of a 4,000-square-foot student design center and increased the number of female BS graduates in his department to 20% -- about 50% above the national average for mechanical and aerospace engineering.

On July 1, he started his new role as dean of the University of Arizona College of Engineering, where fostering diversity and providing hands-on learning opportunities for undergraduates are at the forefront. For example, a recent gift to the college is funding a four-year design experience for biomedical engineering students, and significant plans are in the works to expand the opportunity across all engineering majors.

“The University of Arizona has so much positive change going on right now, with a new provost, new deans and a new, visionary president,” Hahn said. “My vision for the college is fully aligned with the strategic plan of the university.”

Hahn, who earned his bachelor’s and doctoral degrees in 1986 and 1992 in mechanical engineering from Louisiana State University, has been interested in the work of engineers since he was a boy playing with Legos. Over the course of a career in government, national laboratories and higher education, he’s found that engineering principles can be useful in many professions. His background in thermal sciences taught him about conservation and balance of systems, which can be applied not only to his specialization of heat transfer, but also to situations like a college financial system or budget.

“I think engineering is an outstanding foundation for whatever you want to do in life,” he said. “It is a fantastic baseline for how to attack problems, how to approach things analytically, and how to use math and other tools to design solutions and to innovate.”

Hahn is looking forward to guiding engineering in support of the five pillars of the university’s strategic plan: the Wildcat Journey, tackling society’s grand challenges, advancing the Arizona Advantage, expanding global initiatives and pursuing institutional excellence. He’s especially enthusiastic about combining the first two pillars by giving students hands-on experiential learning opportunities to address some of today’s most pressing issues, such as food and water, energy, health care, and security.

Diversity and inclusion are also important to Hahn: At UF, he worked with a women’s studies expert to reduce the gender disparity in his department. He’s also had a mix of races, ethnicities and nationalities in his own research group throughout his career.

If you want to do something to benefit society, benefit people, benefit the planet, I would tell anybody, ‘Engineering’s your place.'"

“I can say firsthand from observing the interaction of diverse groups that having such a team always brings more creativity,” he said.

Hahn is a firm believer that an engineering education can take a person anywhere, but he’s particularly fond of working in academia, where researchers have the intellectual freedom to pursue what interests them and help shape the next generation of engineers.

Professors make a positive difference in students’ lives, helping them earn their degrees and watching them move onto their own jobs, he said. Department chairs and deans take it to the next level.

“There is a lot of satisfaction in seeing the success of your students; however, seeing a young professor you hired get tenure or win a young investigator award, or watching a multidisciplinary team you helped bring together win a significant grant, is every bit as fulfilling.”

Hahn echoed a sentiment former Dean Jeff Goldberg expressed at a recent event: Through work to make power plants sustainable, improve health care and create a better infrastructure, for example, each engineer has the ability to make hundreds of thousands of lives better.

“If you want to do something to benefit society, benefit people, benefit the planet, I would tell anybody, ‘Engineering’s your place,’” Hahn said. “It can empower you to do anything you want to do.”

Hahn and his wife, Allison, are already acclimating to life in Tucson and the region’s famous “dry heat.” They are enjoying hiking and trips up to Mount Lemmon. The Hahns have two daughters and one son, all graduates -- or soon-to-be-graduates -- of the University of Florida, and a dog, Ophelia, who is embracing her role as part of the Wildcat family.