By
Sydney Donaldson
Time to read
1 minute
Print
a- a+
Read so far
Visiting undergraduate students, including some who are the first in their families to attend college, experience hands-on research -- and hands-off driving -- in a National Science Foundation program at the University of Arizona this summer and demonstra

They initially thought academic research might be boring or beyond their ken. But this summer, 12 visiting undergraduate students from New York Institute of Technology, University of Illinois, Georgia Southern University and other schools astounded themselves with their talent for research and the ways in which research empowered them -- by being able to remotely operate a driverless car, for example. 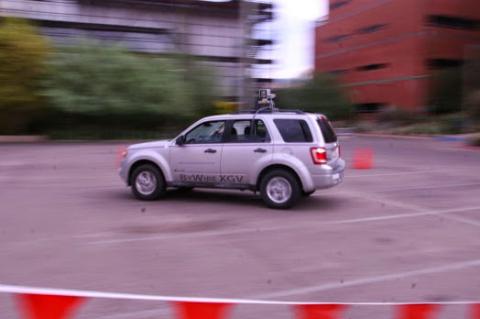 The UA CAT Vehicle drives itself around a campus parking lot.

These students are participating in the National Science Foundation’s Research Experiences for Undergraduates, or REU, program, designed to give students from diverse backgrounds research opportunities at major U.S. universities.

“We’re showing these students what research is really like,” said UA’s Jonathan Sprinkle, associate professor of electrical and computer engineering and well-known expert on complex autonomous systems, including driverless car technology. He has hosted the REU program at the University of Arizona for the past three years.

“Research experience is a key indicator for success in science and engineering, and we’ve got an incredible cohort of students working on exciting projects that pique their interest,” Sprinkle said.

Working in Sprinkle’s lab, the REU students developed apps for controlling the UA Cognitive and Autonomous Test, or CAT, vehicle, which Sprinkle and other researchers developed in his lab. The students will demonstrate using their apps to control the CAT car on Tuesday, August 11, on the UA campus (see box). 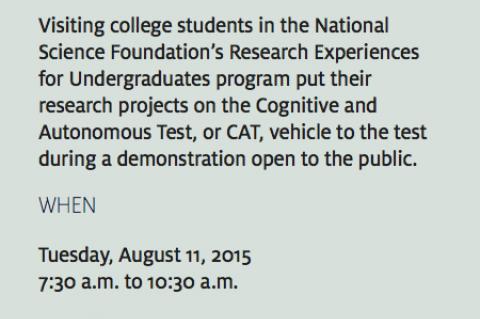 Not Just for Albert Einstein

“I always thought academic research was for the Albert Einsteins of the world,” said Yesenia Velasco, a North Carolina Central University computer science major and the first in her family to attend college. “I’ve learned that’s not true at all. Anyone can do research if they are determined enough.”

She and REU student Charles Jawny, a computer engineering major from Florida’s Nova Southeastern University, have developed a computer algorithm that changes the CAT vehicle’s functions, such as tire angle or vehicle orientation, based on its surroundings to avoid obstacles in the road.

“I was surprised how self-directed research is,” Jawny said. “The self-paced speed gives me a chance to explore my own research interests while finding answers to difficult questions.”

The National Science Foundation’s Research Experiences for Undergraduates, or REU, program works to increase diversity in science, technology, engineering and math by giving students from colleges around the country hands-on academic research experience at major universities.