Victory Is Sweet at Hack Arizona 2016

By
Jill Goetz
Time to read
2 minutes
Print
a- a+
Read so far
From Apple Watches to Raspberry Pi’s, top prizes at January hackathon go to UA Engineering students.

They steered drones and slayed them, built musical instruments and played them. 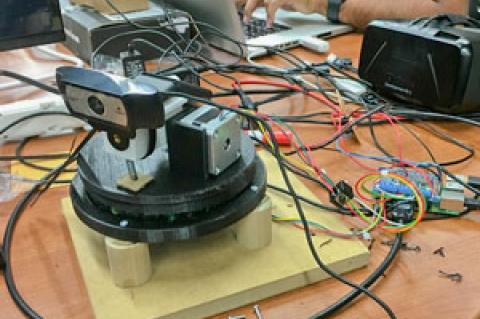 Light-headed? A laser drone-control device that can be mounted on the head won Hack Arizona’s best hardware award.

University of Arizona engineering and computer science students swept the top awards at Hack Arizona 2016 on Jan. 23 and 24, when some 700 U.S. undergraduate students built nearly 100 projects from scratch over 36 hours in the UA Science and Engineering Library. Sponsors included Amazon, Cisco, Google, Intuit and Raytheon.

The software program manages multiple unmanned aerial vehicles, or drones. Users can watch, monitor and manipulate 100, 1,000 or 10,000 drones in real time with a web-based interface featuring Google maps and other apps. 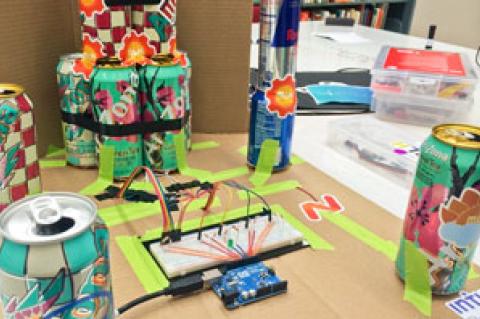 “Enterprises around the world are exploring widespread deployment of UAVs, but there are major challenges in efficiently managing them,” said Omo, who belongs to the UA Arizona Autonomous Vehicle Club. “Our software is unique. Instead of people controlling individual drones directly, they program software to delegate assignments to groups of drones.”

Omo and Rowley hope to build in more apps for directing drones to automatically respond in emergencies. For example, the software could reassign drones to search-and-rescue tasks in the event of an industrial accident or natural disaster.

“With DFAC, the Hack Arizona team saw a rock-solid alpha prototype of a very exciting potential application that has the capabilities to radically transform any industry,” judges noted.

“One of my favorite things is to get together with a lot of people who know a ton of stuff. I have a pretty narrow range of knowledge. At Hack Arizona I was surrounded by all these very cool people with a lot of knowledge to share.”

Their concept emerged when Hicks and Rane gained access to a 15-watt laser. The five students wondered if they could use the powerful laser to shoot a small UAV out of the sky, but quickly realized it could be dangerous.

So they scaled down to a 10-milliwatt laser. Using the Oculus Rift virtual reality program and parts made from a 3-D printer in the library, they built a device that emits laser beams to control drones in the sky. Safely, that is.

The students have honed their drone skills at the UA. Rane and Rembelski are officers in the student chapter of the American Institute of Aeronautics and Astronautics, and Hicks and Rane have launched a drone safety startup, Apollo Robotic Systems, with another UA student and alumnus.

“What do you get when you combine electrical engineers, a mechanical engineer, a biomedical engineer and a common love of music and the environment?” wrote the four UA College of Engineering students in their submission for Mini Midi Recyclable. “An insanely fun musical instrument created from the leftover spoils of a hackathon well done.”

The friends hatched the idea after visiting a record store and purchasing some vinyl the weekend before the hackathon.

While rocking out to the Eagles, Bon Jovi and Boston, they decided to build a fun and environmentally friendly musical instrument.

On-site in the library, they gathered discarded aluminum cans. Using the Musical Instrument Digital Interface software program, an Arduino microcontroller and stickers handed out by sponsors, they rigged the cans to emit musical tones when touched.

The team performed an Eagles-inspired tune for Hack Arizona judges on Sunday morning in the UA Memorial Student Union.

What’s next for this winning team?

“Probably a world tour … to save the Earth.”