By
Jill Goetz
Time to read
1 minute
Print
a- a+
Read so far
SIE Professor Larry Head receives a second D. Grant Mickle Award for best paper from the U.S. Transportation Research Board, and his former student wins the first-ever award for best dissertation from a Chinese transportation organization.

Larry Head, a professor in the University of Arizona department of systems and industrial engineering, has received the 2016 D. Grant Mickle Award for outstanding paper in operations and maintenance from the Transportation Research Board. 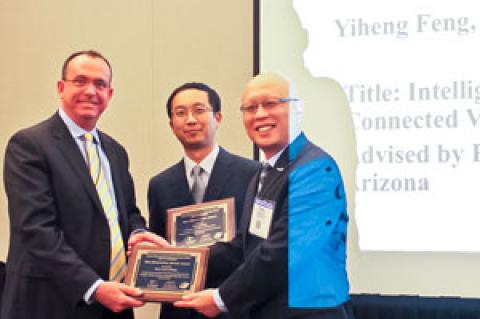 He accepted the award at the organization’s 95th annual meeting, held on January 10-14 in Washington, D.C., and attended by 13,000 transportation researchers, practitioners and policymakers.

Through computer simulations with resonant cycling, the UA researchers reduced travelers’ delays by 8 percent and traffic stops by 19 percent on stretches of State Route 77 and 22nd Street in Tucson, Arizona. The paper appears in a 2015 issue of the Transportation Research Record.

“This is an important paper that takes the earlier theoretical work and makes it useful for practicing engineers, said Head, director of the UA Advanced Traffic and Logistics Algorithms and Systems research center, or ATLAS, where the research was conducted.

Head’s coauthors are Felipe Ladrón de Guevara, who earned his PhD in civil engineering at the UA in 2015 and is an engineer with Kittelson & Associates Inc. in Tucson, and Mark Hickman, Guevara’s former adviser and UA faculty member, now chair and professor of transport at the University of Queensland, Australia.

This is Head’s second Mickle Award, which he previously won in 2009 for a paper on long green lights and traffic congestion. The award is named for a former Michigan transportation official and president of the Institute of Transportation Engineers.

Yiheng Feng, who earned his PhD in systems and industrial engineering from the University of Arizona in 2015, is the first-ever recipient of the Best Dissertation Award from the Chinese Overseas Transportation Association.

He received the honor January 10 at the group’s 19th annual winter symposium in Washington, D.C., where he presented his research on traffic signal control for connected vehicle technology.

He did his research at the UA Advanced Traffic and Logistics Algorithms and Systems research center, or ATLAS, with center director Larry Head as his adviser. Feng is now a research fellow at the University of Michigan.