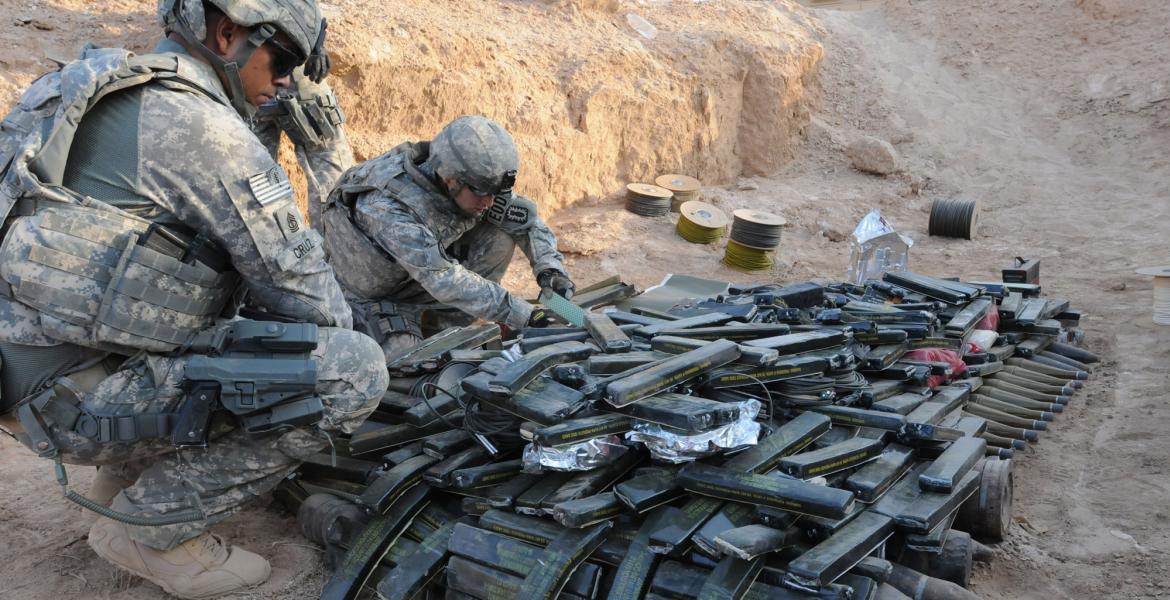 1st Sgt. John R. Cruz, left, of the 722nd Explosive Ordnance Disposal Co., supervises the placement of explosives at an ordnance disposal range outside Camp Ramadi in Iraq. Conventional munitions are liable to detonate when subjected to heat or shock, but IMCs could reduce troop injuries and fatalities during routine munitions handling or during combat. (Photo: Staff Sgt. Nancy Lugo, 282 PAO NCO)

By
Ed Stiles
Time to read
3 minutes
Print
a- a+
Read so far
UA researchers are investigating bacterial eating habits as part of a $1 million study to determine the environmental fate of newly developed munitions.

University of Arizona researchers are studying the environmental effects of insensitive munitions compounds, or IMCs, which are new, more stable explosives that won't detonate in response to heat or shock.

Not much is known about the environmental impact of IMCs, which the Department of Defense hopes will reduce injuries and fatalities among troops who handle explosives.

"The idea is that if you're driving in a caravan and get hit, the munitions in your truck won't detonate," said James A. Field, head of the UA Department of Chemical and Environmental Engineering. IMCs are mixed with conventional explosives to make them more stable.

Field and three other UA researchers are studying how these explosive mixtures interact with the environment under a 3-year, $1.04 million grant from the Strategic Environmental Research and Development Program, a Department of Defense partnership with the Environmental Protection Agency and the Department of Energy.

"The Army is taking a very proactive role here," Field said. "They're trying to discover the environmental consequences before deploying these new compounds. No one really knows what their effect will be on the environment. So we're looking at their fate and toxicity, how they interact with the soil, their degradation pathways, and whether they may pose a threat to surface water or groundwater."

The intermediate compounds formed when IMCs degrade may be toxic or nontoxic, Field added. They might be cytotoxic, meaning they have an immediate, but reversible, effect on cells. Or they may be mutagenic -- cancer causing.

"One thing for sure is that a lot of these compounds get reduced to aromatic amines, making them very reactive," he said. The carcinogenic compounds that form on barbecued meat are examples of aromatic amines.

Bacteria play a large part in breaking down compounds in the soil, Field explained. They do this directly by metabolizing (eating) the compounds, or indirectly through co-metabolism, which occurs when the bacteria consume other food sources, such as plant material, and provide energy to convert IMCs to intermediate compounds.

Eventually, these intermediates either further degrade or become locked up in stable organic matter called humic polymers that are relatively safe. "In fact, the Army has found that the safest way to clean up TNT, for instance, is to compost it, and that mostly promotes polymerization into humus," Field said.

The trick now is to discover which of the millions of organisms found in soil will break down IMCs. This needle-in-a-haystack search starts with soil from military sites where specialized organisms may already have evolved in the presence of explosives.

"We will take a bit of this soil and supply only one food source -- a nitro-aromatic compound -- and then see if there is a bacterium that knows how to do something with it," Field said. "There may be [100,000] different species and maybe one can have just the right enzyme to knock off the nitro groups or just the right enzyme to break open the IMC's chemical bonds and initiate an attack."

"Then we'll use molecular ecology techniques to identify the bacterium," he added. "That's the exciting part of scientific discovery."

The big question is how microorganisms will transform the IMCs. Will the intermediate compounds contaminate the groundwater, or will they be quickly absorbed into the soil and become bound up in the humus?

"Once we know the intermediate compounds, we can test them for toxicity and monitor the soil to see which toxic compounds are accumulating at test sites or stockpile areas," Field said.

"I think the most important direct information we can give land managers now is that air is really important," Field said. If there is a lot of air in the soil, the IMCs are more likely to degrade into a safe, stable end products. In less aerobic or anaerobic environments, the reactive intermediates are more likely to persist for a long time.

Site selection is important. "Don't pick a site near a wetland or one with soils that are not well aerated," Field said.

After the microbes that degrade IMCs are identified, gene probes can be used to determine if they're present at a training ground or storage site, he said. It's best to find a site where the microbes already exist, he added, rather than trying to introduce them. "There are examples where bio-augmentation has been proven to work, but the applicability is not as successful as people think," Field said.

The grant is one of four recently awarded to the University of Arizona to address DOD environmental issues. Two of the grants focus on climate change and two, including the one being pursued by Field's group, involve the environmental fate of IMCs.