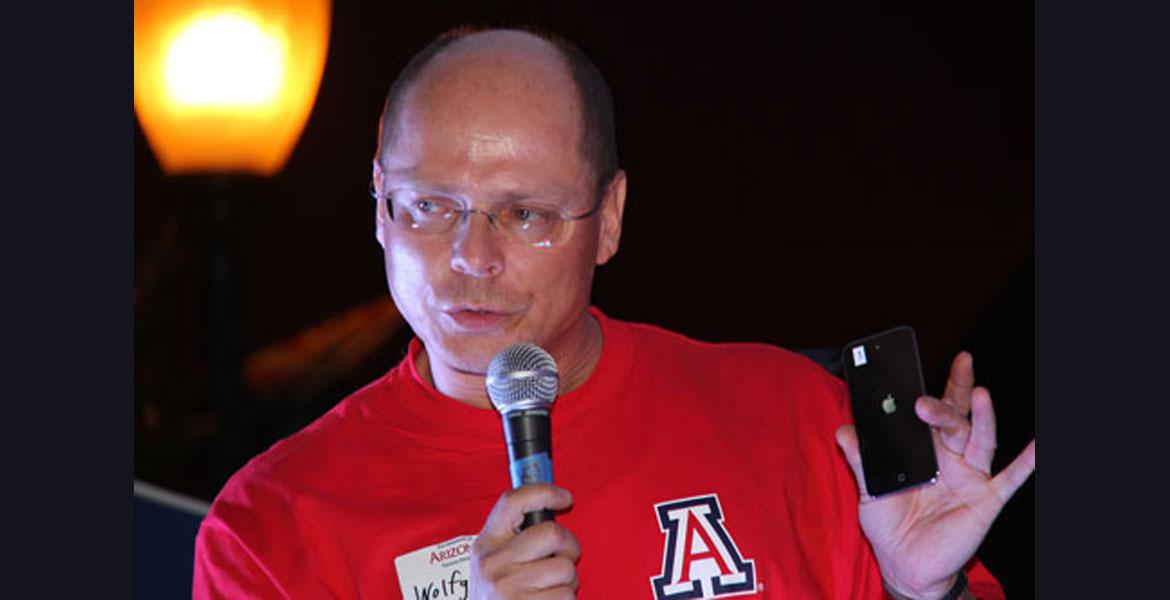 At the 2011 Arizona Best Fest in Prescott, Ariz., Wolfgang Fink demonstrates the iPod he uses to control his prototype planetary rovers during a demonstration. The rovers will eventually be autonomous and beyond his immediate control. (Photo: Pete Brown)

By
Pete Brown
Time to read
3 minutes
Print
a- a+
Read so far
University of Arizona College of Engineering professor Wolfgang Fink has been elected to the College of Fellows of the American Institute for Medical and Biological Engineering.

Fink is an associate professor in the UA department of electrical and computer engineering, where he is the founding director of the Visual and Autonomous Exploration Systems Research Laboratory and holds the Edward and Maria Keonjian Endowed Chair. Fink also has joint appointments in the departments of biomedical engineering, systems and industrial engineering, and ophthalmology and vision science.

Fink was elected for his outstanding contributions in the field of ophthalmology and vision sciences with particular focus on diagnostics and artificial vision systems.

"The 107 inductees consist of some of the most talented and influential members of our field," said Kenneth Lutchen, AIMBE president and dean of engineering at Boston University. "It is both a pleasure and an honor to welcome the Class of 2012 to our College of Fellows."

The AIMBE College of Fellows consists of 1,000 outstanding bioengineers in academia, industry and government. Fellows are nominated each year by their peers and represent the top 2 percent of their field.

"I feel very honored to be recognized as part of the top two percent of medical and biological engineers in the country," Fink said. "It is very rewarding to work on projects that have an immediate beneficial impact on people's lives."

Fink's research into artificial retinas, funded by the U.S. Department of Energy and the National Science Foundation, helps restore some sight in blind patients with age-related macular degeneration or retinitis pigmentosa, two diseases that leave the eye's retina unable to convert incoming light into electrochemical signals, enabling people to see.

The DOE artificial retina project -- a consortium of five national laboratories, four universities, and a private company -- led to the development of an implantable microelectronic retinal device that restores vision to people blinded by retinal diseases. The system uses an eyeglass-mounted camera, a control chip and electrode array implanted in the eye, and an image processing and stimulation device worn on a belt.

Fink's part of the project involved developing a real-time image-processing system, determining the most effective electric stimulation patterns, and designing a robotic surrogate for patients with the vision implant. This robot, known as "Cyclops," is being used to test and refine the implant's image-processing software by simulating day-to-day experiences of blind people. Cyclops is given the same low-resolution camera vision that an implant carrier would have, and told to perform certain tasks, such as navigating around furniture in a room.

In 2010, Cyclops was featured in Popular Science, which voted it one of the top 10 most advanced human-assist robots in the world. Previously, in 2009, the DOE artificial retina project won R&D Magazine's R&D 100 Award and the publication's Editors' Choice Award as one of the top three of the 100 award winners that year.

Reflecting his Army- and NASA-funded research projects, Fink is particularly interested in how human vision responds to the extreme environments found in space and the upper atmosphere. "Vision is our primary sense and visual information is essential during all phases of daily life and operations," Fink said. "Civil, military, and spaceflight environments have many significant effects on the visual and ocular system that can adversely affect visual performance, and may lead to long-term health consequences."

Other recent accomplishments include developing an implantable, optically powered wireless intraocular pressure sensor for monitoring glaucoma, and a tactile feedback device that enables blind people to optimize their vision provided by artificial implants.

A major plank of Fink's current research is the concept of future planetary research being conducted by a hierarchy of intelligent, autonomous robots that could include satellites, airships or blimps, and a fleet of rovers or lake landers.

The Wonder of Robots

Fink's term for this concept is "Tier-Scalable Reconnaissance." The idea is that an orbiting satellite would direct atmospheric blimps to scan potentially interesting areas of a planet's surface. The blimps would then deploy surface-based rovers to investigate geological features in detail and collect samples in situ.

Instead of waiting hours to receive commands from mission control on Earth, communication between the tiers in this robotic hierarchy would take mere milliseconds, and the satellite at the top of the chain of command would make intelligent decisions about which sites were safest or might yield the most interesting results.

Fink's aim is to endow robots with curiosity. He wants them to generate the intent to investigate certain situations and environments, and then learn from those investigations so they can make increasingly smarter choices about where to go and what to investigate next. In 2009 he received the NASA Board Award for this work.

Fink is a visiting associate in physics at the California Institute of Technology, and visiting research associate professor of ophthalmology and neurological surgery at the University of Southern California. He was a senior researcher at NASA's Jet Propulsion Laboratory from 2000 to 2009.

Fink obtained his bachelor's (1990) and master's (1993) degrees in physics and physical chemistry from the University of Göttingen, Germany. In 1997, he earned his doctorate in theoretical physics from the University of Tübingen, Germany. He has more than 160 publications, and holds 12 patents, eight of which are in the biomedical engineering field.