College students often have several months to prepare for national competitions. The UA chapter of the National Society of Black Engineers, or NSBE, had only two -- and the team went on to win the 2014 NSBE Undergraduate Technical Research Competition in March at the NSBE 40th Annual Convention in Nashville, Tenn. 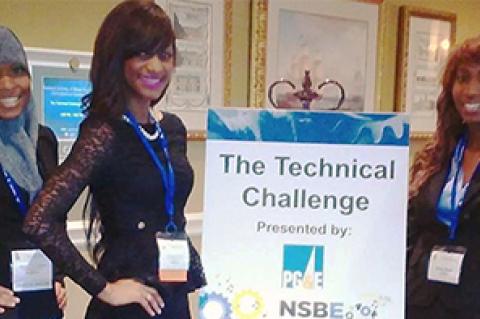 UA beat two teams from the University of California, Merced, in the first such contest hosted by the Pacific Gas & Electric Co./NSBE Network. The winning team earned $2,000 and invaluable exposure to industry leaders.

The challenge: Improve inspection of natural gas pipelines, above and below ground.

Utility operators use many technologies to inspect the inside of their pipelines. The most sophisticated are battery-operated robotic crawlers. The robots, which travel along the pipeline, are equipped with sensors that transmit data to off-site information centers. The UA team’s competition entry promises to increase the distance robotic tools travel and improve the quality of data transmitted.

The students’ idea for a self-powering mechanism for the tools was based on the principle by which dynamos on bicycle wheels power bicycle lights. The dynamo system could recharge the robot’s batteries without utility workers having to enter pipelines. It could also power additional sensors on the crawlers, such as high-definition cameras, for higher-quality data.

But the team took its task a step further. Not only could its power source expand the robot’s range and enhance data transmission and quality, it could also help operators precisely locate the tool and any anomalies they detected, such as cracks or corrosion.

Drawing from geometry and math and led by NSBE chapter program chair Moses Wangusi, a materials science and engineering student, the team developed a geolocalization system using specially designed wheels attached to the tools. The system relied on odometry rather than GPS, which does not always work with underground pipelines.

“I thought it was quite ingenious of the students to develop a method that not only improved long-distance telecommunications, but pinpointed the robotic tool’s precise location as they traveled along the pipeline,” said the team’s mentor, Wolfgang Fink, UA associate professor of electrical and computer engineering and Edward and Maria Keonjian Endowed Chair. NSBE chapter members sought out Fink, who now serves as their 2014-2015 faculty adviser, because of his expertise in robotic space exploration and computer-optimized design, and his reputation for being a highly engaging professor.

Presenting at the conference for the team were Abdul-Wahid, along with former NSBE chapter president Iesha Batts, a chemical engineering major, and chapter vice-president Jerri-Lynn Kincade, a biomedical engineering student.

“I am so grateful to Dr. Fink for his guidance. He showed us his research papers to help us in writing our own, and coached us in practicing our presentation,” said Kincade, who is working this summer in the UA’s highly competitive clinical immersion program in biomedical engineering.

Going Above and Beyond

Getting off to a late start on the project after winter break, the UA team toiled largely after hours and on weekends and devoted spring break to putting finishing touches on its technical paper and presentation. Their extra effort did not go unnoticed among competition judges.

“The UA students approached the problem from a fresh perspective, and they were well prepared to justify their position,” said Ben Wu, senior gas engineer at PG&E and a competition judge. “They also made considerations of cost and ease of use, which are critical to real-life deployment of any technology.”

“This competition solidified my interest in the energy field,” she said. “My main goal is to work for an energy company and monitor pipelines to make sure they are functioning properly and not releasing contaminants into the environment.”

The all-undergraduate team plans to submit the winning paper to a peer-reviewed journal later this summer.

With more than 30,000 members ranging from pre-college students to professional engineers, NSBE aims to attract and retain black engineering students, develop leadership skills, and increase the number of successful black engineers who can make positive contributions to their communities.