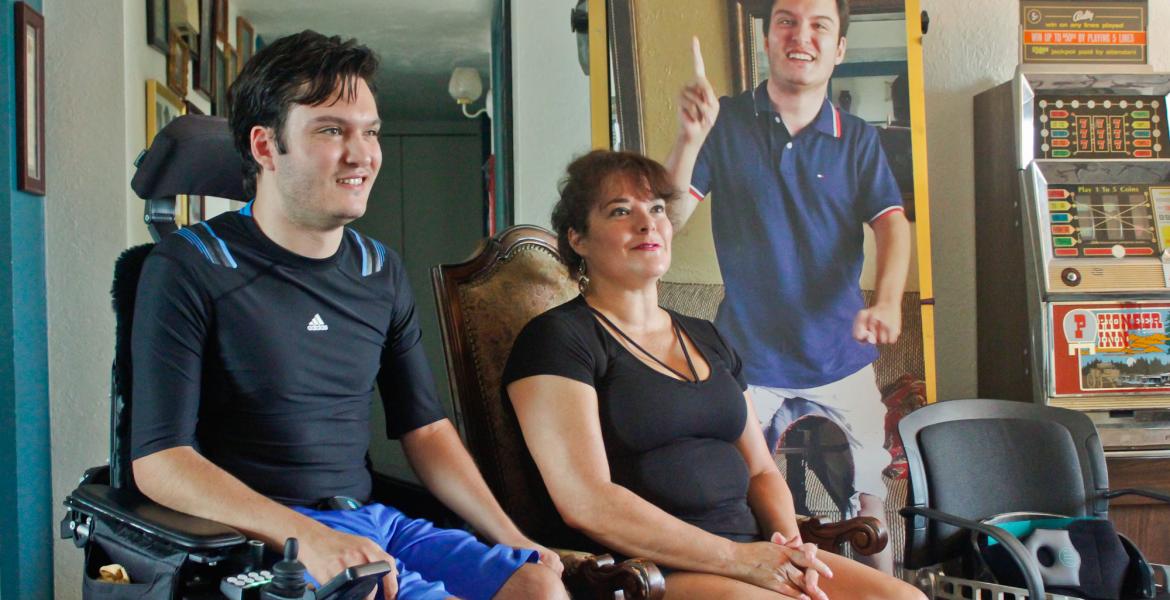 Jeffrey, left, and Hermelinda Bristol at their home in Tucson, Arizona.
Home / Stories / UA Engineers Help a Fellow Wildcat Walk After 19 Years in a Wheelchair

By
Emily Dieckman
Time to read
3 minutes
Print
a- a+
Read so far
Students in the Engineering Design Program help a young man retrain his brain and muscles after an aneurysm, and Tech Launch Arizona works to make the same technology available to others in need.

When Jeffrey Bristol had his first brain aneurysm at age 2 1/2, the doctors said he’d probably never get out of bed on his own again. Thirteen days later, his neurologist almost fell over in surprise when Jeffrey ran up to greet him.

When Jeffrey had his second brain aneurysm a year later, they said the same thing, and his mother Hermelinda Bristol shrugged it off. Jeffrey was a fighter -- he’d be back on his feet in no time, she thought. Twenty years later, Jeffrey stands in his kitchen with metal braces attached to his feet, practicing taking a few steps like he has every day for the past year.

The metal foot pieces are the last remaining elements of the “lightning legs” exoskeleton a team of senior engineering students designed for Jeffrey as their Engineering Design Program senior project in 2017.

The exoskeleton rig originally weighed more than 20 pounds, and included elements that ran up Jeffrey’s legs and around his waist. The waist, said Hermelinda, was the key element: It held Jeffrey’s torso upright so that he didn’t lean forward and lose his balance every time he tried to take a step. With consistent practice and the support of his family, Jeffrey has retrained the way his brain communicates with his muscles and has been able to take off the leg and waist elements one by one.

“I felt like I was ready,” said Jeffrey, a 23-year-old senior at UA studying accounting. “My muscles were strengthened, and I just felt that I needed to take the next step and do my best, as I always do.”

The Latest and Greatest

Jeffrey’s lightning legs aren’t the first device he’s tried out to help him walk. Hermelinda always wanted him to have as normal a life as possible. When he was a kid, she helped him support himself against a post so he could play baseball in the backyard with his two brothers. She made rigs out of a skateboard, a motorcycle spring and even carabiners hanging from her living room ceiling so Jeffrey could play Wii with his family and friends. Another attempt at an exoskeleton involved a weightlifter’s belt and some help from friends who knew how to weld.

She approached the Engineering Design Program about creating a more formal device to help Jeffrey walk in 2016, and donations for the $10,000 sponsorship fee poured in quickly. Hermelinda selected five biomedical engineering students and one mechanical engineering student whom she felt had the right blend of heart and technical know-how to create the device. Within two weeks of using the exoskeleton in spring 2017, Jeffrey could stand up and maintain his balance on his own.

“Hermelinda is probably one of the most determined people I know,” said team lead Jason Keatseangsilp. “Jeffrey was great to work with, too. He was always excited to meet with the team.”

Although he’d only been using it for a few weeks, Jeffrey demonstrated the device to a crowd at Engineering Design Day 2017, and the team who created it won an engineering ethics award.

When the crowds were gone and the seniors working on the project had graduated, Jeffrey kept working hard. After nine months, he and Hermelinda decided to try taking off the waist piece to see if Jeffrey could walk without it. He couldn’t. Hermelinda went to bed crying and praying, but the two of them both woke up with renewed determination.

“On the next run, the next day, he walked,” Hermelinda said. “Two months before, his brain didn’t know certain things, and now they were happening.”

Jeffrey’s muscles continued learning how to support him and began needing fewer and fewer pieces of the exoskeleton’s external support. As Jeffrey makes strides every day, however small, Hermelinda has begun pursuing a patent for the device through Tech Launch Arizona with the hope that it will help more people like her son.

“Hermelinda’s dedication and perseverance to Jeffrey’s rehabilitation show how the road to discovery can be a winding one before you get it right,” said Bob Sleeper, licensing manager for the College of Engineering at Tech Launch Arizona. “In this case, the end impact is twofold: It’s having an astounding impact on Jeffrey’s future, and others will learn to walk as a result of Hermelinda’s and Jeffrey’s hard work.”

Hermelinda is candid that the road has had both its difficult and fun parts, but she can’t imagine handling it any differently as a mother. It’s Jeffrey, she insists, who is impressive in his steadfast determination to work toward his goals every day. As his core strength has improved, so has his confidence, and even the clarity of his speaking voice.

“I’ve always chosen to get up every day and do my workouts and walking, all the while having fun,” Jeffrey said. “Every day consistently. That’s what it takes to do what you want to do.”

Jeffrey knows this better than most. It was his determination that allowed him to relearn skills many people take for granted, like holding a pencil; to graduate from high school and attend college; and, indeed, to make it to this point. As he prepares for his graduation in spring 2019, the plan is that his dedication will help him go out with his classmates in style.

“He graduates in May, and our goal is that he will walk with the class,” Hermelinda said.