Mechanical engineering meets public health in a project to develop a way to predict who is at risk of a hip fracture in the hope that such injury can be avoided. 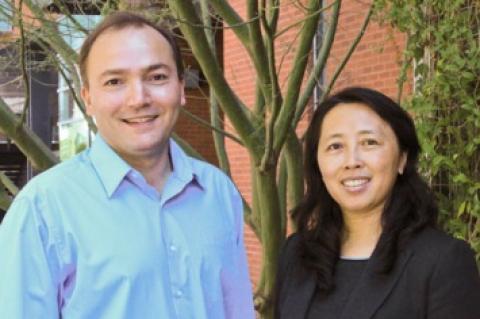 Hip fractures are a major contributing factor to disability and death in older women -- a problem that will become even more acute as the world’s population ages.

That’s why UA engineers and public health professors are developing a sophisticated, ultimately Internet-based, computer model to identify those most at risk.

The model will help patients make medication and lifestyle changes to reduce their vulnerability to fractures, potentially eliminating much suffering while reducing insurance costs.

More than 300,000 hip fractures occur each year in the United States alone. About 16 percent of non-Hispanic white women and 3-5 percent of Hispanic and African-American women will suffer a hip fracture during their lifetime. Of these, 5-12 percent will die within a year of the fracture.

Samy Missoum, associate professor in aerospace and mechanical engineering, and director of the Computational Optimal Design of Engineering Systems lab, is co-principal investigator on this project with Zhao Chen, professor and director of the epidemiology and biostatistics division of the UA Mel and Enid Zuckerman College of Public Health.

Several predictive models already exist, but they do not consider hip geometric structure, such as width of the bone, said Chen. And they don’t consider nonlinear interaction of various risk factors, which limits their precision, she added.

The nonlinearities occur, for instance, when a slight change in femur radius results in a large increase in risk. A similar spike in risk might occur when the bone mineral density, or BMD, drops below a particular threshold. In turn, these two factors - femur radius and BMD -- also may interact in a nonlinear fashion, further exacerbating the problem, Chen added.

“We are trying to improve the prediction accuracy by using new methodology from a mechanical engineering perspective. We are also adding new variables for predicting hip fracture that don’t exist in current models, such as multiple hip geometry variables,” Chen said. “Eventually we hope to predict hip fracture risk in women five to 10 years out.”

Because of nonlinearities, identifying those at risk and accurately determining where they reside along the continuum from no risk to extreme risk is a complex problem that can’t be solved by simply eyeballing BMD and a few other statistics.

Chen and Missoum are working to meld these complexities into an accurate and easily manageable computer model that can navigate the maze of nonlinear interactions.

The unusual pairing of public health and mechanical engineering is key to creating this model, they explained. Their collaboration calls for combining different worldviews and terminology, which hasn't been easy. “It's taken us two years to try to learn each other’s language so we could communicate,” Chen said. “It’s been a fascinating process.”

“There are many parameters that relate to this problem, such as age, sex, height, weight, excessive alcohol consumption and diabetes,” Missoum said. “What hasn't been done is to combine those factors with hip geometry parameters. We are mechanical engineers. For us, this is a structural problem. If there is a slight change of geometry, then your chance of a stress concentration and fracture can be much higher or much less. It is an insight that is basic to our discipline.”

Missoum and his students are analyzing this data with a support vector machine, or SVM, a statistical method that can identify which combinations of risk factors will most likely result in fracture. While WHI data describes the contributing variables, the SVM can ferret out the relationships between these factors, isolating those that are most significant and determining how they interact. While doing this, the SVM algorithms also “learn” from existing cases and extrapolate from specifics to general rules that can be used to analyze the data from an individual patient.

“As epidemiologists, we don't use SVM,” Chen said. “So combining our medical and epidemiological experience with the engineering SVM expertise is helping us develop a model that neither of us could create on our own.”

Once a basic model emerges from the SVM analysis, additional data may be needed to refine its predictive capabilities. But there are no clinical studies that can provide this data. Missoum and his students plan to use finite element analysis to gather such data from a virtual patient population. Finite element analysis is a numerical method for analyzing complex structures. The finite element models will simulate a variety of patients with a range of hip geometries and bone material properties.

Once a fracture risk calculator emerges from SVM and finite element analysis, it will be validated by comparing it to FRAX, a new predictive model developed by the World Health Organization, and with other models. It also will be validated with data from new clinical studies.

“We're going to simplify the model to the minimum number of predictors that will give a reasonable prediction,” Chen said. The current list of about 40 factors that can influence hip fracture will be honed to the five to eight most critical variables. “We don’t want to burden patients and physicians with many data points,” she added. “People will just need to enter the five to eight variables, and they can calculate their probability of a hip fracture in the next five to ten years.”

Those at risk then can pursue various mitigation strategies, such as medications and exercise programs designed to build strength and balance. In addition, therapists can visit patients’ homes to identify risk factors such as loose rugs, dark corners and jammed hallways that might cause falls. Patients at very high risk also might be encouraged to wear hip protectors that can cushion hips during a fall.

Ultimately, the University of Arizona calculator will be posted on the Internet to provide a readily available and intuitive tool for doctors and patients, Chen said.

Better methods for identifying the risk could significantly affect these numbers, while improving the quality of life for older people, particularly women, Chen noted.