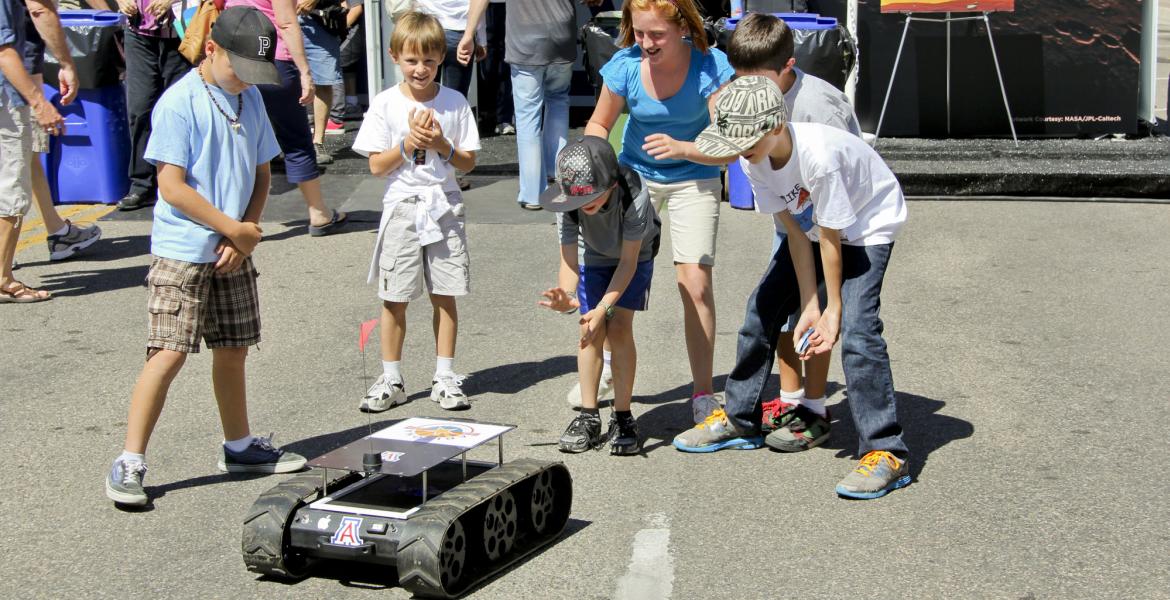 A group of children admire one of Wolfgang Fink's planetary rovers at the Arizona Best Fest in Prescott, Ariz. (Photos: Pete Brown)

By
Pete Brown
Time to read
2 minutes
Print
a- a+
Read so far
Engineers delight and intrigue crowds at Arizona's centennial with planetary rovers, robots and a solar-powered car.

UA Engineering was a big hit at the Arizona Best Fest, which took place Sept. 16-18 in Prescott, Ariz. The University of Arizona exhibit was packed solid even before doors officially opened as thousands of festival goers piled into the Science and the Future Pavilion to view hi-tech, hands-on demonstrations by UA students and faculty.

The Arizona Best Fest is a series of three festivals organized by the Arizona Centennial Commission to celebrate Arizona's first 100 years of statehood. The first festival, in Prescott, will be followed by similar events in Tucson and Phoenix. By some estimates, as yet unconfirmed, 100,000 visitors descended on Prescott to attend the Best Fest.

UA Engineering shared the Science and the Future Pavilion, sponsored by UA thanks to a generous gift from a UA supporter, with the College of Optical Sciences, Biosphere 2, the College of Science, Steward Observatory Mirror Laboratory, and the College of Medicine, Phoenix.

UA College of Engineering projects on display were Professor Wolfgang Fink's planetary rovers, Matt Bunting's hexapod robot, and the solar-powered car built and raced by Arizona Solar Racing. Professor Fink and grad student Bunting are both in electrical and computer engineering; the solar racing team are part of AzRISE, the Arizona Research Institute for Solar Energy.

"The response is overwhelming," Fink said as festival visitors streamed past him into the Science and the Future Pavilion. "I have met people from all backgrounds here, from excited kids to former JPL [NASA Jet Propulsion Laboratory] and Lockheed Martin employees," he said. "I have also talked to some local school teachers who want to teach their kids robotics."

Fink conducted planetary rover demos outside the pavilion, and on a stage adjacent to it, which attracted children, often dragging parents behind them, from all over the festival in downtown Prescott. Fink said he was "pleasantly surprised" at the huge crowds. "It's a good investment of time and resources," he said. "Well worth it."

Inside the 1,800-square-foot tent, children squealed in delight, and occasionally terror, as Bunting marched his hexapod robot around the raised demo area. Some visitors, parents and children alike, seemed to get the creeps as the hexapod robot's camera tracked their faces and seemed to watch them.

But not Doyle Bigelow, an eighth grader at Canyon Leadership Academy in Glendale, Ariz. "I like seeing how technologies come together to make things work," he said. Doyle brought a malfunctioning Lego robot to the hexapod demo, and became involved in deep discussion with Bunting about how to fix it.

"All the electronics fascinate me," said Doyle, who wants to be an electronics engineer. He said he'd always assumed he'd be going to Arizona State, but there was no way now he'd seen Fink's and Bunting's robots. "I'm going to the U of A," said Doyle. "Now I need to figure out what my PhD will be."

Elsewhere in the Science and Future Pavilion, crowds admired a life-size model of the Phoenix Mars Lander, took part in holographic demos by Optics College students, or got instruction on how to do chest-compression-only CPR from medical students.

Biosphere 2's Omniglobe was also a big hit with younger visitors. Internal projection illuminates the 30-inch-diameter glass sphere to look like a planet or moon, and users can choose to look at Earth's oceans, or the surface of Mars, or a host of other planetary simulations.

Everybody working in the tent was bowled over by the public's interest in the Science and Future Pavilion, and thrilled that it was such a big hit and got people involved in science and engineering. "The interactive component makes all the difference," said Fink.