One lived in space. The other is immersed in a world of computers. Both value those moments in time when everything just seems to come together. Together the two served as inspiration for more than 150 University of Arizona students, faculty and support staff during a recent Astronaut Scholarship Foundation check presentation. 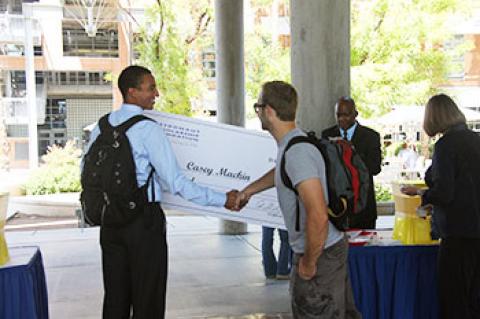 “I am sure our nation couldn’t be in better hands,” said Gibson, describing Mackin and 25 other 2012 Astronaut Scholarship recipients nationwide. The Astronaut Scholarship Foundation is a national nonprofit organization that promotes the retention of college students in the science and technology fields.

Mackin, an electrical and computer engineering honors student, works on the UA Data Adaptable Reconfigurable Embedded Systems, or DARES, project. He is helping develop ways to improve computing performance and efficiency. He said the most exciting part of research for him is the day a product is complete and ready to demonstrate.

“It gives you a sense of satisfaction when everything finally comes together,” said Mackin, encouraging fellow students to stay connected with their professors and get involved in research. “Research can be highly rewarding and will expose you to many other opportunities.”

Mackin attended high school in Sierra Vista, Ariz., and intends to pursue a doctorate after graduating from the UA next year. He credits his professors, especially Roman Lysecky and Jonathan Sprinkle, as well as his early involvement in research with motivating him to remain in academia.

“I plan to continue doing research during and after graduate school. I would like to remain in academia and hope to become a professor,” said Mackin. "I like the idea of building things and being able to create my own ideas and see whether they work."

The second half of the astronaut scholarship presentation included Gibson describing his 84-day orbit of Earth as science pilot in 1973 and 1974 during the Skylab 4 mission, the third and final manned flight to the Skylab space station. He described the explosion, vibration, acceleration and floating of takeoff and flight; his weightless home some 250 miles above earth; walking in space in a silent world except the whispers of his own breath, and the return home, to gravity.

“We will never stop exploring,” Gibson told attendees of the scholarship presentation, held at the UA Aerospace and Mechanical Engineering building. “It is hardwired into our psyche.”