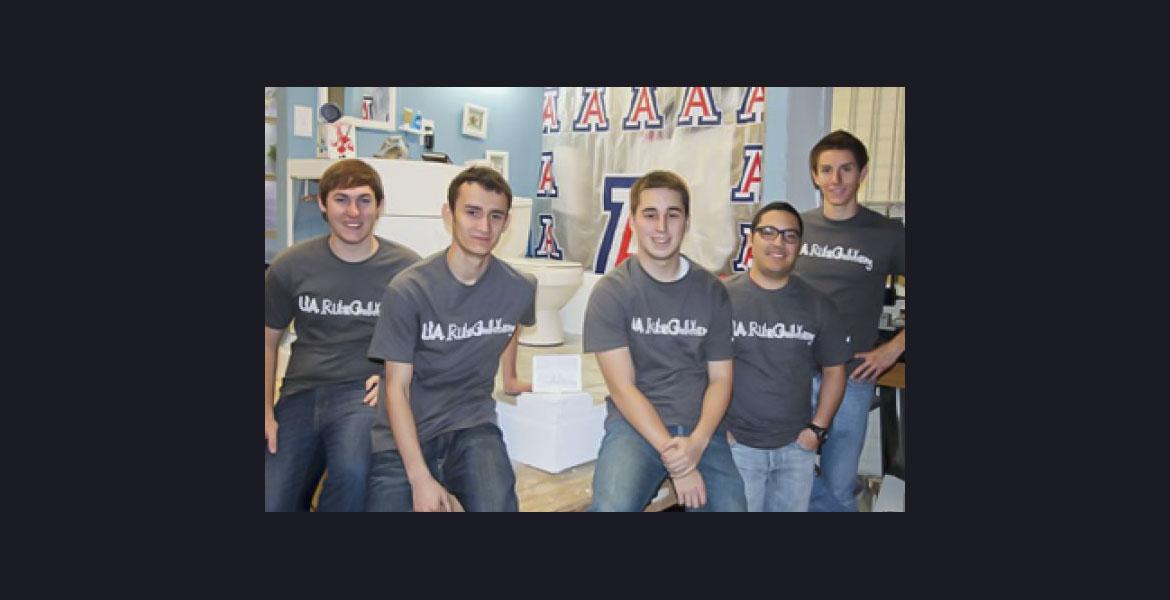 Members of the UA Rube Goldberg club in front of their contraption designed to inflate and burst a balloon. Note Wilma Wildcat lurking behind the shower curtain. How does it work? All will be revealed at the Western Region Rube Goldberg Competion Feb. 25 in Crowder Hall on the UA campus. Team members shown are, from left to right, civil engineering sophomore Steven Kassinger, optical engineering sophomore Oybek Kholiqov, electrical engineering freshman Alberto Martin, computer science junior Lamec Fletez, and materials science and engineering junior Chris Cantoni.

By
Pete Brown
Time to read
3 minutes
Print
a- a+
Read so far
Stand aside, Hitch, the Rube Goldberg team is here.

The most famous shower scene of all time has to be from Alfred Hitchcock's 1960 thriller, "Psycho," in which creepy motel owner Norman Bates, played by Anthony Perkins, repeatedly stabs a screaming Janet Leigh, who plays Marion Crane, a Phoenix office worker on the run with $40,000 of stolen cash.

Are you ready for a Rube Goldberg machine featuring Wilma Wildcat, in the shower, wearing nothing but a towel? Gasp!

Expect plenty of toilet humor from the ingenious contraption built by the UA College of Engineering's newest club, the UA Rube Goldberg Club, whose members for the last 6 months have been designing a machine that looks like a bathroom. The challenge for the machine is to inflate and burst a balloon in 20 or more steps.

During E-Week, the team will be competing in the Western Regional Rube Goldberg Competition, with high hopes of proceeding to the national finals at Purdue University.

The western regional competition, which is hosted by the UA chapter of the Theta Tau professional engineering fraternity, takes place Feb. 25 in Crowder Hall on the UA campus from noon to 3 p.m. The national final is Mar. 31.

The finals have become something of a media phenomenon in recent years, attracting worldwide media attention and featuring on television shows such as "Late Night with David Letterman" and "The Tonight Show," as well as NBC's "The Today Show."

Just a Hint of the Contraption in Action

Rube Goldberg (1883-1970) was a Pulitzer-Prize-winning cartoonist, inventor and engineer whose comical inventions still influence popular culture. Movies such as "Back to the Future" and "Brazil" feature Rube Goldberg machines, and Goldberg's inventions also inspired games such as Mousetrap.

The UA Rube Goldberg team's bathroom contraption takes 20 steps to complete the balloon-bursting task. "We have a low number of steps but they are all awesome," said Chris Cantoni, the club's president and a materials science and engineering junior. A Rube Goldberg machine built by Purdue students holds the world record for number of steps taken to complete a trivial task: 244.

The team chose the bathroom design -- complete with rubber duck, rat, spider, mousetraps, and golf-ball-spewing toilet bowl -- because they wanted a machine that looked ordinary at first glance. "We wanted something that looks normal and then turns chaotic at the flip of a switch," Cantoni said. "Our machine is very visual and showy."

The regional competition, which features four teams this year, is still growing, said electrical engineering freshman and club vice-president Alberto Martin. "If we win we hope to spark more interest in the competition throughout the region and make it a bigger event," he said.

The contraptions will be judged by engineers from industry according to guidelines provided by the national Rube Goldberg organization. Teams and machines are judged on criteria such as team chemistry, adherence to the Rube Goldberg spirit, and, of course, how well the machine works on the day.

"The bottom line is designing systems that are reliable," Cantoni said. Although engineering know-how is essential, a limited budget forced the UA club to be highly creative in sourcing machine components. "We got parts from yard sales, and we've used a lot of found and donated materials," Cantoni said.

Cantoni found the toilet on campus and had to convince a few friends to help him carry it back to the club's shop in Civil Engineering. "It was gross," he said. After much scrubbing and bleaching, the bowl now sparkles like new and is fit for competition.

Despite the intricacy of the machine and the hours of engineering design the team has put in, and despite the fact that engineering educators across the nation use Rube Goldberg machines as teaching tools, a few critics take the snobbish view that such machines are mere toys, not true engineering projects.

UA club members bristle at this view and are quick to point out that Rube Goldberg projects are ideal for practicing engineering basics and learning how to function as a team. "I learned a lot of fundamentals of electrical engineering while designing the wiring circuitry," Cantoni said.

Club member Lamec Fletez, a computer science major taking a minor in electrical and computer engineering, agrees. "Learning how to work in a team is important," Fletez said. "Sometimes you need to know when to give up your idea for a better one."

Regardless of whether the Rube Goldberg club's haunted bathroom unseats Janet Leigh's performance as the world's best-known shower scene, the competition will still be a scream.