By
UA College of Engineering Staff
Time to read
1 minute
Print
a- a+
Read so far
Tech Launch Arizona recognizes the creators of hand-held sensors to detect contaminants and an app to ease traffic congestion. 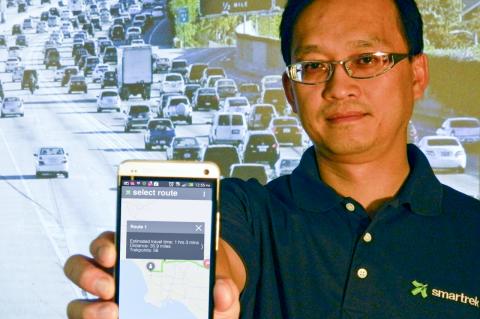 “This is a great moment for us to recognize those who are applying knowledge to today’s major challenges and questions and giving voice to the importance of moving that knowledge out into the world,” said UA President Ann Weaver Hart, who presented eight awards to UA researchers and two to UA alumni on April 30 at Tech Launch Arizona’s second annual awards event, the I-Squared Awards for Innovation and Impact.

Powers, the Thomas R. Brown Distinguished Chair in Bioengineering, has developed hand-held sensors to detect contaminants and bioterrorism agents, technology to rapidly test for bacteria in water, and disposable blood tests for diseases such as HIV, malaria and TB.

Powers is also known for her work with organizations supporting diversity among engineering students, faculty and professionals.

“Linda Powers is one of the most giving faculty we have,” said Jeff Goldberg, dean of the College of Engineering. “She has done an incredible amount of work to bring diversity to our faculty and student body.”

Chiu founded the startup company Metropia Inc. to market his mobile app, which uses advanced traffic prediction and vehicle routing technology, combined with user rewards, to help drivers choose the best routes for easing traffic congestion. The company has released the app in Austin, Texas, and Tucson, Arizona, and is in talks to add more cities to its roster.

“This app has the ability to change the way we move around the city, and it is done 100 percent here at the University,” Goldberg said. “It’s a beautiful, clever idea of linking technology and sociology.”

With its I-Squared Awards, Tech Launch Arizona -- the arm of the University that helps move inventions, technologies and intellectual property from the laboratory to the marketplace -- honors researchers whose hard work and persistence have advanced technology to the benefit of society.