By
Jill Goetz
Time to read
3 minutes
Print
a- a+
Read so far
Cybersecurity researchers in the UA College of Engineering are developing ways to make the airwaves more secure and protect wireless customers from eavesdropping. 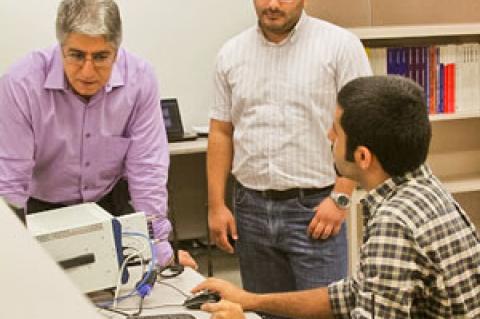 You’d think everyone using a wireless device would be on high alert.

“People working on their laptops think ‘I am safe. I established a VPN. I have a password. I’m using encryption,’” said Marwan Krunz, UA College of Engineering professor of electrical and computer engineering. “Well guess what: Very often, they’re not.”

Krunz is the principal investigator on a new research project aimed at developing software and other techniques to protect everyday users of wireless technology from the under-recognized but very real threat of eavesdropping.

In the four-year, $660,000 project funded by the National Science Foundation Secure & Trustworthy Cyberspace program, Krunz and co-PI Loukas Lazos, associate professor of electrical and computer engineering, are expanding their earlier studies of eavesdropping on military and industrial wireless networks.

The Problem with Wireless

Wireless transmissions are highly vulnerable to eavesdropping because they typically broadcast in all directions. Anyone within range of a transmitting device, with the right equipment and know-how, can tune in and gather information about the person using it. It’s possible even when people use personal passwords, firewalls, encryption, and virtual private networks, or VPNs, which let them create a secure connection to another network (such as an employer’s company intranet) from a remote location.

That’s because every Wi-Fi user has a unique signature, or fingerprint, which is essentially a pattern of the person’s activity and behavior online.

Wi-Fi communications are transmitted in packets of data containing an identifying header followed by content. Encryption can prevent unauthorized parties from accessing the content and part of the header directly. But with commercially available radio hardware, eavesdroppers can intercept the packet transmissions and capture their attributes -- for example, packet size, duration and radio frequency -- then analyze and correlate the attributes to identify a user’s transmission signature.

Transmission signatures provide telling contextual information about Wi-Fi users, such as which websites they’re visiting, and can even disclose a user’s physical location.

Armed with transmission signatures, eavesdroppers can do more than passively learn about a user. By disguising their own identities, for example, they can capture and steal a user’s personal information. Sometimes their job is easier, because certain wireless networks and devices, such as programmable pacemakers, cannot function properly with encryption and do not use it.

“Transmission signatures present a huge threat to security in wireless communications,” Krunz said. “In five seconds of eavesdropping on encrypted Wi-Fi traffic, eavesdroppers can achieve 80 percent accuracy in guessing what websites users are visiting and which applications they are running.”

These include new forms of transmitter/receiver “friendly jamming” -- artificial noise injected into a wireless transmission that authorized parties can understand and ignore but which thwarts would-be eavesdroppers; and beamforming, which enables a device to pinpoint where its signal can be received, preventing it from being captured elsewhere.

This research will ultimately yield software that can be installed during the production of laptop and tablet computers, cell phones and other wireless devices. Consumers may also be able to download the software to their current devices from wireless cards.

"This is a very new area of study," Krunz said. “We really don’t fully understand the kind and extent of harm that is possible through leakage of transmission signatures.”

At the benign end, eavesdroppers might discover users’ personal preferences and send spam. But with the right equipment and expertise, they might also steal emails, instant messages and passwords, or jam visits to particular websites.

"We don’t know what we don’t know," Krunz said. "Many vulnerabilities that permit leakage of important features of our wireless transmissions and facilitate subsequent attacks have yet to be discovered. Wi-Fi users can’t protect themselves if they don’t know about eavesdropping and its risks."

Until users of wireless technology have ready access to privacy-preserving products like those Krunz’s team is developing, there are steps they can take to be a little more secure, he said.

For example: Create long passwords that are hard to guess, and change them often. Use VPNs, which have limitations but are at least a start. And when using a wireless device in a public place, where most eavesdropping occurs, think twice about what you do and post online.

As co-PI Loukas Lazos observed, "It is up to consumers to recognize their vulnerability and demand better security for wireless products. It is up to product developers to demonstrate to customers that they are protected. And it is up to us, the engineers, to create the technologies that protect them."