By
Jill Goetz
Time to read
3 minutes
Print
a- a+
Read so far
With Department of Defense funding and student researchers that include a decorated Army pilot, Jesse Little studies plasma’s potential to transform aerospace testing and technologies.

Plasma has generated excitement among aerodynamics researchers for its effects on air flow and its potential for building more agile and fuel-efficient flying machines, ranging from planes, helicopters and drones to rockets and satellites. 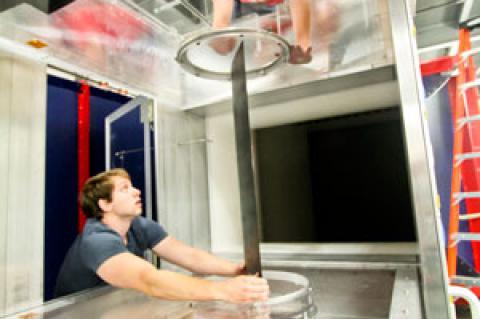 Now a rising star in aerodynamics at the University of Arizona College of Engineering is putting plasma’s promise to the test.

Assistant professor of aerospace and mechanical engineering Jesse Little received a $245,000 grant in June 2015 for a project titled “Interaction of three-dimensional unsteady flows with aerodynamic surfaces” from the Defense University Research Instrumentation Program. DURIP is a collaboration of the U.S. Army, Navy and Air Force research divisions.

“These awards are evidence of Jesse’s significant contributions to this important research focus,” said Jeff Jacobs, head of UA aerospace and mechanical engineering.

Little directs the UA Turbulence and Flow Control Laboratory, where he studies what causes turbulence, how it behaves and how it can be controlled. Turbulent flow is inherently chaotic -- think of water crashing at the bottom of a waterfall -- and filled with vortices and eddies that scientists are only just beginning to understand.

“As more airplanes, helicopters and drones fly at lower altitude and in urban areas -- where air tends to be more unsteady than, say, at 40,000 feet -- it becomes even more important to understand turbulent air flows and how they interact with solid surfaces,” Little said.

Little is one of many researchers around the globe using active flow control, a technology pioneered by UA aerospace and mechanical engineering professor Israel Wygnanski who, with engineers from Caltech, Boeing and NASA, designed a smaller, lighter airplane tail using sweeping-jet actuators, which emit tiny bursts of air to disrupt and control air flow.

Little’s actuators use high voltage to ionize air, producing plasma. Plasma, or ionized gas, is believed to be the most abundant state of matter in the universe. It produces thermal energy for some of nature’s most spectacular displays: lightning and stars, for example, which can exceed 50,000 degrees Fahrenheit. The thermal energy from a plasma discharge can interrupt and control air flows to an extraordinary degree -- even dissipate shock waves, which has prompted aerodynamics researchers to write of “plasma magic” in their papers.

In one example of turbulence, air flows can separate from a surface. This puts considerable drag on an airborne object and reduces its lift. Plasma’s thermal bursts can reattach these separated flows at the precise spot they originated. This means plasma can reduce drag on an aircraft and prevent it from stalling.

Putting Plasma to the Test

Little and students working in his lab use power generators to ionize air particles that are exposed to strips of copper tape. The copper strips act as electrodes, conducting high-voltage electricity to actuate the plasma floating above them.

Actuators in hand, the researchers climb into the aerospace and mechanical engineering department’s subsonic wind tunnel to attach them along with strips of dielectric, or insulating, tape, at precise locations on the airfoil, a cross-section of a wing.

Back outside, with the press of a button, they turn on the actuators, which emit nanosecond pulses of plasma over the airfoil’s surface. The team takes precise measurements and conducts computer analyses of how these plasma “hot spots” affect air flow at specific locations on the airfoil, particularly the leading edge.

Little’s findings will help engineers design plasma actuators that can be attached, perhaps in sheets, to an airplane wing or helicopter rotor blade. These lightweight electronic flow control devices could shrink or even replace much heavier airplane control surfaces, such as wing flaps and tails, reducing the plane’s weight and enabling it to fly farther on less fuel. The plasma actuators also have potential to revolutionize aspects of wind tunnel testing, allowing researchers to perform experiments currently limited to expensive flight tests.

Plasma actuators could improve efficiency inside planes, too.

“Industry faces ever greater pressure to improve combustion efficiency, reduce pollutant emissions and make ignition and combustion processes more reliable. We know that plasma discharges can enhance fuel-air reactivity and reduce exhaust. Plasma actuators could lead to much cleaner engines, not just in aviation, but in many industries.”

A high school intern and undergraduate student -- funded by 2015 Army Research Office apprenticeship grants -- and an Army captain pursuing his master’s degree are among the students working on the project with Jesse Little.

“I have wanted to be an aerospace engineer since I was in the fourth grade,” said Zachary Wellington, who graduated from Sonoran Science Academy in May and is starting his first year as a UA Engineering student.

For Timothy Ashcraft, a helicopter pilot whose military honors include the Bronze Star, the project hits close to home.

In August 2010, Ashcraft was co-piloting an Apache helicopter in Afghanistan when it was shot down. Both pilots survived.

Ashcraft is pursuing his UA master’s degree in aerospace and mechanical engineering with funding from the Army. After he graduates from UA, he will teach engineering at the U.S. Military Academy at West Point, where he received his bachelor’s degree in 2007.

“I survived for two reasons,” he said: “The exceptional skill of the pilot-in command and the engineers who built and designed the aircraft to withstand severe battle damage. I hope I can give back to the field of aerospace engineering, because it literally saved my life.”