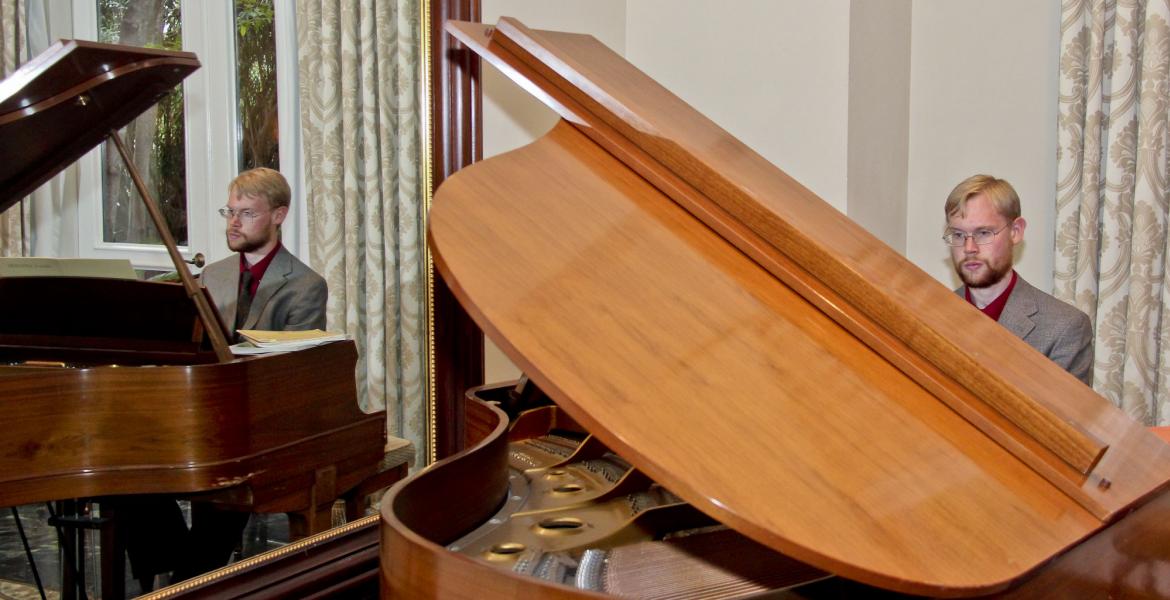 Jonathan Gross, who is majoring in computer engineering and piano performance, gives a performance at the Arizona Inn in Tucson, Ariz., during a UA College of Engineering scholarship reception.

By
Pete Brown
Time to read
2 minutes
Print
a- a+
Read so far
Top-ranked student combines love of music and quest for quantum understanding.

Jonathan Gross, who graduates this year with degrees in computer engineering and piano performance, has been named a 2011 laureate by national engineering honor society Tau Beta Pi.

Gross was cited by Tau Beta Pi for his achievements in the arts, and will receive a $2,500 cash award and plaque Oct. 29 at the Tau Beta Pi Association's 106th annual convention in Indianapolis. The association defines laureates as exemplars of "the spirit of liberal culture in engineering colleges."

Gross described his award as a tremendous honor. "I am humbled to have been chosen for this award, and will strive to conduct my life in a manner worthy of such an honor," Gross said.

He also noted that the cash element of the award was well received. "I have been very fortunate during my time as a student regarding scholarships, but many are only designed to fit the standard four-year student," he said. "Since pursuing computer engineering and piano performance together puts me on a longer track, it is nice to receive some extra financial assistance as a result of my work in both fields."

Jeff Goldberg, dean of the College of Engineering, commended Gross. "He carries a 4.0 GPA and is ranked first in a graduating class of over 450," Goldberg said. "Jonathan is the first student in 25 years to simultaneously finish an engineering degree and a piano performance degree. The achievement shows focus, determination and the passion that Jonathan has for his love of music and knowledge. He is simply an extraordinarily talented student."

Referring to the UA Engineering Tau Beta Pi laureates before him, Gross said, "UA Engineering has helped me along my path so far in many ways, so it seems fitting that so many members of Tau Beta Pi at the University of Arizona should be named laureates in a relatively short time. I am especially grateful for the personal care, attention, and opportunities to excel I have received serving as an Engineering Ambassador under [UA Engineering Academic Affairs staff] Susie Bowers and Rebecca Myren."

While pursuing his degrees, Gross performed and accompanied at many musical venues, including the UA Chamber Music Ensemble and numerous donor and scholarship receptions. He was awarded a Brown Family Foundation Scholarship, which are given annually to the College of Engineering's top five incoming freshmen who also are National Merit Award winners.

Since coming to the UA, Gross has also taken part in numerous outreach activities. He is an Engineering Ambassador, one of a group of about 50 students who volunteer their time to connect with K-12 students to introduce them to engineering. "He is poised, confident, and can convey complex engineering topics in simple terms," Goldberg said. Gross is also president of the UA chapter of Intervarsity Christian Fellowship.

After he graduates, Gross is aiming for a physics-related doctoral degree in the field of quantum information. "I am pursuing many different avenues to arrive at this goal," he said, "but would be especially excited to receive funding to study at a foreign university."