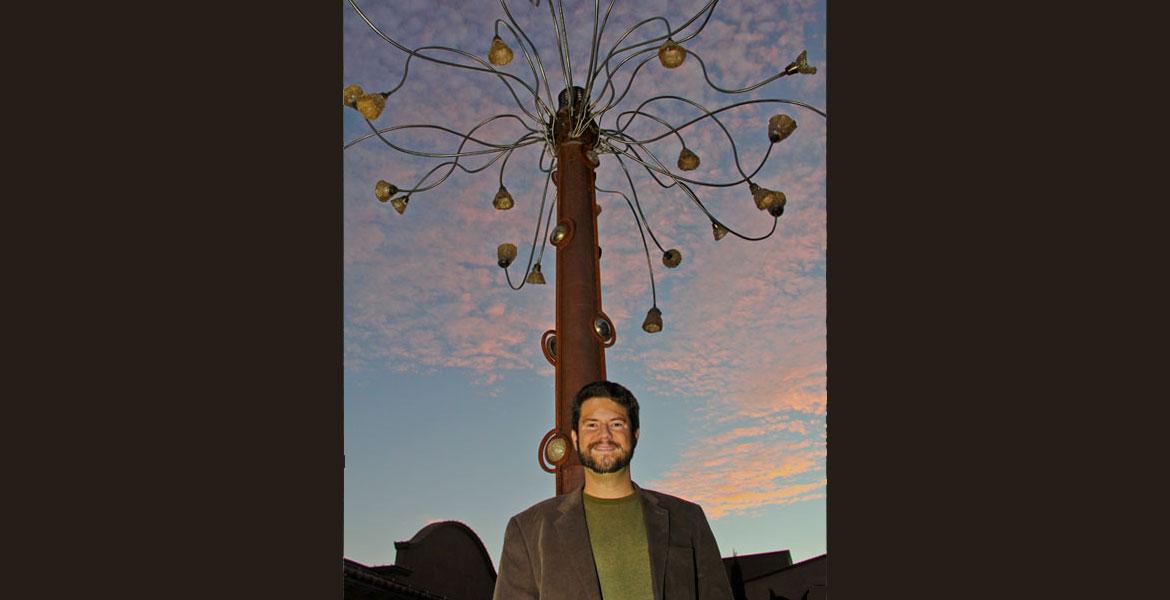 By
Pete Brown
Time to read
2 minutes
Print
a- a+
Read so far
While completing his PhD, he helped grow one of Arizona's leading solar companies and launched a major arts effort, and is now ready to add his critical thinking skills and focus to make Arizona better.

Patrick Marcus, an alumnus of the University of Arizona College of Engineering, has been selected as a future civic leader in the state of Arizona.

Marcus graduated from UA in 2006 with a doctorate in biomedical engineering, with a minor in neurosciences. He also got his bachelor's in electrical engineering from UA, and is a graduate of the Eller College McGuire Center for Entrepreneurship.

He is currently vice president of engineering at Tucson-based MC Power Systems, which he recently spun off from parent company General Plasma, which is also based in Tucson. MC Power Systems designs plasma power supplies for the solar, architectural glass, and liquid crystal display industries.

"I grew up here, and Tucson and the UA are very dear to me," Marcus said. "I'd love to contribute and make a difference to Arizona's future."

Marcus is well aware that his civic fellowship will make him visible on the statewide political radar. "Hopefully, this political exposure will enable me to provide the often overlooked perspective from the trenches," Marcus said. "In this way, I can keep scientists, engineers and small technology business owners at the top of the Arizona agenda for jobs, start-ups and life-enhancing R&D."

Marcus already has some experience in the public policy arena, in that he has worked with Congresswoman Gabriel Giffords' office to promote solar energy. He has also participated in a solar round-table discussion with Giffords that included Tucson Mayor Bob Walkup, Tucson Electric Power CEO Paul Bonavia, and Tucson International Airport CEO Bonnie Allin.

Kathleen Perkins, chair of the UA BIO5 Institute's business advisory board, has no doubt that Marcus can make a heavyweight contribution to Arizona's business and technology future. "Patrick is impressive," Perkins said. "While completing his PhD he helped grow one of Arizona's leading solar companies, got married, and launched a major arts effort, and is now ready to roll up his sleeves and add his critical thinking skills and his focus to make Arizona better."

As a fellow at the Flinn-Brown Civic Leadership Academy, Marcus will start with 12 days of intensive training in Arizona state government and public policy. Topics covered will include water, energy, environment, education, and job creation.

"Lots of networking" is how Marcus anticipates his role as civic fellow will play out. "Though I'm an engineer at heart, I've learned how to run a business, which has given me a feel for how different groups interact," he said. "Business people, politicians and engineers see things differently, and I can help them speak the same language."

Public installations include Skyburst 2 at Plaza Colonial in Tucson, Ariz. As people approach Skyburst, a motion detector sets off rapidly flashing light-emitting diodes to grab their attention. Marcus designed and built the electronics and wrote the computer program that operates the motion detector and controls the LEDs. Fairfield came up with the original concept and built the physical structure.

Marcus has incorporated his neuroscience expertise into the light sculptures, in the form of psychophysical algorithms that conserve energy while creating the intense optical effects.

"It has actually been a pretty exciting month," Marcus said. "In addition to being selected as a civic fellow, my art partner and I received two sculpture commissions: one for the Glendale Jazz and Blues festival and another for a big river underpass project in Green Bay."