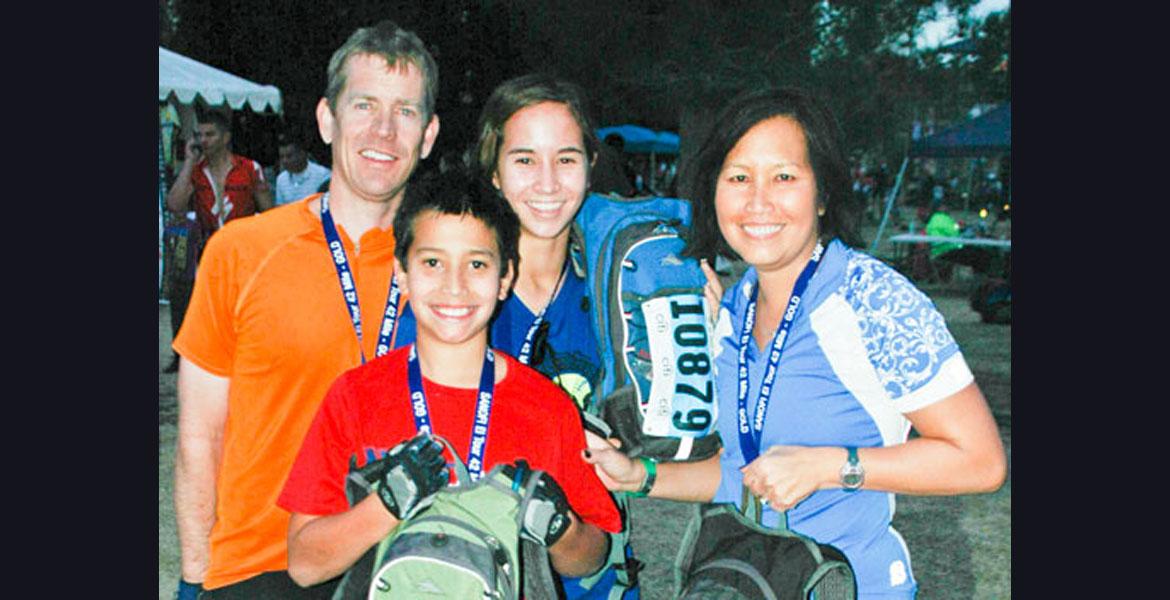 When couples approach their 20th wedding anniversary, guys can spend a lot of time searching for that special gift, tracking down the perfect pearl necklace or dramatic diamond bracelet.

For Jim Todsen, it wasn't that difficult. He just gave his wife, Ae, one of his kidneys.

Jim, who graduated from UA in 1992 with a master's in electrical engineering, had hoped the transplant operation could be scheduled for their anniversary on June 1 because "I thought I could get out of shopping for a gift," he joked.

The transplant missed their anniversary by one day, but Ae, who graduated from UA with a law degree in 1992, smiled and said it was close enough to count.

The couple met on the first day of their freshman English class at Iowa State University in 1985 -- the only class they would have in common. After graduation, Ae headed to UA to study law, and Jim worked in Phoenix. They were married in 1991 under the Campanile, the landmark structure on Iowa State's campus, and then continued at UA.

After graduating in 1992, Ae went to work in the city attorney's office and Jim started with Burr-Brown, which was acquired later by Texas Instruments. He's now the director of advanced development for the company's precision data converter unit.

Their lives were running smoothly until late in 2008 when Ae was diagnosed with multiple myeloma, a blood cancer in the same family as leukemia and lymphoma. She underwent chemotherapy and a stem-cell transplant with cells taken from her body. The cancer treatment was successful, but the disease damaged her kidneys, and she eventually had to go on dialysis.

"Everything was out of whack," Jim said. "The dialysis was treating one thing, and they give you drugs to treat another thing, and, I mean, it's just a series of drugs and Band-Aiding things together." So in the summer of 2010, they started on the path to a transplant.

Jim was tested and found compatible, which meant he could donate a kidney directly to Ae. If that hadn't happened, he could have traded kidneys in a kind of round-robin arrangement. "We met several husband-and-wife teams where the spouse had donated a kidney and it had gone to someone else, and through the chain another kidney had come back to their spouse," Jim said.

"The day of the surgery, I got to see her at night, and it was just like a switch had flipped," Jim said. "Her color had come back. The turnaround was instantaneous."

"I was lucky," Ae added. "It's not always the case. That was the best possible outcome. The kidney started working while I was still on the operating table."

The next step was to regain the active lifestyle that had slipped away during 2½ years of illness. Before 2008, the Todsens and their two children took vacations filled with skiing, hiking, camping and other activities.

During her illness, "I felt weaker and weaker to the point where I could barely walk around our cul-de-sac," Ae remembered. After the transplant it took several weeks to regain enough strength to walk a mile.

Although the operation was only slightly more traumatic than having his appendix removed, Jim also needed to regain his stamina. "So as we were recovering last summer we decided to set a goal of riding the 42-mile part of El Tour," Jim said. He was referring to El Tour de Tucson, an annual bicycle charity event that attracts more than 9,000 cyclists.

The Todsens, their son, 12, and daughter, 15, started training by riding along the Rillito River Parkway and in Sabino Canyon.

It wasn't easy at first. Ae's first ride was only two miles long. "The first long ride I remember was six miles," she said. "I was so out of shape, I couldn't walk for a week. I thought there was no way I could do a 10-mile ride." This was difficult for someone who earlier in life had ridden her bicycle across Iowa in the annual RAGBRAI event and across Minnesota and Wisconsin on church-sponsored rides.

But by El Tour time, four months later, the family was taking 30-mile rides and ready to challenge the tour. Ae said her children were great on the training rides. When she was getting tired, they would encourage her. If they felt Dad was going too fast for Mom, they'd urge him to slow down.

On the day of the tour, all four crossed the finish line together -- after five flat tires along the way. Jim blamed himself for not replacing the worn rear tire on his daughter's bike before the event. But with the help of friends and race volunteers, they made it.

"I told the kids that the flats kind of fit in with the theme of this whole effort -- perseverance," Jim said.

"Now we just have to figure out what comes next," he added. "I'm lobbying for the 60-mile El Tour ride next year. That will give us something to shoot for."

Ae thinks that's a good goal, and "I think it might be fun to do a bike ride in Europe or something like that."

Both options sound a lot better than the past couple of years. "This is the first time in a long time that things are in really good shape," Jim said. "We were battling one thing and then another thing. It's been kind of a couple of crazy years."

Ultimately, the transplant made all the difference. If the opportunity arises to help someone close to you, Jim encourages people to think seriously about donating. "There are a lot of people waiting for kidney transplants," he said. "Statistically speaking, people who donate kidneys are at no greater risk of having problems and their life expectancy is just as good as someone who has both. It can just transform someone's life."

Ae agrees. On their 20th anniversary, "It really was the gift of life."