By
Martha Retallick
Time to read
3 minutes
Print
a- a+
Read so far
The SRC Engineering Research Center for Environmentally Benign Semiconductor Manufacturing is developing greener, more cost-effective solutions for a booming industry.

They’re also thirsty. Those 6-inch wafer plants consume more than 2 million gallons of water each day. Newer facilities that produce 8-inch and 12-inch wafers consume even more, with some daily estimates as high as 3 million gallons.

Then there’s the waste problem. And clean doesn’t come cheap.

Manufacturers have responded to environmental hazards by closely monitoring chemical use, minimizing consumption and developing recycling and reprocessing techniques. While many of the chemicals used in semiconductor production aren’t expensive, keeping the process ultraclean is.

At the University of Arizona an interdisciplinary team of researchers from several universities is studying these problems and finding solutions, as part of the SRC Engineering Research Center for Environmentally Benign Semiconductor Manufacturing, or ERC. The center, named for its primary funding source, the Semiconductor Research Corporation, or SRC, is developing safe, sustainable materials and processes for semiconductor manufacturing and studying nano-scale manufacturing solutions.

Farhang Shadman, UA Regents’ Professor in chemical and environmental engineering, is the ERC’s founding director. Since its inception in 1996, the center’s work has involved 21 universities, 241 doctoral and master’s students, 216 undergraduate students, 13 academic disciplines and 35 industrial members. ERC member companies include Hewlett-Packard Co., IBM, Intel Corp. and Texas Instruments. More than 80 percent of ERC graduates have joined these semiconductor-related companies and other industry leaders.

A decade ago, no one would have predicted the popularity of mobile tablets. That’s because they weren’t available then.

Likewise, the smartphone. Ten years ago, mobile phones were for making calls and little else.

Both of these semiconductor-intensive devices point to one of the opportunities -- and challenges -– facing the industry. It’s fast-moving, and the pace of innovation shows no signs of slowing.

That’s why the ERC balances high-risk, high-payoff projects with smaller efforts that have more immediate applications. The center aims to get its research into commercial use as quickly as possible. 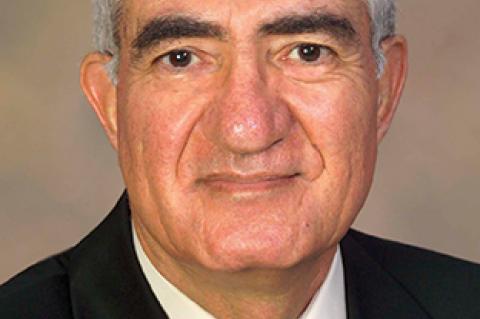 “New materials bring with them new environmental, safety and health issues. And these new materials need to be studied.” --Farhang Shadman, Regents’ Professor in chemical and environmental engineering and ERC founding director

For example, since its founding, the ERC has been working on perfluoro compound alternatives, and several chemistries developed in the program have been adopted by industry. Additionally, the transfer of UA-developed reactive filter technology to the Pall Corp. led to the commercialization of the Pall part per trillion filter-purifier only three years after research began.

ERC research has created new businesses as well. The Environmental Metrology Corp. arose out of water use reduction technology that was developed and patented by the ERC. The company’s Electro-Chemical Residue Sensor was a Semiconductor International Editors’ Choice Best Product Award Winner in 2009. And the GVD Corp. was formed to commercialize low-energy solvent-free deposition technology. ERC research also led to the founding of Araca Inc., Cambridge Metrology Inc. and  Picogen Inc.

Silicon Valley Won’t Have to Change Its Name -- Yet

Back in 1965, Intel co-founder Gordon Moore predicted the number of transistors on a silicon chip would double every two years. Time for an update.

The doubling period is closer to 18 months, and a limit will eventually be reached with silicon, Shadman said. Although silicon is still the main substrate in semiconductor manufacturing, new materials are coming to the fore, which makes the ERC’s work even more important.

“New materials bring with them new environmental, safety and health issues,” said Shadman. Regents’ Professor in chemical and environmental engineering and ERC founding director.  “And these new materials need to be studied.”

“NSF usually funds these centers for nine or 10 years, and very few centers survive past that point,” Shadman said.

Not only has the ERC survived, it brings in about $4 million a year. Each dollar is leveraged with more than $1.70 from elsewhere. While most of the ERC’s funding comes from the SRC, some private funding also comes from its member and affiliate companies, ranging from semiconductor manufacturers to chemical and equipment suppliers.

In addition, since 2001 the SRC Education Alliance has awarded annual memorial Simon Karecki Fellowship Awards to ERC students at member universities who are making important contributions to environmental research. The late Karecki had conducted pioneering work in clean etching processes in semiconductor manufacturing while a student at the Massachusetts Institute of Technology ERC.

For more information about the ERC, contact Karen McClure at kmcclure@erc.arizona.edu.