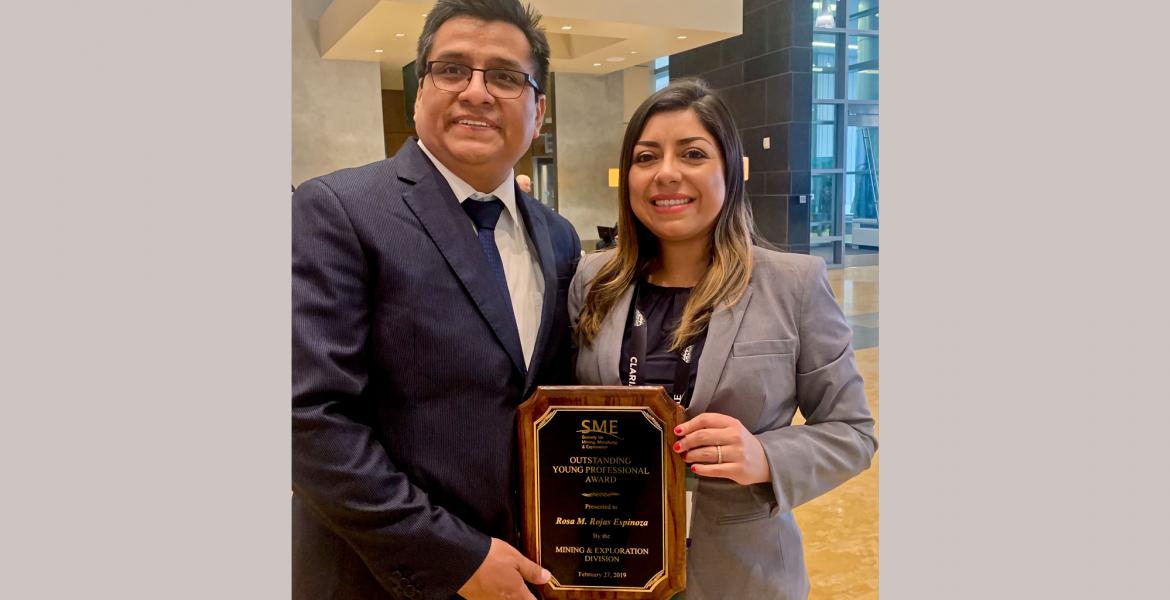 Rosa Maria Rojas, right, who earned her Master of Science in mining engineering in 2013 -- with husband Jose Quispe, who earned his Master of Engineering from the UA in 2010 -- displays her Outstanding Young Professional award from SME.

UA Alumna and Professor Makes Her Mark in Mining

By
Emily Dieckman
Time to read
3 minutes
Print
a- a+
Read so far
Rosa Maria Rojas is first Peruvian recipient of the Outstanding Young Professional award from SME’s mining and exploration division.

Rosa Maria Rojas was studying industrial engineering at Pontifical Catholic University of Peru in Lima when she took an introductory course on mining engineering. She wasn’t a big fan of the industry at the beginning: Barrick Gold, a mining company where her parents worked in accounting and community relations, moved Rojas and her family to a small mining town when she was a teenager. The move to a different part of the country meant a drastic change in lifestyle, and Rojas resented it at the time. The course not only surprised her, but changed the trajectory of her life.

“I took an elective course in mining because I wanted learn more about the subject,” she said. “I fell in love with mining there.”

This month, Rojas, who is now an assistant professor of practice in the Department of Mining and Geological Engineering, or MGE, at the University of Arizona, received the 2018 Outstanding Young Professional award from the mining and exploration division of the Society for Mining, Metallurgy and Exploration, or SME. Rojas is the first Peruvian to win the award, which recognizes the accomplishments of a young person who has made a significant contribution to the minerals industry.

Winning the award places her among the ranks of UA alumni to win the award, including:

Diving In and Working Her Way Up

Pursuing a career in the field wasn’t easy: Rojas’ father didn’t want her to study mining because he thought it was too dangerous a career for women. When she took an internship at the mine site where he worked to prove how much it meant to her, he enlisted all of his friends at the mine to try to talk her out of her chosen career path. Her dad’s friends watched her work, went back to him, and said, “She really wants to pursue mining.”

And so she did. When she started studying mining as a freshman in Lima, there were only two other women in the department, among 200 men. She dived into every opportunity she could, like coming to the United States to attend an SME meeting in 2006. She and her fellow students loved the experience so much that they founded the first SME student chapter in Peru when they got back. Today, there are at least a dozen. She also enjoyed mentoring her fellow students in any capacity she could. This willingness to jump into new opportunities is something she recommends to everyone.

“Don’t exclude yourself because you think you’re different, or because you don’t think you have the same skills as other people,” she said, “Be resilient, don’t give up and give yourself the chance to feel like part of the majority.”

By the time she graduated, there were 14 women in the department. Her first job was as the only female pit supervisor on a crew of 300 men at BHP’s Escondida mine in Chile, where she was also significantly younger than the people she was supervising.

“I always felt part of the whole,” she said. “I never felt like I was different, but I had to work very hard to break that impression that I was not as capable as my male counterparts, because they look at you as young and female. You earn their respect bit by bit.”

Building a Career in Arizona

Rojas spent several years working for BHP Billiton in the mining industry in South America and continuing to mentor the student chapters of SME. After earning her Master of Science in mining engineering at the University of Arizona, specializing in remote mine operation, she spent nearly five years working as a mine engineer for Freeport-McMoRan. She was active in SME during this period, and positions held included vice chair of the Young Leaders Committee and chair of the Young Leaders Professional Development Subcommittee.

Having spent much of her life mentoring others, when the UA recruited for the assistant professor of practice position, Rojas decided it would be a good fit. In 2017, she joined the university as the program manager and lead professor for MGE’s Mining 360 executive program, a nine-unit certificate program designed to help Caterpillar and partner companies’ employees further their education in mining at the UA.

“Having her come in and be focused and run this program is really what we needed,” said John Kemeny, MGE department head. “I think she has a lot of drive, she works very hard and she communicates very well. She has this vision of doing more in our department. We’re really proud of her.”

In 2018, Rojas and MGE doctoral student Fatemah Molaei started researching the effectiveness of diversity policies in the U.S. mining industry with a view to determining where the industry stands on this topic and to creating a baseline for future research. Working with SME, with advice from the Eller College of Management, they surveyed attendees at the SME annual conference in February, collecting data on the perception of whether diversity policies have improved work environments, recruitment, retention and career progression for diverse populations.

“I like the UA very much, because I feel like I’m making a greater impact on the community than I was as an engineer in the mine,” she said. “I can communicate with students and industry, and I have a bigger platform to contribute to research.”

As for her dad, who didn’t want Rojas to study mining at all?