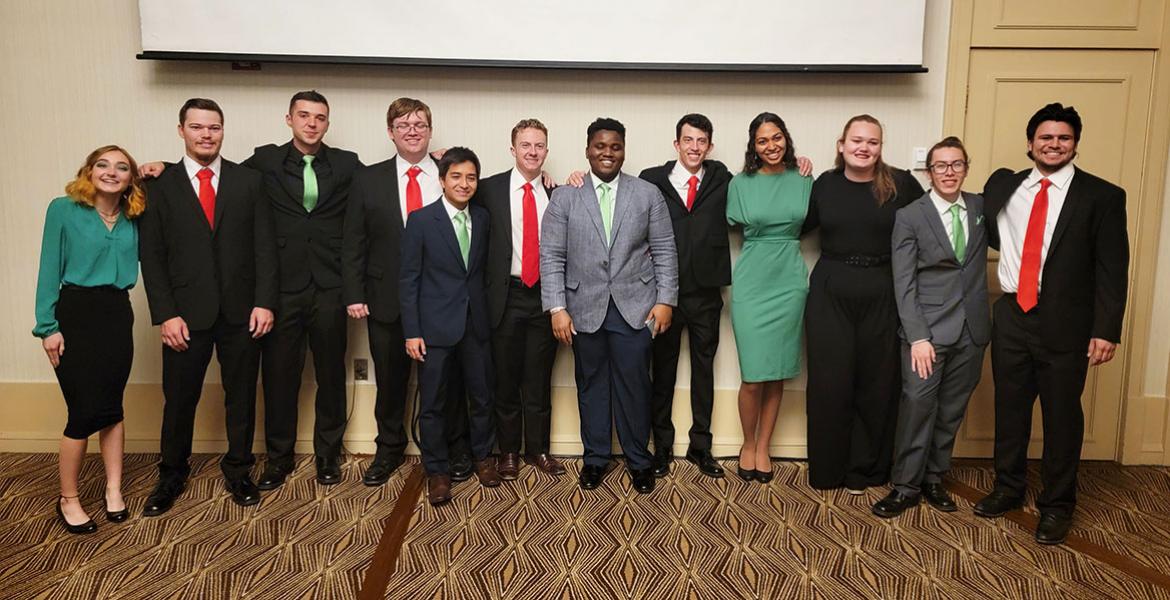 By
Katy Smith
Time to read
2 minutes
Print
a- a+
Read so far
Presentation skills and community focus pay off.

University of Arizona mining and geological engineering teams competing in the 2022 Society for Mining, Metallurgy, and Exploration/National Sand, Stone and Gravel Association's (SME/NSSGA) student design competition placed in the top three for the second year in a row. Seniors in the Department of Mining and Geological Engineering earned second place and a $1,500 prize in the metallic competition, and the juniors placed third in the same real-world test, winning $1,000. A team from the University of Kentucky won first place.

The Metallic Student Design Competition tasked more than 20 teams from around the world with forming mock consulting companies to evaluate a boron and lithium deposit in New Mexico and create process designs. All teams wrote and submitted technical papers in Phase 1 of the project. The top six moved on to Phase 2, presenting their designs in March at SME’s 2022 annual conference and expo, MINEXCHANGE, in Salt Lake City.

The teams had three weeks to complete their papers. During the weekend of the conference, they polished their reports and prepared oral presentations for competition judges.

“Job well done, teams, and well deserved,” said mentor Brad Ross, Professor of Practice in the Department of Mining and Geological Engineering, director of the Geotechnical Center of Excellence in the Lowell Institute of Mineral Resources and interim director of the School of Mining and Mineral Resources. “Both teams represented the department and the university very well – the seniors demonstrated experienced professionalism, and the juniors brought energy and innovation.”

The competition serves as a proving ground for UA College of Engineering juniors, with many moving on to the senior team. Senior and team lead Schuyler Mangiafico, along with a number of his teammates, also competed his junior year.

“It was a good opportunity to make mistakes in a safe environment so I don’t make those mistakes in the workplace,” he said.

Mangiafico’s teammates, who called themselves Los Gatos Consulting Co., were Kate Brown, Tryston Erb, Victor Nieto, Tennyson Wilson and William Yurtinus. They relied on lessons learned from a third-place finish in the 2021 competition, coursework, their internships with mining companies, and one another. Los Gatos, whose members had worked in different areas of mining, participated in the competition for their Interdisciplinary Capstone design project.

“We really took people nearby into account,” said Nickels. ”We wanted to make sure we were stimulating the economy and providing jobs benefiting the region.”

The Stonecrushers’ plan turned the site into a theme park once mining was complete. The former mine was incorporated into the park design for outreach and education.

The team aimed to demonstrate the company’s economic viability and show how technology, such as continuous surface miners, which are machines that cut and gather material simultaneously, could mitigate environmental damage. Competition judges commended the team for the care they took in considering community.