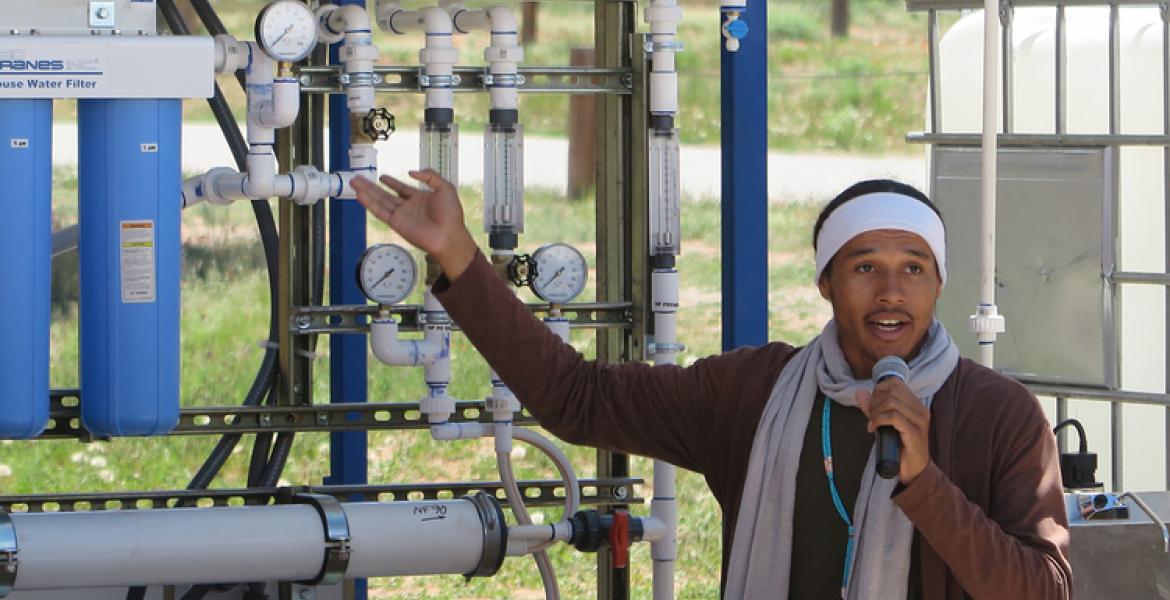 By
Emily Litvack
Time to read
2 minutes
Print
a- a+
Read so far
UA students working on food, energy and water insecurity among Indigenous communities build an off-the-grid water filtration system on the Navajo Nation.

Twelve University of Arizona graduate students, including several from the Department of Electrical and Computer Engineering, have teamed up with undergraduates on the Navajo Nation to design a solar-powered water filtration system that can provide 50 gallons of safe, clean water to 30 Navajo families per day.

The students are part of the first cohort of trainees to participate in a five-year, $3 million National Science Foundation grant that enables an unprecedented collaboration between the UA and Diné College, which serves a predominantly Navajo student population. The goal is to teach the next generation of STEM professionals how to confront food, energy and water challenges among indigenous communities while letting traditional values guide their work.

"We want to enable these trainees to tackle critical, real-world food, energy and water problems with an understanding of culture and sovereignty of indigenous people," said Karletta Chief, associate professor of environmental science in the College of Agriculture and Life Sciences, who is leading the project.

With an area the size of West Virginia, the Navajo Nation is the largest reservation in the United States, but some areas have never been connected to central power and water due to rugged terrain and low population density. Today, the Navajo Nation estimates that of its 357,000 residents, up to 35% don't have running water in the home.

According to the U.S. Environmental Protection Agency, the use of unregulated water sources is the greatest public health risk associated with drinking water for the Navajo Nation. A study published in 2018 by the Navajo Department of Health reported that compared with the non-Hispanic white population in Arizona, Navajos have a higher incidence and mortality of liver, kidney, stomach and gallbladder cancers.

Meanwhile, the Indian Health Service reported that it would cost $200 million to provide access to safe drinking water in all Navajo homes. Without access to such funds, the Indige-FEWSS graduate students -- half of whom are Native American -- and undergraduate students from Diné College have set their sights on a mobile, solar-powered water purification system instead.

Letting traditional Diné culture and ecological knowledge guide the process, the students designed a solar-powered water filtration system that can purify up to 1,500 gallons of water per day, removing nearly 100% of dissolved contaminants such as arsenic and uranium -- well below the concentrations to meet drinking water standards -- without the need to be connected to centralized water or power.

Their $25,000 solar-powered water filtration system largely comprises materials available at a hardware store, including, for example, two 275-gallon caged tote tanks, a few water filters and some PVC pipes. The system's design reflects lifestyles and culture on the reservation: It is mobile for hauling and can be built with readily available products, explained Christopher Yazzie, an environmental engineering graduate student in the Indige-FEWSS program.

"Tó éí ííńá át'é," said Benita Litson, director of Diné College's Land Grant Office. It's Diné for "Water is life," a common refrain on the reservation. "And purification makes it safe and clean."