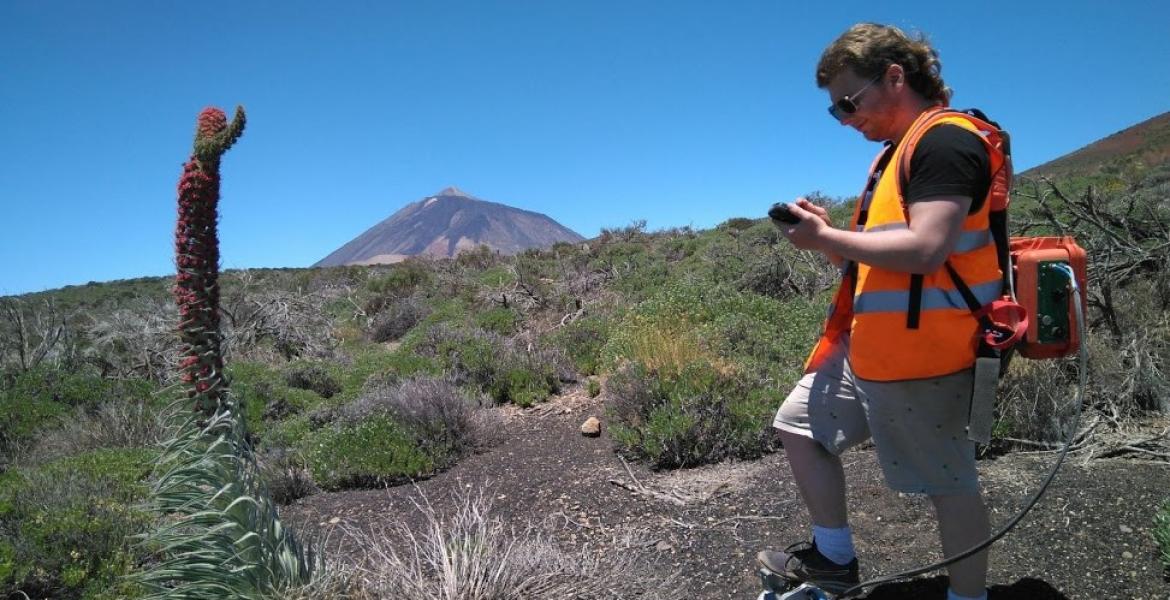 Mitchell Kirshner has always had broad interests. In his four years at Northwestern University, he earned both a BS – triple majoring in the Integrated Science Program, earth and planetary sciences, and integrated engineering studies – and an MS in chemical and biological engineering.

For his Northwestern thesis, he studied the fluid mechanics of ancient lava flows on the Martian volcano Olympus Mons. Scientists study lava tubes, the underground caverns left behind by ancient lava flows, because these tubes can provide clues about the chemical makeup of the planet. Also, they may serve as a form of habitable shelter for potential life. Kirshner contributed to volcano research on our red neighbor by studying the flow rate and chemical composition of Martian lava.

After graduation, he began work as a mechanical fluid systems engineer at submarine manufacturer General Dynamics Electric Boat, while taking systems engineering courses on the side and continuing his volcano research independently. But viewing 3D photos of volcanic activity just didn’t provide enough information. Obviously, hopping on a space shuttle for a day trip to visit the Martian volcanoes wasn’t an option either. So Kirshner started developing a way to view the Martian surface in virtual reality.

“Visualizations can be really helpful for data science applications,” he said. “It gives you more immersion in the data.”

It wasn’t long before he realized he wanted to learn more, and he applied to the Systems and Industrial Engineering PhD program at the University of Arizona.

“The University of Arizona is home to the first department of systems engineering and has great opportunities for working with space systems, both passions of mine,” Kirshner said. “It seemed only natural to move to Tucson once I was accepted to the program.”

Before he arrived at the UA, he spent a month in the Canary Islands, collecting geochemical data to help better predict volcanic activity on Earth. The experience helped him understand how analogous volcanoes might behave on Mars. He joined the University of Arizona in 2018 as a research assistant in the Architecture Driven Systems Laboratory, where he developed VR applications for Space Situational Awareness, or keeping track of objects in Earth’s orbit.

He is currently studying under Professor Ricardo Valerdi, who also has a broad swath of interests, ranging from cost estimation to STEM education for youth. Additionally, Kirshner has worked with Eric Pearce in the UA Department of Astronomy and Steward Observatory on topics including engineering telescope systems, modeling the movement of radiation through Earth's atmosphere, and studying cislunar space – or the area between Earth and the moon.

For his next adventure, Kirshner is interning remotely at NASA Langley Research Center, helping collate data from multiple mission segments. With so many different kinds of engineers and scientists working on space missions, it’s critical to be able to handle the data in one integrated system. But instead of a library of files, documents or images, the system Kirshner is helping to develop will be in VR, allowing scientists to interact with the data in a 3D space.

“This sort of thing has never been done before,” Kirshner said. “Let’s say you have satellite data. In the software prototype I am helping to build, you would be able to not only visualize the 3D motion of that satellite, but to apply algorithms to your data, compute results and visualize them as well. You can even walk right into the middle of your data for a viewpoint that is hard to acquire through traditional 2D visualizations.”

In his internship, he’s focused on analyzing data to predict the magnitude of space weather that can impact Earth. For example, increased solar radiation correlated to sunspot activity can cause errors in GPS navigation on Earth. By manipulating the space weather data in VR, scientists can improve their understanding of solar weather and predict how it may behave in the future.

“Mitchell is an extremely versatile researcher, and he has a broad background combined with specific interests,” said Valerdi, Kirshner’s doctoral adviser. “In particular, his doctoral research on Mars exploration makes him an ideal contributor to NASA’s mission to explore the solar system.”

Kirshner said his work at the University of Arizona in both VR and Space Situational Awareness has served him well so far in in his time at NASA. He hopes it will be beneficial after he completes his PhD as well.

“What I’ve done so far at the UA was exactly what I needed for this specific internship,” he said. “I don’t think I could have been prepared better elsewhere.”