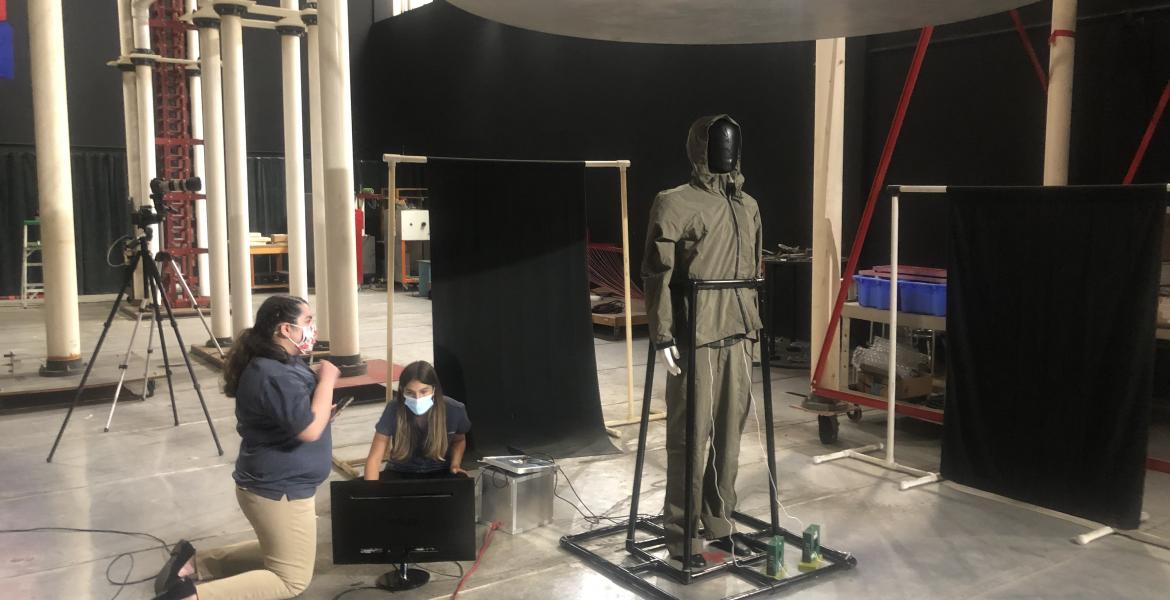 By
Emily Dieckman
Time to read
2 minutes
Print
a- a+
Read so far
As a capstone project, a team of engineering seniors built a mannequin to test the efficacy of lightning protection garments.

Getting struck by lightning is, famously, not very common. But in certain situations, the risk of getting hit is high – and so is the cost. University of Arizona Eller College of Management student David Lyons learned that firsthand when he and two friends were struck by lightning themselves on a hike in 2016. One of them didn’t survive.

So, when he had the opportunity to collaborate with fellow Eller students and a group of engineering students on developing business plan around lightning protection garment technology, he jumped at the opportunity. So did everybody else. Eller team leader Kaissy Yau compares the idea to a seatbelt.

“When you start a car, or when you’re in a car, the chances of you getting in a car accident are extremely low. But you always, always wear your seatbelt anyway,” she said. “And it’s not just hikers. A lot of people don’t realize that when there’s a lightning storm and the power goes out, someone in the PPE industry needs to be out there fixing it.”

The startup was built around a technology developed and patented by Dr. Dan Schlager, an emergency physician and clinical professor at the University of Arizona College of Medicine – Tucson. Schlager sponsored the project through his company, Zoltar Technologies. While the Eller team developed a business strategy for marketing the technology, the engineering students focused on the technology aspect as their capstone project for the Craig M. Berge Engineering Design Program.

The engineering team’s task was to build a mannequin that could test the efficacy of the lightning protection garments. This meant it should emulate the electrical properties of the human body, as well as measure current, temperature and voltage through the heart.

“This project was my No. 1 pick,” said biomedical engineering student Cassidy Mannier. “A lot of the other biomedical projects were kind of similar to the research I do in my lab. This just seemed like something I’d never heard of or experienced. And I wanted to try learning more about electrical engineering and try working more with industry.”

They started by shopping around for the right mannequin, which needed to be roughly the same size as a human and contain as little metal as possible. They chose one, which they dubbed “Manny,” because it was about the height of an adult male. Manny’s joints were made of metal, so the team 3D-printed replacements. Then, they cut a hole in Manny’s back so they could insert his “heart,” a ceramic resistor installed with zip ties.

“The heart is also incredibly important when testing electrical safety, because most deaths caused by lightning are actually due to cardiac arrest,” said Mannier. “Even 0.5 amps can cause cardiac arrest and lead to death.”

To imitate human skin, the body’s major electrical resistance barrier, the team covered Manny head to toe in electrical tape. This provided a total resistance of 40,000 ohms, plus 80,000 ohms of resistance from the tape connecting Manny’s outside skin to his heart. They also built a PVC pipe stand to hold the mannequin up during testing and a metal box to protect the external equipment, such as the data acquisition system and laptop.

Then, they needed to design a way to harvest the data when the mannequin was struck by simulated lightning. Electrical and computer engineering student Katie Daily led this element of the project and learned a new programming language along the way. The user interface the team designed allows testers to select the total number of samples they want to collect, as well as the number of samples per second.

“I haven’t ever programmed in Python before, so I had to learn a new language quickly,” she said. “It was quite the learning experience designing the whole system and understanding how it works and actually programming it.”

In March, the team visited the Lightning Simulation Laboratory at DNB Engineering in Anaheim, California, where they were able to dress Manny up in his protection garments and strike the mannequin with simulated lightning.

“Traveling to the DNB lab was the first time the Eller team met the engineering team, and that was a wonderful connection,” Yau said. “We needed the engineering team’s knowledge and skillset to create that mannequin, and they needed us to do the business side.”