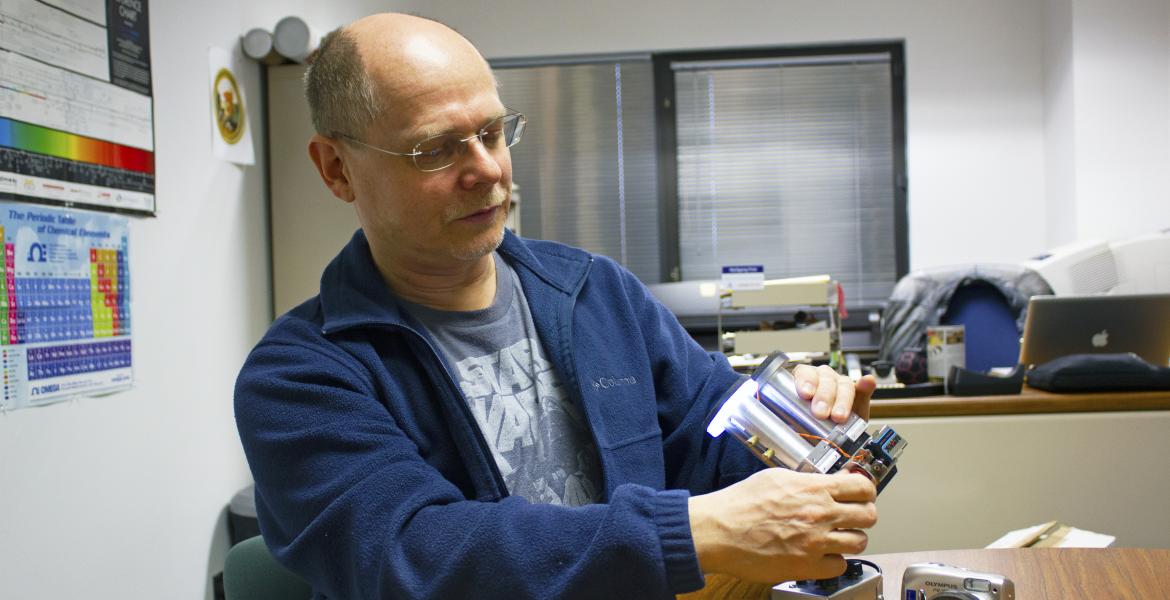 Electrical and computer engineering professor Wolfgang Fink was named a fellow of the Society of Photo-Optical Instrumentation Engineers, or SPIE.

By
Emily Dieckman
Time to read
2 minutes
Print
a- a+
Read so far
Professional optics society recognizes University of Arizona professor for his work in artificial vision for the blind and smartphone-based eye exams and disease diagnostics.

University of Arizona electrical and computer engineering professor and Edward & Maria Keonjian Endowed Chair Wolfgang Fink is one of the newest fellows of the Society of Photo-Optical Instrumentation Engineers, or SPIE.

The organization, with a membership of about 255,000, has selected only 1,500 fellows since 1955. Fink received the designation “for achievements in vision science for the blind and tele-ophthalmic healthcare worldwide.”

“This is extremely rewarding because it’s an international society, and it shows that totally independent people from outside the university and worldwide recognize the work you’re doing,” said Fink, who leads the Visual and Autonomous Exploration Systems Research Laboratory and the Center for Informatics and Telehealth in Medicine at the University of Arizona.

This is Fink’s fifth fellowship. He was named fellow of the American Institute for Medical and Biological Engineering in 2012 and of the Prognostics and Health Management Society in 2018. At the University of Arizona, he was named a 2015 da Vinci Fellow and 2017 fellow of the Arizona Center for Accelerated Biomedical Innovation.

“Wolfgang has a passion for innovations in medical applications,” said ECE department head Tamal Bose. “His work in the area of optical applications in health care makes him deserving of this prestigious award.”

SPIE is an organization for scientists using optics for fields ranging from biomedical imaging to quantum communications, astronomy and national defense. Fink, who has joint appointments in biomedical engineering, ophthalmology and vision science, systems and industrial engineering, and aerospace and mechanical engineering, works in many areas that incorporate optics.

"Wolfgang's groundbreaking work in the field of vision science, including artificial retinas and in improved pressure measurement techniques to monitor glaucoma, is an example of how much impact biomedical engineers can have on human lives,” said BME department head Art Gmitro. “He is well-deserving of this award, and we are proud to call him part of the BME Department."

“I think this sets a nice precedent that we as researchers can actually risk going into interdisciplinary fields and still reach high levels of recognition and excellence,” Fink said. “For example, I’m not a medical doctor, but I don’t have to be one to make contributions in optics to advance health care.”

One of Fink’s recent publications is about a novel way of monitoring pressure in the eye to diagnose and monitor the treatment of glaucoma. The eye disease, which affects 1 in 100 people worldwide and leads to blindness if untreated, is often caused by high intraocular pressure. Clinicians traditionally use external instruments to measure this pressure. Fink’s research, which devises a concept of an implantable sensor to monitor the true pressure inside the eye, represents a paradigm shift in assessing the disease.

“Professor Fink has made outstanding contributions in the field of ophthalmology and vision science, with a particular focus on people with vision loss and the blind,” said Bahram Javidi, a professor of electrical and computer engineering at the University of Connecticut who nominated Fink for the honor. “He has exhibited a prolific output of highly respected quality and innovative research throughout his career as a scientist-engineer that clearly identifies him as a true scholar.”

Fink has also been selected as a SPIE Community Champion “for his outstanding volunteerism with the Society in 2019.” He received a letter of recognition from John Greivenkamp, 2020 SPIE president and University of Arizona optical sciences professor.