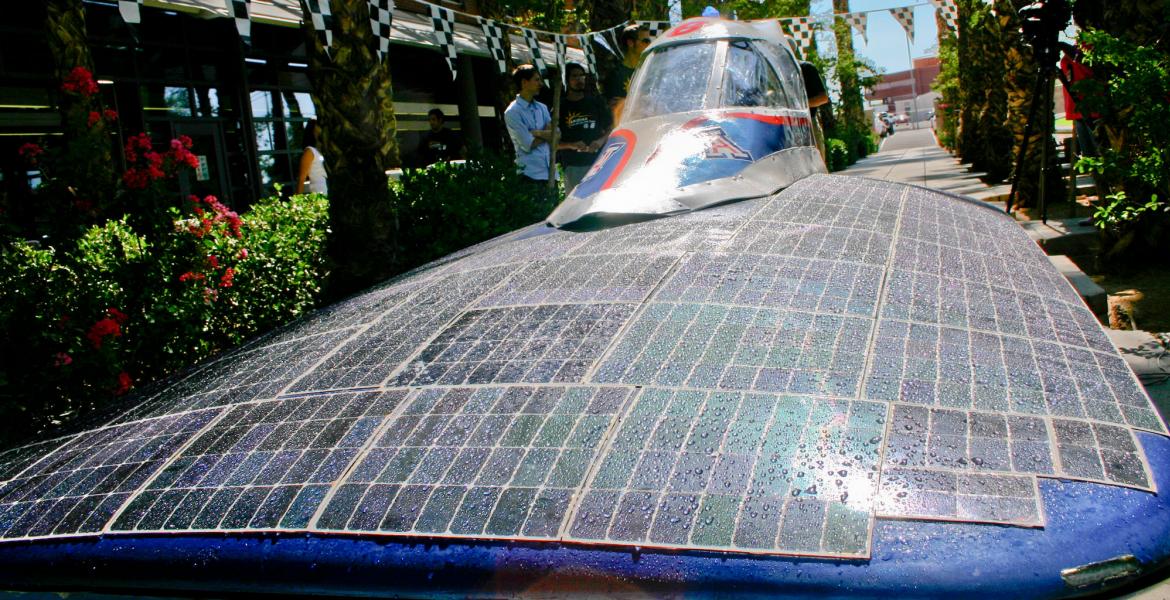 By
Pete Brown
Time to read
7 minutes
Print
a- a+
Read so far
UA Engineering's solar car, and the team that builds and races it, are reborn in North American Solar Challenge.

The University of Arizona solar racing team headed to Texas July 4 for the American Solar Challenge, confident it had overcome problems that scuppered its chances in the 2005 race.

American Solar Challenge is a competition to design, build and race solar-powered cars. Its aims are to promote greater understanding of the benefits and promise solar energy technology, to inspire young people to follow careers in science and engineering, and to enable students and engineers to develop and demonstrate their technical and creative abilities.

In 2005, a combination of rain, wheel misalignment and other gremlins prevented the UA car, Drifter, from completing the minimum number of qualifying laps. The UA team took first place in the stock class in 2001 and 10th in the open class in 2003.

“We’ve done a lot of research and learned a lot about alignment and tire pressure since the last race,” said Harland Goertz, university associate at the Arizona Institute for Solar Energy (AzRISE).

Goertz and his AzRISE colleague Phil Davis were race team advisors for UA’s entry into the American Solar Challenge, which underwent a slight name change to North American Solar Challenge because the race spanned the U.S. and Canada. The 2,400-mile route started in Plano, Texas, and mainly followed U.S. Highway 75 and Canadian Highway 1 to Calgary, Alberta.

In March 2008, the race team consisted of four students plus Goertz and Davis. Drifter was in pieces, funds were short and support had waned. Three months later, Drifter 2.0 was performing to race standards during trials, the crew of 16 was ready to take to the road with a fleet of support vehicles, and the team had the support of AzRISE and the College of Engineering.

Drifter 2.0 is registered with the Arizona Department of Transportation as a convertible, and is the state’s first street-legal solar-powered car.

Goertz also cited community support as an important reason for the team’s race readiness. “The community is fascinated,” he said. “No matter where we go, people are excited that somebody is doing something about solar power.” That community support translated into a local RV company helping prepare the truck and trailer for the journey, and a high-tech battery company pitching in to help iron out some of the power supply problems that bedeviled the original Drifter in 2005.

The team deployed an array of specialists and vehicles for the race. “Our caravan consists of a scout car one mile ahead of a lead car, which can be identified by its flashing yellow light,” said Davis. “Then comes Drifter 2.0, then a chase car that monitors Drifter’s systems by telemetry, and finally, about a mile back, the truck and trailer, which carry spare parts.”

Race organizers strengthened safety requirements in 2008, and Drifter 2.0 featured a new roll cage and five-point harness. Drivers could no longer lie prone and had to wear a crash helmet and sit up so they had greater visibility, which required manufacturing a new driver cockpit—complete with streamlined wildcat ears. “We have made all the necessary modifications to meet these new specs,” said Davis, “and we’re confident that we’ll pass inspection.”

Team confidence was high despite formidable competition from an experienced international field that included the United States, Germany, England and Canada. Davis took the David-versus-Goliath view: “We are going to win this race,” he said. “We have about a quarter-million dollars invested in Drifter. University of Michigan has invested 1.4 million dollars in its vehicle. We’re going to show that the little guy can beat the giant.”

Regardless of who got to the checkered flag first, the North American Solar Challenge made a thought-provoking statement at that time of record-high energy costs: These cars did not consume a single drop of gasoline on their 2,400-mile journey. They were instead powered by energy that will be available for a billion years from a source that is clean, reliable, cheap and sustainable—the sun.

The University of Arizona solar racing team headed to Texas July 4 for the American Solar Challenge, confident it had overcome problems that scuppered its chances in the 2005 race. Nineteen days later, against tremendous odds, the team finished in tenth place.

How It Actually Happened

Selections from the daily race blog:

FRIDAY, JULY 11, 2008
Drifter 2.0 passed the intense scrutiny of Solar Challenge race officials, and is set to conduct qualifying laps today. Only 15 teams from the 24 entrants qualified. Drifter 2.0 was ninth on the starting grid in Plano, Texas. The qualifying run requires that Drifter 2.0 complete 125 miles on a single charge at a minimum average speed of 25 mph. The race will start on Sunday, July 13.

MONDAY, JULY 14, 2008
The UA solar race team completed its first day of racing July 13. Bad weather, however, meant that the cars were running mainly on stored battery power rather than fresh power from the sun. Drifter 2.0 needed a battery module replaced during this first leg of the race, which cost the team 3 hours. UA race team member Wei-Ren Ng described the race as “difficult” but noted that the weeks spent in the lab before the race were paying dividends: “All the long hours in the lab to prepare the electrical system in the car definitely paid off,” he said. “It was one of the first things to pass inspection.”

TUESDAY, JULY 15, 2008
The team finished the first stage of the American Solar Challenge in 12th place July 14. Two of the team’s four qualified drivers shared the driving during the final 180 miles of the first stage, which ended at Neosho, Miss. The second stage of the race starts today at 9 a.m. and spans more than 500 miles from Neosho, Miss., to Sioux Falls, S.D., with checkpoints in Topeka, Kan., and Omaha, Neb.

WEDNESDAY, JULY 16, 2008
At approximately 4 p.m. yesterday, in 12th place, the UA solar race team reached the first checkpoint, Topeka, Kan., on the second leg of the North American Solar Challenge. Following a team meeting, today’s driving strategy will be more aggressive than yesterday’s conservative approach in an attempt to move ahead in the pack behind the leading cars. In fact, the team was so aggressive today that the driver leapt into Drifter 2.0 and sped off without waiting for the pace car to take up its forward position. The pace car driver reacted quickly and eventually jockeyed into position ahead of Drifter 2.0, where it could do its job scouting for problems on the route.

THURSDAY, JULY 17, 2008
The UA solar racing team reached Sioux City, Iowa, yesterday, in 12th place and about 85 miles short of its intended destination, Sioux Falls, S.D. To add to the teams’ woes, weather forecasters are calling for severe storms today, with heavy rain, high winds and hail. Traveling conditions are quite rough for the team. It’s not all steak dinners and cool, comfortable motels. The team reported that they had set up tents and that running water and flush toilets were available. Food is short, however. The last report stated that the only food the team had on hand was a gallon can of beans.

FRIDAY, JULY 18, 2008
Two more teams have dropped out of the American Solar Challenge, reducing the field to 11 entries -- the team is in 11th place. Unexpected road construction and navigational glitches (getting lost) made for a nerve-wracking day of driving yesterday. The UA team plans to reach the checkpoint at Fargo, N.D., today. The 274-mile drive to Fargo should take about 7 hours.

MONDAY, JULY 21, 2008
Still in 11th place and less than 500 miles to go! The UA solar racing team was on the road at 6:30 a.m. today after camping in Indian Head, Saskatchewan, Canada, which is about 30 miles east of Regina, Saskatchewan. Regina marks the beginning of the final stage of the North American Solar Challenge. Storms and gray skies frustrated all the teams Sunday, and many opted to load their cars onto trailers and press forward despite the penalties that such a move incurs.

TUESDAY, JULY 22, 2008
Team member Arshed Al-Obeidi was upbeat about the team’s performance: “Despite a somewhat outdated vehicle design, limited experience and anemic battery pack,” he wrote on the team blog, “we've been able to make it all the way to Alberta. It's on to Calgary, tomorrow.” At 299 miles, the leg from Regina, Saskatchewan, to Medicine Hat, Alberta, was the longest of the race. The team was 25 miles short at the end of yesterday, and still in 11th place. Team member Wei-Ren Ng wrote on the team blog: “Our battery pack could not hold its potential with the extreme terrain going up the Rockies toward Medicine Hat. What was really killing us was not having some sort of balancing circuit and no cruise control.”

WEDNESDAY, JULY 23, 2008
UA Solar Racing Team finishes in 10th place. After holding 11th position for several days, the UA solar racing team managed to overtake its nearest rival, University of Kentucky, and squeeze into 10th place as the finish line approached. The final hours of the race were dogged by bad weather, bad tires and depleted batteries, and the team had to drive over the finish line in the trailer rather than in Drifter 2.0 itself.

THURSDAY, JULY 24, 2008
The North American Solar Challenge award ceremony was held yesterday at the Calgary Zoo. The UA team was awarded the "Cinderella Watch Award" for being late at checkpoints. This was a fun award, not an official one, which demonstrated the camaraderie among teams.

Professor Joe Simmons, co-director of AzRISE, issued a statement of praise and support for the team.

The Arizona Solar Racing Team had been essentially dormant for nearly two years since it did not qualify with the original Drifter due to failing tires. Last fall, under the sponsorship of the Arizona Research Institute for Solar Energy (AzRISE), the team’s two remaining members rebuilt the car and recruited a working racing team to display the solar car at the Pima Association of Governments’ Alternate Energy Expo in partnership with AzRISE. They went on to display the car in response to invitations, including a show at Oro Valley where they met Harland Goertz and Phil Davis, who became the team’s advisors. Both advised the team during the North American Solar Challenge. With funds from AzRISE, donations from the University of Phoenix, invaluable assistance and contributions from Tucson-based Lux Aviation Technologies, and solar cells provided by Tucson Electric Power, the team rebuilt the car's highly sensitive lithium ion battery pack, and reworked the steering mechanism and the driver’s seat and canopy, working day and night during the weeks leading up to the race. The team completed a grueling race from Plano, Texas, to Calgary, Alberta, Canada. A celebration of the team's achievement will take place at UA Sept. 5 and in Phoenix Aug. 8 at the University of Phoenix on Riverpoint Drive. The Arizona Solar Racing Team and its two advisors have overcome countless technical problems and reached an immense milestone by finishing so well in the North American Solar Challenge. AzRISE and the University of Phoenix are planning many demonstration visits by the current car, Drifter 2.0, and will provide support for the development of a new solar racing car for next year. Congratulations team!