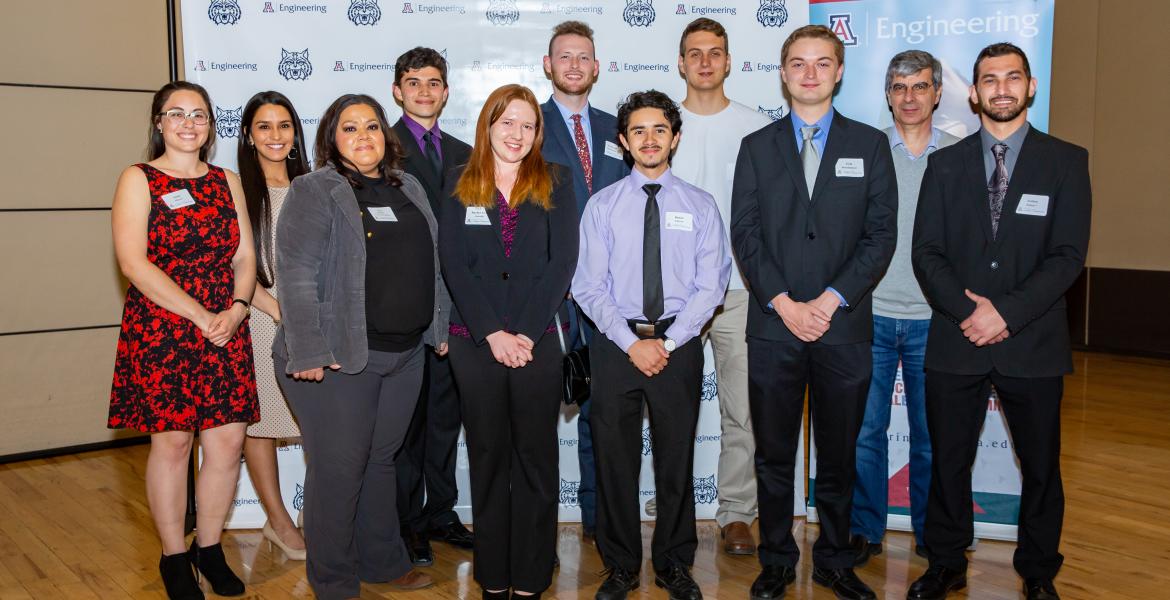 By
Emily Dieckman
Time to read
3 minutes
Print
a- a+
Read so far
Scholars and donors gather to recognize the accomplishments of engineering students and the generosity of the college’s partners.

Michael Marum, a 1976 UA civil engineering alumnus, made it clear in his remarks at the College of Engineering’s annual scholarship reception March 22, 2019, that he believes in the University of Arizona’s capacity for greatness. Maybe someday, he said, UA researchers will discover a cure for cancer, educate a future astronaut or lead a $1 billion voyage to a distant asteroid.

“Wait a minute,” said Marum, who helped to establish the Aileen Primero Memorial Scholarship. “All of these things are happening. Dr. Jennifer Barton is closing in on a very early detection model for cancer cells. This university has produced six astronauts. And at 10 a.m. on Dec. 3 this past year, this university led a NASA spacecraft on a $1 billion mission to arrive at Bennu. Accomplishments of the scholars make this world a better place.”

Many of the college’s outstanding scholars, including nearly 100 scholarship recipients and several faculty members, gathered at the reception, along with dozens of donors. Emcee Cindy Klingberg, a 1988 industrial engineering alumna, announced that she’ll be retiring from Raytheon Missile Systems in April after 20 years with the company and 30 as a working engineer.

“It was because of my foundation and education in industrial engineering at the University of Arizona that I was able to be successful in an industrial organization,” she said. “It makes me feel good about retiring and leaving, because I know we’re making way for these talented students in the workforce.”

Monique Martinez, a sophomore honors student majoring in biomedical engineering and minoring in math, biochemistry and art history, told the group a video of a little girl walking for the first time using a prosthetic leg inspired her to pursue biomedical engineering. She wanted to make a difference in the lives of people who needed it most.

The recipient of the W.E. & Lucille Barnum Scholarship researched schools carefully before selecting the UA’s biomedical engineering program, where she’s involved in the college’s Engineering Ambassadors program, MathCats, the Society of Women Engineers and Summer Engineering Academy. As an undergraduate researcher in an orthopaedic research lab at Banner – University Medical Center, she’s helping develop technology that uses 3D-printed scaffolding and a patient’s own cells to help people regrow bones.

“It’s been amazing being a part of a project that has the potential to help thousands of people all over the world -- the reason I wanted to become a biomedical engineer in the first place,” Martinez said. “I’m not entirely sure what my future holds, but with the help of the College of Engineering, I’ll be able to contribute to society in any way I decide.”

“Your generosity, engagement and support of our students is unbelievable,” interim Dean Larry Head told the group. “The impact that you have by allowing students to not have to worry about getting a job, or by giving them the extra bit of money they need to buy a computer or an Arduino: These are game changers.”

“These scholarships make you feel that someone saw and is recognizing your work,” he said. “And the financial support lets you be focused on what you’re doing as a researcher, and not on daily living costs.”

Mechanical engineering senior Jake Spaulding was in the U.S. Army before he started college, so the GI Bill paid for most of his time as a student. But his allowance ran out for his last semester, so he applied for and received both a da Vinci scholarship and a Bernard A. and Frances M. Weideman Scholarship.

“Having that scholarship really drove home being able to push through to the finish line,” he said, adding that he’ll be going on to work as a test engineer at Ball Aerospace in Colorado. “And they say you can’t get your dream job out of college.”

Melissa Requist, an honors junior double-majoring in biomedical engineering and music performance, said scholarships like the Thomas R. Brown Scholarship and Roberto Cook Scholarship she received this year are what allow her to work in campus labs as a volunteer student researcher.

“Because of that research experience, I now have an internship at the National Institutes of Health this summer,” she said. “Having this scholarship allows me to do that.”

Christian Montoya, a 2015 chemical engineering and computer science graduate, has sponsored a scholarship for the college for three years in a row, wanting to give back to fellow Wildcats now that he’s employed at Microsoft. One of this year’s recipients was Robert Macdonald, an electrical engineering junior who said that scholarships help him focus on his studies rather than worry about student loans. Meeting such a young donor got him thinking about ways he could give back as well.

“It’s inspiring,” he told Montoya. “I think I’ll do the same thing when I graduate.”