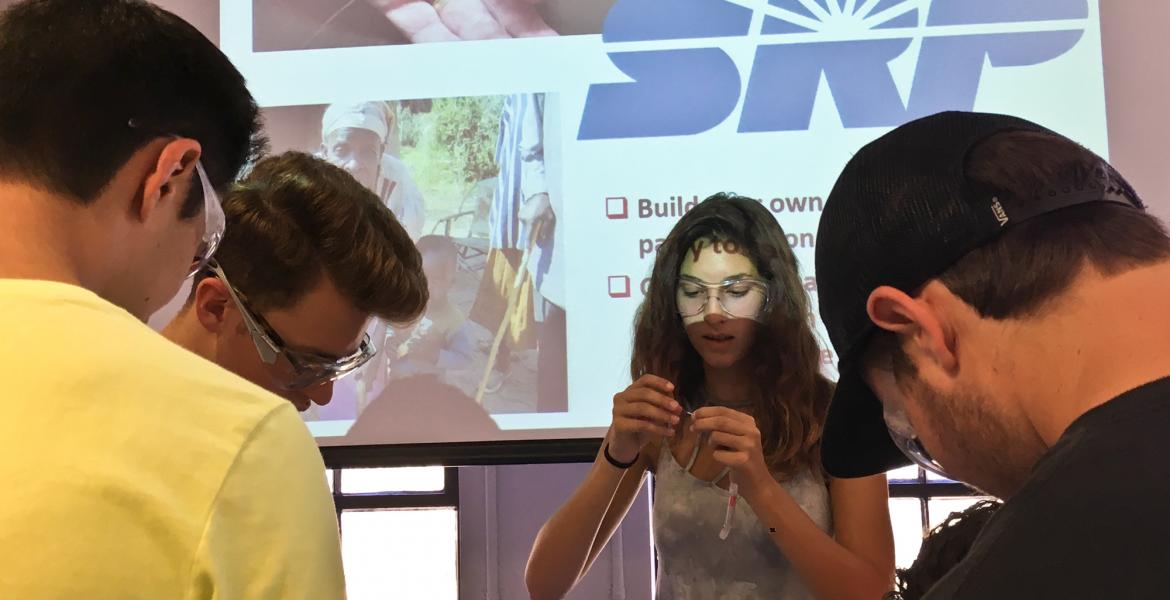 By
Jill Goetz
Time to read
2 minutes
Print
a- a+
Read so far
A partnership between the UA College of Engineering and the Salt River Project is enhancing students’ hands-on learning while helping hurricane victims ensure their drinking water is safe.

On September 20, 2017, as University of Arizona freshmen engineering students were making water pasteurization indicators for their Engineering 102 class, Hurricane Maria was making landfall on Puerto Rico. The storm destroyed the island’s power grid, leaving more than 3 million residents without electricity and taking down its water supply.

The students didn’t know it then, but their handiwork would go on to help Puerto Ricans pasteurize water and help prevent water-borne illness, thanks to the efforts of instructors and a classmate, and to a donation from Arizona-based public utility the Salt River Project.

The student-made water pasteurization indicators, or “WAPIs,” are simple, low-cost, reusable devices containing a soy wax that melts when water reaches 149 degrees Fahrenheit. That’s far below boiling, but hot enough to kill microbes like Giardia and E. coli. In areas with dire fuel shortages and crippled or nonexistent water sanitation systems, WAPIs can be lifesavers.

Some UA students taking ENGR 102, the College of Engineering’s required introductory course, have made WAPIs in past years. But in fall 2017, all 500 students in the class made them, thanks to a $22,000 gift from SRP to the College to support course supplies and instructional materials and UA Engineering student clubs.

At a WAPI-making party on September 20 in the Old Engineering Building, students grabbed pliers and drills, fishing line and lighters and super glue and soy-based wax from a dozen tables to assemble the devices, which are essentially polycarbonate tubes containing balls of wax.

They tested the WAPIs in pots of hot water before sealing them in zip-lock bags and loading them into boxes, their destination unknown.

One of the students, Gerardo Figueroa, has a close friend living in Puerto Rico.

“When the storm struck, I immediately worried about him and his family,” Figueroa said. “I messaged him to see how he was. When he was finally able to connect with me several days later, he described the devastation. I wanted to help in any way I could. When my section instructor, Ken George, suggested sending WAPIs to him, I didn’t hesitate.”

In the following weeks, two shipments of WAPIs slowly made their way to Figueroa’s friend, Andres Arocho, who volunteers with San Juan-based nonprofit organization Toldos Pa' Mi Gente, which has distributed the WAPIs and instructions for using them to many residents. Amid continued devastation, WAPIs provide a small measure of comfort in assuring parents that the water and food they serve their children is not likely to make them sick.

The Salt River Project’s donation to ENGR 102 is just one example of its partnerships with the College of Engineering.

For several years, the utility has contributed $15,000 in fellowships for graduate students in civil engineering.

“The Salt River Project fellowship is allowing me to work alongside Pima County engineers on important problems in hydrology and flood control,” said PhD student Kang Zhou, who is focusing on hydraulics. “It is rewarding to help maintain local bridges and protect people from floods while I'm still in graduate school.”

SRP also supports engineering student clubs and sponsors engineering design projects. Last year, a team of seniors majoring in electrical, mechanical and systems engineering designed a way for SRP to more accurately record natural gas usage at its power plants. The SRP team in the 2017-2018 academic year is evaluating how to incorporate phase-change materials, which can store and release large amounts of energy, in the design of more energy-efficient residential homes.

“We aim to create new learning experiences and challenges for UA students,” said Mike Hummel, SRP deputy general manager of resources and finance. “By presenting them with real-world situations we can help teach students how to apply past experience and knowledge to new settings important to SRP. That’s what engineering is fundamentally about -- problem solving, given specific parameters. Making and sending the WAPIs to help residents in hurricane-ravaged Puerto Rico is a perfect example of this.”

Ultimately, the Salt River Project and its customers may be the greatest beneficiaries of the growing utility’s partnerships with the UA.

“As a utility, we understand and value the University of Arizona’s role in preparing the engineers we rely on in our workforce and, more broadly, the role of engineers in developing our state,” Hummel said.

The SRP has hired several Wildcats as engineers. They include Sara McCoy, who earned her UA bachelor’s degree in mechanical engineering in 1993 and in 2014 became the first women to manage an SRP power plant.