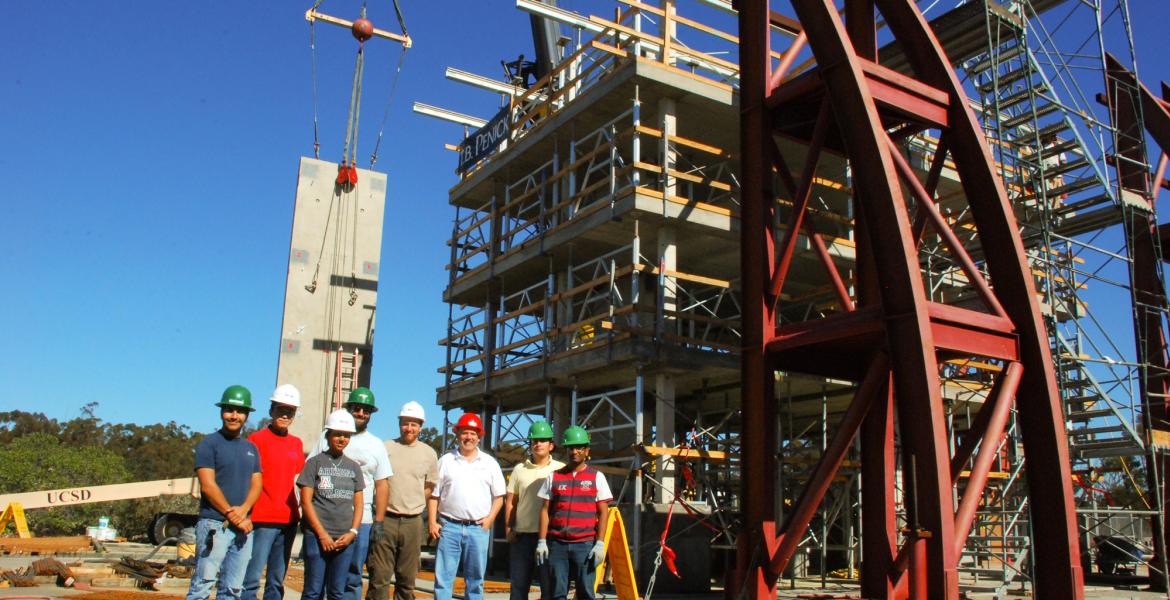 By
Emily Dieckman
Time to read
2 minutes
Print
a- a+
Read so far
Civil engineering professor is off to Italy’s “Florence of the South” to teach and conduct research about earthquake engineering.

In the late 19th century, Robert Fleischman’s great-grandfather was an architect, engineer and builder in southern Italy before he immigrated to the United States. With the receipt of a Fulbright U.S. Scholar Program Award to Italy, Fleischman is returning to his roots. In February, he’ll head to the University of Salento in Lecce for six months to lead an integrated research and teaching program in earthquake engineering.

“When I was in high school, I was just interested in sports, and my mom said, ‘I want you to be an engineer,’” Fleischman said. “She gave me a protractor that belonged to my great-grandfather, and that set me on my path to where I am today.”

A professor of civil and architectural engineering and mechanics at the University of Arizona, Fleischman is one of more than 800 U.S. citizens who will teach, conduct research and provide expertise abroad through the Fulbright U.S. Scholar Program, the flagship international educational exchange program sponsored by the U.S. government and designed to build lasting connections between the people of the United States and the people of other countries.

His teaching program will focus on two tracks: how to build the earthquake-resistant buildings of tomorrow and how to successfully retrofit existing historic buildings that present a danger to people, particularly in southern Italy. It will include a seminar series, short courses and a hands-on five-day workshop. The seminars will be available to undergraduate and graduate students at the University of Salento, streamed as a webinar to other universities in Southern Italy and offered to local practicing engineers.

He will apply his research into precast concrete to investigating prefabrication methods for the construction of new earthquake-resistant buildings in southern Italy’s urban centers. He’ll also use his knowledge of using fiber-reinforced polymers to strengthen beams, arches and columns to develop approaches for retrofitting older existing buildings.

“One of my colleagues in Italy was looking at a building where the bottom was from Roman times, on top of that was a medieval wall, and on top of that was some Renaissance construction,” Fleischman said. “One building had all of this history, with different materials and techniques linking it to the cultural and historical heritage. While I know more about modern construction, my colleague in Italy is an expert on these older buildings, so there’s an opportunity for exchange."

Earthquake-Proofing Around the World

Fleischman is looking forward to expanding his area of study and exposing Italian students to some of the United States’ leading earthquake engineering research, and it’s an opportunity he’s well prepared for. Fleischman has led large research projects that developed safer building methods and influenced seismic code provisions. He has coordinated post-earthquake efforts in Chile and Japan, and traveled to Haiti and New Zealand in the wake of major earthquakes as part of a post-quake reconnaissance team.

Nearly $4 million of his research portfolio has involved collaboration with at least three universities, in places such as Italy, New Zealand, Mexico, England and Kazakhstan. Through hosting visiting scholars from Chile, Iran and Palestine; teaching a short course for Asian and Middle Eastern scholars on earthquake engineering; and developing curriculum for a degree program at the American University of Phnom Penh, he’s become well-versed in working with different cultures.

He’s no stranger to Italy, either: He delivered two short courses at the University of Rome in 2012, participated in an Italy-led European Union commission research project and has attended workshops on multiple Italian earthquakes. He also speaks Italian at an intermediate level.

“On a personal level, my wife and I are both half Italian, so I’m excited about translating my notes into Italian and interacting with people bilingually,” he said. “I’m also excited to contribute to the department’s effort to expand its international profile in both education and in research.”