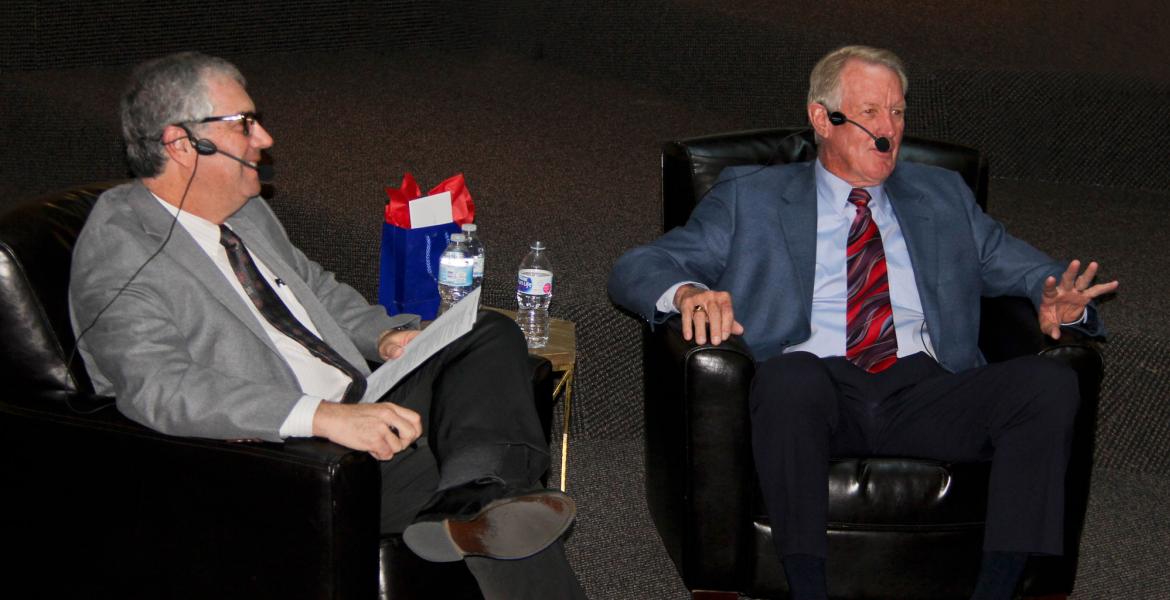 By
Emily Dieckman
Time to read
3 minutes
Print
a- a+
Read so far
Dave Crawford, BS 1972, visits UA Engineering students to talk technical skills, taking action and the tough decisions that come with being at the helm of an employee-owned construction company.

University of Arizona engineering students were readying their pens and laptops to take note of the advice offered by retired Sundt Construction CEO Dave Crawford, but they first thing they took note of was his shoes. The tips were painted with a bright red and purple desert scene -- complete with a saguaro and a snake -- and bright red laces tied the look together.

“I didn’t want you to think all engineers had to be stuffy,” Crawford grinned.

At his Feb. 26 talk, “From Construction Site to Corner Office,” the second installment in the spring 2018 speaker series Lessons in Engineering Leadership, Crawford answered student-submitted questions from Acting Provost Jeff Goldberg and took questions from the approximately 70 students and industry professionals in the audience.

Building His Way to the Top

Crawford started working at Sundt as a laborer in 1968 to help pay his way through school at University of Arizona, where he earned his bachelor’s degree in civil engineering. He recalled his hiring process fondly.

Eventually, he did leave, but not until 2016, when it was time to retire after 48 years with the company, and after he had served as CEO for six years, been named a UA Alumnus of the Year in 2012, been elected to the National Academy of Construction in 2014 and received News Record’s 2017 Legacy Award. He also serves as a board member of the Sundt Foundation, which has given more than $7.6 million dollars to nonprofits across the United States.

There weren’t internships at UA when Crawford was a student, he explained, but he wouldn’t have changed his experience for the world.

“I thought working in the field for four years was as valuable, if not more valuable, than working in the office all that time,” he said. “I got the chance to pour a lot of concrete and work with some really good people.”

Crawford is passionate about the value of technical education and advocates for the government to increase funding to nonacademic technical training programs. While a career in labor isn’t for everyone, Crawford believes the approximately two-thirds of Americans without college degrees could find meaningful occupations by helping to fill a nationwide shortage of skilled laborers.

A Man of Action

When asked about some of the biggest learning experiences of his career, Crawford first admitted he’d made his fair share of mistakes, and reminded students that everybody does -- the key, he said, is move on and do better next time.

He also faced disappointment when Sundt was not selected to build the UA’s Student Union Memorial Center -- the very building where his talk was being held. The selection committee for the design-build competition was packed with 20 people, many of whom had little experience in construction. Rather than complain in silence, he set out to change the industry’s future.

In 2000, Crawford helped draft and pass a law in the Arizona State Legislature requiring selection committees to have only seven members (or up to nine in special cases) and to contain a licensed contractor and either an architect or an engineer.

What We’re Looking For

Crawford didn’t walk into his job at Sundt planning to become CEO, but he’d always had ambition, determination and a love for leading and accepting new challenges, including relocating.

“I think I had 14 addresses in my first 10 years with the company,” he said. “You have to consider that as an opportunity, not a threat.”

When asked what qualities he values in his employees and potential employees, Crawford listed intelligence, determination, willingness to relocate and accept new opportunities, empathy, ambition and communication skills.

Other must-haves? Trustworthiness and loyalty.

“Do I expect all of you to work for the same place for 50 years? No,” he said. “But if you’re interested in working for 15 or 16 different places, I’m probably not interested in talking to you. A lot of money and resources will go into training you, and I want to know there’s going to be a return on that investment.”

His interest in pairing employees with positions where they are the happiest and most productive -- and in giving young people a future as bright as his shoes -- was apparent when he spoke about the magic that happens when you get the right person in the right position.

“They go home, they celebrate their successes, they don’t develop ulcers and they’re happy,” he said.

Register and submit your questions now to see Laura McGill, vice president of engineering at Raytheon Missile Systems, speak in the final installment of the spring Lessons in Engineering Leadership series on Wednesday, March 28, 2018.

McGill oversees more than 5,000 engineers developing high-tech weapons and working on some of the world’s toughest engineering challenges.