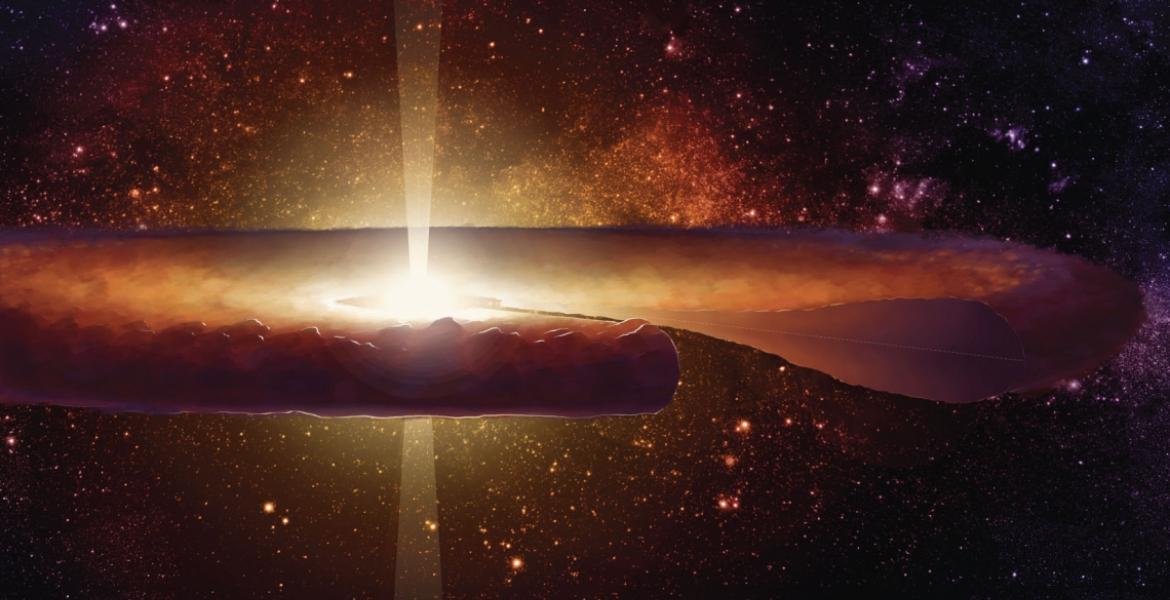 Artist’s illustration of the early solar system, at a time when no planets had formed yet. A swirling cloud of gas and dust surrounded the young sun. The cutaway through this so-called protoplanetary disk shows its three-dimensional structure.Heather Roper

By
Daniel Stolte
Time to read
3 minutes
Print
a- a+
Read so far
Combining atomic-scale sample analysis and models simulating likely conditions in the nascent solar system, a new study reveals clues about the origin of crystals that formed more than 4.5 billion years ago.

A research team led by the University of Arizona, including representatives from the College of Engineering, has reconstructed in unprecedented detail the history of a dust grain that formed during the birth of the solar system more than 4.5 billion years ago. The findings provide insights into the fundamental processes underlying the formation of planetary systems, many of which are still shrouded in mystery.

For the study, the team developed a new type of framework, which combines quantum mechanics and thermodynamics, to simulate the conditions to which the grain was exposed during its formation, when the solar system was a swirling disk of gas and dust known as a protoplanetary disk or solar nebula. Comparing the predictions from the model to an extremely detailed analysis of the sample's chemical makeup and crystal structure, along with a model of how matter was transported in the solar nebula, revealed clues about the grain's journey and the environmental conditions that shaped it along the way.

The grain analyzed in the study is one of several inclusions, known as calcium-aluminum rich inclusions, or CAIs, discovered in a sample from the Allende meteorite, which fell over the Mexican state of Chihuahua in 1969. CAIs are of special interest because they are thought to be among the first solids that formed in the solar system more than 4.5 billion years ago.

Similar to how stamps in a passport tell a story about a traveler's journey and stops along the way, the samples' micro- and atomic-scale structures unlock a record of their formation histories, which were controlled by the collective environments to which they were exposed.

"As far as we know, our paper is the first to tell an origin story that offers clues about the likely processes that happened at the scale of astronomical distances with what we see in our sample at the scale of atomic distances," said Tom Zega, a professor in the University of Arizona's Lunar and Planetary Laboratory and the first author of the paper, published in The Planetary Science Journal.

Zega and his team analyzed the composition of the inclusions embedded in the meteorite using cutting-edge atomic-resolution scanning transmission electron microscopes – one at UArizona's Kuiper Materials Imaging and Characterization Facility, and its sister microscope located at the Hitachi factory in Hitachinaka, Japan.

The inclusions were found to consist mainly of types of minerals known as spinel and perovskite, which also occur in rocks on Earth and are being studied as candidate materials for applications such as microelectronics and photovoltaics.

Similar kinds of solids occur in other types of meteorites known as carbonaceous chondrites, which are particularly interesting to planetary scientists as they are known to be leftovers from the formation of the solar system and contain organic molecules, including those that may have provided the raw materials for life.

Precisely analyzing the spatial arrangement of atoms allowed the team to study the makeup of the underlying crystal structures in great detail. To the team's surprise, some of the results were at odds with current theories on the physical processes thought to be active inside protoplanetary disks, prompting them to dig deeper.

"Our challenge is that we don't know what chemical pathways led to the origins of these inclusions," Zega said. "Nature is our lab beaker, and that experiment took place billions of years before we existed, in a completely alien environment."

Zega said the team set out to "reverse-engineer" the makeup of the extraterrestrial samples by designing new models that simulated complex chemical processes, which the samples would be subjected to inside a protoplanetary disk.

"Such models require an intimate convergence of expertise spanning the fields of planetary science, materials science, mineral science and microscopy, which was what we set out to do," added Krishna Muralidharan, a study co-author and an associate professor in the UArizona's Department of Materials Science and Engineering.

Based on the data the authors were able to tease from their samples, they concluded that the particle formed in a region of the protoplanetary disk not far from where Earth is now, then made a journey closer to the sun, where it was progressively hotter, only to later reverse course and wash up in cooler parts farther from the young sun. Eventually, it was incorporated into an asteroid, which later broke apart into pieces. Some of those pieces were captured by Earth's gravity and fell as meteorites.

The samples for this study were taken from the inside of a meteorite and are considered primitive – in other words, unaffected by environmental influences. Such primitive material is believed to not have undergone any significant changes since it first formed more than 4.5 billion years ago, which is rare. Whether similar objects occur in asteroid Bennu, samples of which will be returned to Earth by the UArizona-led OSIRIS-REx mission in 2023, remains to be seen. Until then, scientists rely on samples that fall to Earth via meteorites.

"This material is our only record of what happened 4.567 billion years ago in the solar nebula," said Venkat Manga, a co-author of the paper and an assistant research professor in the UArizona Department of Materials Science and Engineering. "Being able to look at the microstructure of our sample at different scales, down to the length of individual atoms, is like opening a book."

The authors said that studies like this one could bring planetary scientists a step closer to "a grand model of planet formation" – a detailed understanding of the material moving around the disk, what it is composed of, and how it gives rise to the sun and the planets.