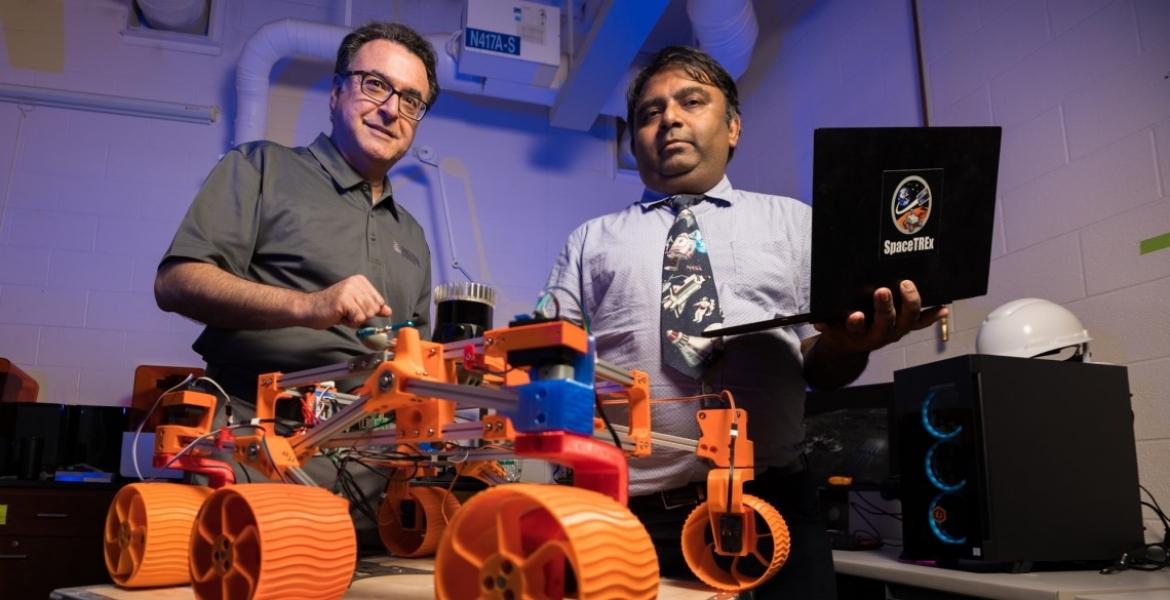 University of Arizona engineering faculty members Jekan Thanga (right) and Moe Momayez have received $500,000 in NASA funding for a new project to advance space mining methods that use swarms of autonomous robots. They are pictured with a low-cost, rapidly designed, 3D-printed rover prototype used for testing a new generation of miniature sensors for applications in lunar mining.(Photo: Chris Richards/  University of Arizona)

By
Emily Dieckman
Time to read
3 minutes
Print
a- a+
Read so far
Aerospace and mining engineers are mapping out a plan for harvesting the moon's resources using autonomous robot swarms and new excavation techniques.

With scientists beginning to more seriously consider constructing bases on celestial bodies such as the moon, the idea of space mining is growing in popularity.

After all, if someone from Los Angeles was moving to New York to build a house, it would be a lot easier to buy the building materials in New York rather than buy them in Los Angeles and lug them 2,800 miles. Considering the distance between Earth and the moon is about 85 times greater, and that getting there requires defying gravity, using the moon's existing resources is an appealing idea.

A University of Arizona team, led by researchers in the College of Engineering, has received $500,000 in NASA funding for a new project to advance space-mining methods that use swarms of autonomous robots. As a Hispanic-Serving Institution, the university was eligible to receive funding through NASA's Minority University Research and Education Project Space Technology Artemis Research Initiative.

"It's really exciting to be at the forefront of a new field," said Moe Momayez, interim head of the Department of Mining and Geological Engineering and the David & Edith Lowell Chair in Mining and Geological Engineering. "I remember watching TV shows as a kid, like 'Space: 1999,' which is all about bases on the moon. Here we are in 2021, and we're talking about colonizing the moon."

According to the Giant Impact Hypothesis, Earth and the moon came from a common parent body, so scientists expect their chemical compositions to be relatively similar. Mining on the moon's surface could turn up rare earth metals needed for technologies such as smartphones and medical equipment, titanium for use in titanium alloys, precious metals such as gold and platinum, and helium-3 – a stable helium isotope that could fuel nuclear power plants but is extremely rare on Earth.

To mine for ore embedded in rock on Earth, miners need to drill through the rock, which is one of Momayez's specialties. He's developed an electrochemical process to drill through rock five times faster than any other method. But lunar mining presents a new challenge.

"Here on Earth, we have an unlimited amount of energy to throw at breaking rocks," he said. "On the moon, you have to be a lot more conservative. For example, to break rocks, we use a lot of water, and that's something we won't have on the moon. So, we need new processes, new techniques. The most efficient way to break rocks on Earth is through blasting, and nobody has ever set off a blast on the moon."

Finding the best way to mine lunar materials from a laboratory space on Earth is a tall order for humans. That's where autonomous robot swarms come in.

Jekan Thanga, an associate professor of aerospace and mechanical engineering, is adapting a neuromorphic learning architecture technique, which he developed in his lab, called the Human and Explainable Autonomous Robotic System, or HEART. The system not only will train robots to work together on mining, excavation and even building tasks, but it will also allow the robots to improve their collaboration skills over time.

The team plans to build and train the robots here on Earth, so they can practice. Ultimately, the researchers envision a fully autonomous swarm of robots that doesn't need to receive instructions from Earth to mine materials and construct simple structures.

"In a sense, we're like farmers. We're breeding talent out of these creatures, or a whole family of creatures, to do certain tasks," Thanga said. "By going through this process, we help perfect these artificial creatures whose job it is to do the mining tasks."

The team still considers humans a critical part of space exploration, but these robot swarms could free up astronauts to focus on other critical mission elements.

"The idea is to have the robots build, set things up and do all the dirty, boring, dangerous stuff, so the astronauts can do the more interesting stuff," Thanga said.

Momayez and Thanga aren't alone in their enthusiasm. One of the reasons they decided to pursue this venture is that undergraduate students are so interested in it.

"Every time I got out and talk about space exploration, there's really a storm of students who are enthusiastic about mining," Thanga said. "Seeing all these students inspired to get involved has been a big drive."

Thanga's ASTEROIDS Laboratory runs a NASA-funded Undergraduate Research and Education Program, in which students spend a year leading their own research projects. In the past, students in the program have presented their work at conferences and worked on journal papers. With the new NASA funding, Momayez and Thanga intend to add a module to the program focused on space mining. Students will learn about both autonomous robot swarms and excavation techniques – in the classroom, in the laboratory and even in the university's student-run San Xavier Mine.

"They can test their robots at the mine, they can excavate, they can drill, they can blast," Momayez said. "And with the establishment of the new School of Mining and Mineral Resources, we hope to get more students from all over the world involved in mining."