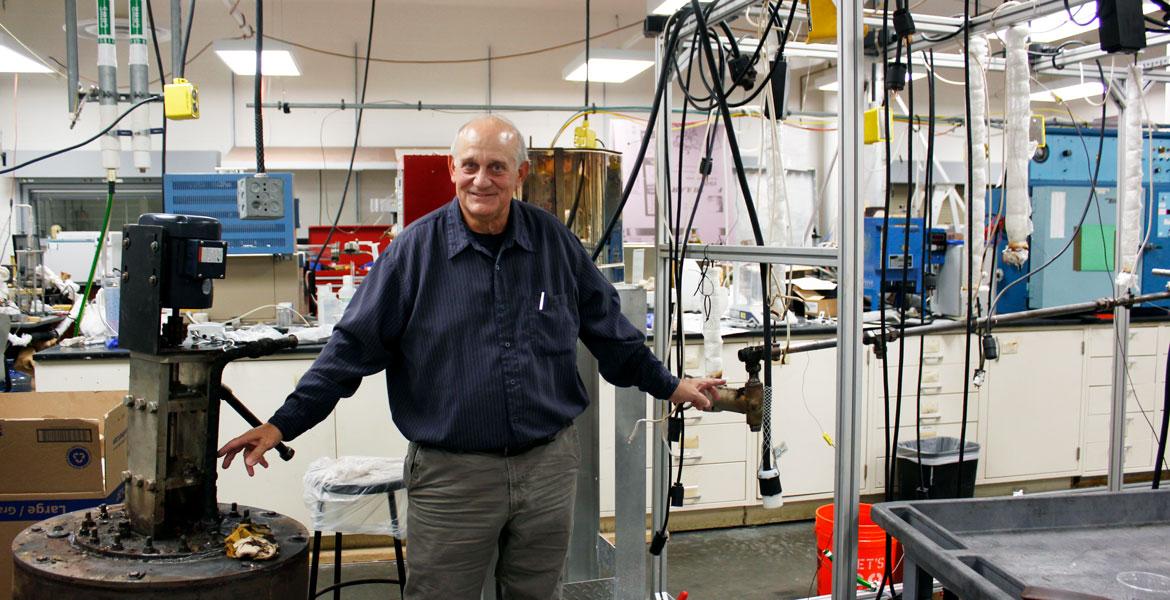 Dominic Gervasio in the lab of his co-primary investigator, Peiwen "Perry" Li, with a pump and a pipe used to research thermal energy.

By
Emily Dieckman
Time to read
3 minutes
Print
a- a+
Read so far
University of Arizona engineers are using $1M from the DOE to minimize corrosion in large-scale solar energy production.

The advantages of solar power are well documented. The U.S. Office of Energy Efficiency and Renewable Energy projects that meeting 27% of the U.S. electricity demand with solar power by 2050 could eliminate 8 billion metric tons of carbon dioxide from the atmosphere and provide $400 billion in health and environmental benefits across the country.

A team of University of Arizona engineers led by Dominic Gervasio, associate professor of chemical and environmental engineering, is advancing methods for harvesting the power of the sun by detecting and arresting corrosion in the pipes that contain it. A three-year, $1 million grant from the Department of Energy is funding the work.

Despite their popularity, photovoltaic solar panels aren’t the only way to harness solar power.

A method called concentrating solar power uses the sun to heat a mixture of chloride salts, such as table salt, to about 800 degrees Celsius, which is around 1,500 degrees Fahrenheit. Then, the molten salt travels through a metal pipe to a heat exchanger and heats water on the other side of the exchanger to make steam. The steam spins a turbine, just like in a conventional power plant, to make electricity, all without consuming any coal, oil or natural gas. Because extra molten salt can be produced during the day and stored, this technique makes it possible to generate electricity derived from solar power even at night.

However, when air leaks into these molten chloride salts, oxygen and water enter the mix, and the aerated molten salt mixture can cause the inside of the pipes to corrode, or rust.

“The rusting rates are on the order of microns, or millionths of a meter, per year -- probably lower than 30 microns when there is no water or oxygen in the salt, but can be as high as 3,000 if air leaks into the salt,” Gervasio said. “Even 3,000 microns a year corresponds to a small mass change over the period of a day, but unchecked over weeks, that could pop a hole in the pipe.”

Working with Tech Launch Arizona, the office of the UA that commercializes inventions stemming from university research, Gervasio and his colleagues launched a startup called Caltrode in 2016. The company is centered around an invention called a “reference electrode,” which is a sensor that allows technicians to control the electrical potential of a metal pipe.

“By imposing the right voltage, you can make the potential of the metal pipe very negative, and if you make it sufficiently negative, the metal will not corrode,” Gervasio said.

Without a reference electrode to help control the potential of the pipe, oxygen or water entering through a leak in the pipe causes the metal’s potential to change, so the metal starts corroding as it donates electrons to the water and oxygen. With the reference electrode controlling the electrical potential of the pipe, even though electrons come out of the pipe, the metal doesn’t corrode. What gives? Scientists take advantage of a method called cathodic protection, which makes use of a sacrificial anode. The sacrificial anode is electrically connected to the pipe and has a more negative electrical potential than the metal of the pipe itself. The zinc rod in your water heater is one example of this.

While cathodic protection has been used on the outside of pipes before, this team will be the first to use this method on the inside of a pipe with molten salts. Their application is also unique. Rather than shorting the sacrificial anode directly to the pipe, as the zinc rod is in a water heater, they’re inserting a power supply between the two, so as the sacrificial anode starts giving away electrons, a current is seen at the power supply, alerting technicians about a leak.

“If there’s a leak in the pipes, we want to know,” Gervasio said “So, this current does two things: It keeps the pipe at the right potential, protecting it from popping a hole, and it’s a signal that there is a leak, so timely corrective action can be taken.”