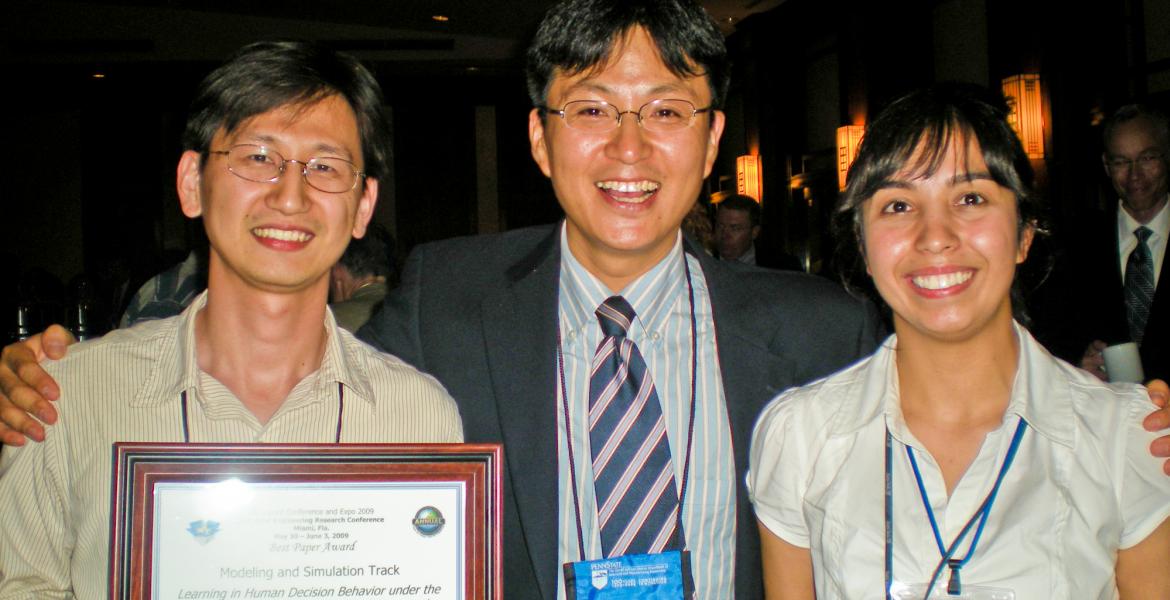 Associate professor Young-Jun Son, center, and PhD students Seungho Lee, left, and Nurcin Celik celebrate their awards at a reception at the IIE Conference and Expo in Miami.

By
Pete Brown
Time to read
1 minute
Print
a- a+
Read so far
Research in simulation and modeling of human behavior by UA Department of Systems and Industrial Engineering continues to acquire national recognition.

Associate Professor Young-Jun Son and two of his students, Seungho Lee and Nurcin Celik, all of the Department of Systems and Industrial Engineering, won three awards June 1 at the 2009 Annual Conference and Expo of the Institute of Industrial Engineers in Miami.

Son and PhD candidate Seungho Lee took the best paper award in the area of modeling and simulation, for their paper titled Dynamic Learning in Human Decision Behavior under the Extended Belief-Desire-Intention Framework.

"Receiving prestigious awards and being recognized by our major society is truly exciting and encouraging," Son said. "This is great motivation for our team to keep up the good work."

Son’s research group is one of the most renowned in the field of industrial engineering. His group's research in simulation and modeling of human behavior involves creating computer programs that mimic human decision-making behavior. "In our research work, we try to focus on high productivity as well as high quality," Son said.

Son's group has been applying behavior-modeling techniques to attempt to predict how people react to disasters, such as a bomb exploding on a city street. The group created the city area affected by the explosion in a virtual reality environment, and human subjects donned the VR goggles and hit the virtual city streets in the aftermath of the blast.

Researchers then watched how the subjects reacted to virtual smoke pouring out of buildings, emergency vehicles hurtling by with sirens blaring, panicked crowds rushing toward them, helicopters buzzing overhead, and dozens of other disorienting stimuli. These observations were then incorporated into intelligent evacuation management software programs

Son attributes these awards, and his group's high profile, to the magnitude of the subjects they are tackling. "The large-scale systems we address in our research, such as manufacturing supply chains and human social networks, greatly affect the economic prosperity as well as human welfare -- the grandest national challenges -- of our nation," he said.

In addition to these recent awards, the group has received numerous other awards from the Institute of Industrial Engineers.

In 2008, Seungho Lee and Son won the best paper award in the area of homeland security at the Industrial Engineering Research Conference in Vancouver, Canada. At the same conference, Lee also received best PhD scientific poster award in the PhD colloquium.

At the 2005 Industrial Engineering Research Conference in Atlanta, Son received the Outstanding Young Industrial Engineer Award. He also won the best paper award, with five of his graduate students, in the area of modeling and simulation.