Professor Achintya Haldar of the UA civil engineering and engineering mechanics department has been made a distinguished member of the American Society of Civil Engineers. 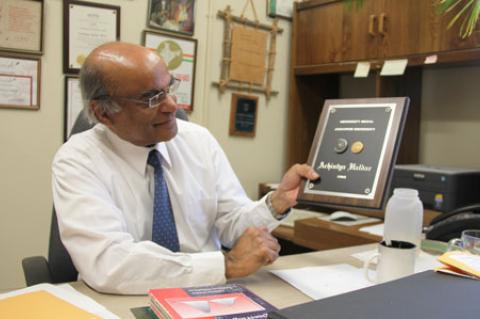 Professor Achintya Haldar of the UA civil engineering and engineering mechanics department shows the medal he received from Jadavpur University in 1968.

Distinguished ASCE members are elected by the ASCE board of directors based on their global reputation of outstanding leadership and research in engineering. In the society the honor is second only to becoming ASCE president.

Haldar's citation by ASCE refers to his exemplary 44-year career as a world-class researcher, and his work as a peerless educator, mentor and innovative practitioner.

The ASCE noted that Haldar's work had fundamentally changed structural engineering research, education and practice. His work with industry includes proposing maintenance strategies for a major transit system, developing methods to assess the effects of missile impacts on nuclear power plants, and designing methods to improve the reliability of river navigation systems.

Haldar's research includes earthquake engineering and mathematical methods for determining structural reliability. In particular, he is interested in computer-based simulation and analysis of structures to determine how they react to different loads and stresses.

The massive amounts of number crunching required by conventional simulation methods could take years for computers to churn through, so Haldar applies theoretical mathematical methods to minimize computer run times.

This enables him to conduct millions of analyses in a matter of days and creates a more statistically accurate picture of how a structure has been damaged, for instance, by an earthquake or by the wear and tear of old age.

He is currently editing a book on this area of research, titled Health Assessment of Engineered Structures: Bridges, Buildings and Other Infrastructures. "Our structures, buildings, they are aging," Haldar said. "And we do not have the money to fix them." Measuring the extent of structural damage is also crucial in determining how badly, and precisely where, earthquakes have damaged new buildings.

Haldar maintains that a building struck by an earthquake is not necessarily doomed to demolition. "We need to find out where the damage is," he said. "Which beam or which column has the damage? And whether that damage is going to cause structural failure. All damage may not create a structural failure."

Many buildings and civil engineering structures are fitted with sensors that can identify damaged areas. They are often called smart sensors, but Haldar has his doubts because earthquake damage interferes with signals detected by the sensors. "There's no such thing as a smart sensor," he said. "These sensors are noise-contaminated."

More important, Haldar said, is that it is not possible for sensor instrumentation to cover every part of a large building or structure. However, his methods allow data gleaned from a small part of a structure to be extrapolated to its entirety. "This is the magic," he said. "Just take a little bit of information, and we can then identify the whole structure and we can see where the damage is. Then we can send in an inspector to check a particular beam, so there's no need to stop working in the building."

Unlike insurance companies, who deal heavily in risk management, civil engineers do not have a lot of data to draw from, Haldar said. So Haldar's computer models provide engineers with a tool to determine acceptable risk, which in turn determines remedial action to be taken.

"As a structure degrades, we need to figure out the amount of degradation and the cause of that degradation, then whether we should let that degradation continue," Haldar said. "For example, do we go for another one year before doing anything, or do you fix that element immediately? Or do nothing? Or replace the whole thing? The cost could be zero dollars or a million dollars."

The assumptions made in the face of uncertainty are at the core of Haldar's analytical methods, and at the core of civil engineering itself. We can never know if a structural design is successful until the earthquake strikes. "I tell my students we have plenty of experience at post-failure analysis," Haldar said. "After the failure, we can say what happened. But we cannot stop that failure."

The ASCE also noted Haldar's outstanding teaching and mentoring. He has received excellence in teaching awards from Georgia Tech and the University of Arizona, and recognition from Illinois Institute of Technology.

He has advised many doctoral and master's students, some of whom have themselves become highly respected faculty members at academic institutions in the U.S., Canada, Korea, Mexico, Taiwan and Jordan.

During his 24 years in the College of Engineering, Haldar has received dozens of UA awards. In 2011 several professional engineering societies jointly named him Southern Arizona Engineering Educator of the Year.

In 2007 Haldar received an honor from his native country, where the Nonresident Indian Welfare Society in New Delhi selected him to receive the Hind Rattan Award. Hind Rattan is Hindi for "Jewel of India." This private but influential society makes the award to members of the Indian diaspora for outstanding services, achievements and contributions.

Haldar was an inaugural da Vinci fellow in 2005. Da Vinci fellows are selected for sustained contributions to teaching, research and service by the da Vinci Circle, the UA College of Engineering's donor society whose patrons support faculty and students with gifts and contributions, and by funding fellowships and scholarships.

Haldar received the 1996 Arizona Governor's Recognition Award, and in 1984 was one of the first recipients of the Presidential Young Investigator Award made by President Ronald Reagan and the National Science Foundation.