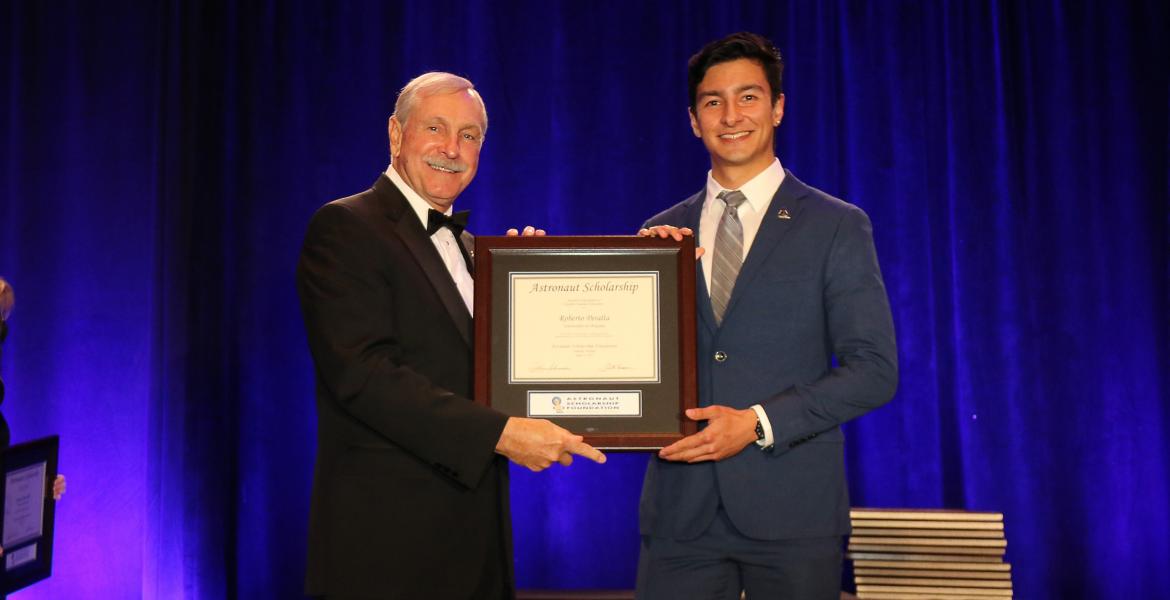 By
Emily Dieckman
Time to read
3 minutes
Print
a- a+
Read so far
Roberto Peralta looks toward serving his global community by designing low-cost prosthetic limbs.

Roberto Peralta has known since he was a Lego-loving kid that he would one day work with prosthetics – particularly robotic arms. As a child at the farmer’s market with his dad, he would tell other vendors that someday, he’d earn three master’s degrees and two PhDs. These days, he figures he’ll settle for just the one PhD.

The mechanical engineering senior and National Hispanic Scholar is an undergraduate researcher who has worked on projects ranging from flexible biomedical devices to Mars-exploring robots. He also happens to speak four languages. Among his most recent accomplishments is being named as Astronaut Scholar. The Astronaut Scholarship Foundation supports top scholars in science, technology, engineering and mathematics. It aids the United States in retaining world leadership in technology and innovation while commemorating the legacy of America’s pioneering astronauts. The 2021 Astronaut Scholar Class includes 60 students from across the nation.

“Roberto is a superstar young engineer with a great future ahead of him,” said Danielle Barefoot, program administrator for internal grants at the University of Arizona and former assistant director of the office of nationally competitive scholarships. “He is not afraid to fail, and his ‘never quit’ spirit truly sets him apart from his peers. I have no doubt that Roberto will achieve his aspirations of one day revolutionizing prosthetics to make them more accessible to all peoples.”

Peralta grew up surrounded by engineers, including his father – who earned a bachelor’s and master’s degree from the University of Arizona and a PhD from Arizona State University in the 1980s – so STEM was a natural pathway. During high school at Brophy College Preparatory in Phoenix, Peralta’s interest in working with prosthetics was reinforced when he went on a mission trip to Haiti and met many amputees.

“I saw that these people were so capable, even though they were missing arms,” he said. “They didn’t let that stop them. At the same time, I knew that if they did have arms, they would be able to do more and provide for their families much more easily.”

Peralta’s interest in serving a global community ties in with his enthusiasm for languages. As the child of two immigrants – his dad from Mexico and mom from Canada – he grew up speaking English and Spanish. His dad, an engineer who went on to open his own tortilla company, also had multifaceted interests. Peralta picked up French in high school and fell in love with the culture. In college, he became the president of Club Voilà, the University of Arizona’s French club, and started teaching himself German. He also studied abroad and worked as a camp counselor at an international school during high school, and now some of his closest friends live abroad.

“I really like the sentiment from Nelson Mandela, that when you speak to people in their learned tongues, you’re speaking to their brains, but when you speak in their native languages, you speak directly to their hearts,” said Peralta, a member of the Society of Hispanic Professional Engineers and Tau Beta Pi, the National Engineering Honors Society. “For me, language has always been a way for me to connect with my family, but also with international people who are like family to me.”

From Space Exploration to Biomedical Devices

Peralta was part of the National Science Foundation’s Research Experience for Undergraduates in summer 2021. He worked on integrated nanomanufacturing at Boston University. In summer 2020, he interned at the University of Arizona ASTEROIDS lab, helping design robots to explore Mars. But he’s actually been conducting research since his first year of college, when an email to biomedical engineering assistant professor Philipp Gutruf resulted in a lab position.

The Gutruf Lab focuses on creating devices that integrate intimately with biological systems. Because Peralta would someday like to work on prosthetics with bidirectional communications – which allow amputees to perceive sensations such as temperature through their prostheses – he knew learning more about biology and neurology would be valuable. In the Gutruf Lab, Peralta did CAD modeling and finite element analysis, and he is named on several published papers.

“Roberto has been very successful, and he has contributed to many projects in our lab,” Gutruf said. “He has jobs to pay his way through college, and at the same time, puts a lot of time and effort into the research. I think he’s good in the academic side as well as the research side.”

Peralta said his work ethic and desire to help others stems from his parents, who instilled in him the importance of kindness, as well as a multicultural identity. After graduation, he plans to earn a PhD in biomedical engineering, focusing on developing implantable devices that communicate bidirectionally with prostheses via the peripheral nervous system. Then, he will start a robotics prosthetic company where bidirectional communication capabilities are standard.

“Offering low-cost prosthetics that would have global reach is a way of touching hearts and lives,” he said. “I just hope I can help a lot of people – not just in my local community, but in my global community.”